Teacher at Sea Staci DeSchryver is the MVP of HICEAS Leg 1. 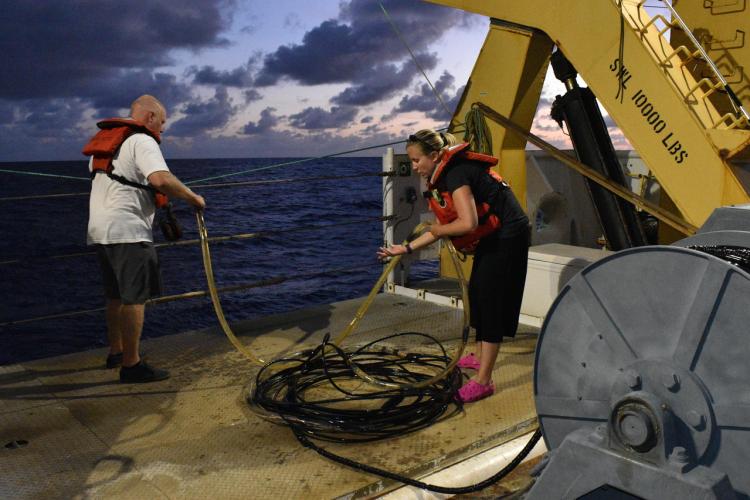 When Staci DeSchryver–an Oceanography, Meteorology, and Earth Science teacher at Cherokee Trail High School in Aurora, CO–starts her Oceanography class each year, she warns her students, “If you think being an oceanographer means you’re going to be studying whales all your life, that’s not going to happen.” She explains that while there are people who do study whales, the field of oceanography covers a wide range of topics, so as students and future oceanographers, she emphasizes that they will need to broaden their horizons. Staci was ecstatic when she learned of her acceptance as a NOAA Teacher at Sea (aka TAS) for the 2017 field season. However, she couldn’t help but be both excited and amused when she learned of her assignment–she was headed to Hawaii to study whales!

Staci sailed aboard NOAA Ship Oscar Elton Sette during Leg 1 of the Hawaiian Islands Cetacean and Ecosystem Assessment Survey (or HICEAS) from July 6 – August 2, 2017. HICEAS is a large-scale, 187-day survey to estimate how many cetaceans (whales and dolphins) are in Hawaii, examine their population structure, and understand their habitat. Chief Scientist Erin Oleson was thrilled for the chance to have a TAS participate in HICEAS because of the unique opportunity to have a communication specialist share the science with a readily-available network of students, colleagues, and members of the public. Ultimately, Erin and those of us on-board the Sette for HICEAS Leg 1 were pleasantly surprised to find that with Staci, we gained more than just a skilled and connected communicator; we also scored an engaged, dynamic, and invaluable addition to our team.

NOAA began its TAS program in 1990 and has since provided over 750 teachers from all 50 states, American Samoa, Puerto Rico, and Guam with hands-on research experience working and living at sea. TAS participants report a better understanding of ocean science and an increase in teaching ocean-related topics following their time as a TAS. Collectively, the knowledge and stories these teachers gained from their TAS experiences have reached hundreds of thousands of students across the nation. Staci is such a fan of the program that she has sailed as a TAS not once, but twice. Her first trip as a TAS was in 2011, when she sailed on NOAA Ship Oscar Dyson during a fisheries survey in the Bering Sea. Returning as a TAS in 2017, Staci felt like she was able to make more of the experience because some of the unfamiliar basics of ship life were second nature and less intimidating. On HICEAS, she already knew, for example, the ropes of getting food from the galley and how to quickly don a survival suit, so she was able to immediately focus on learning about the science and getting to know the ship’s personnel. 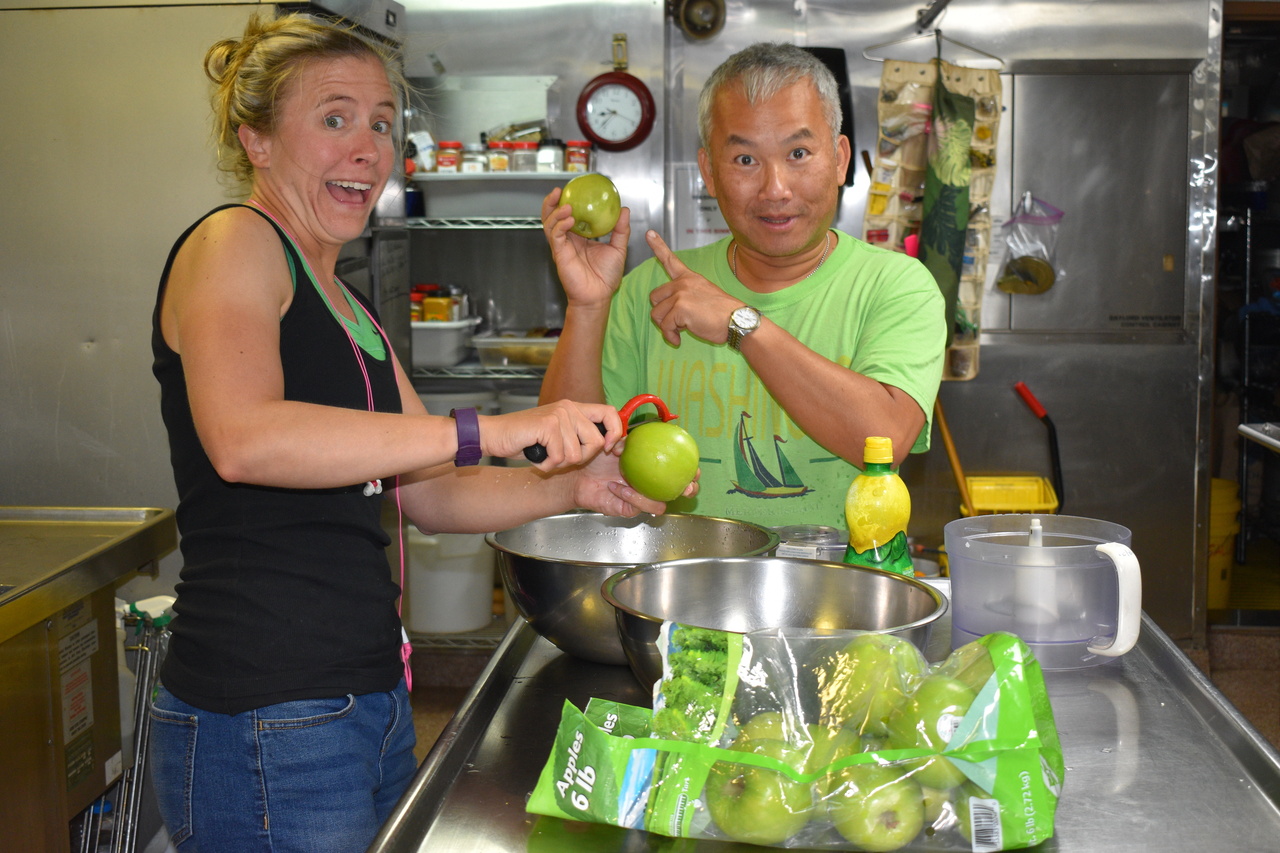 Once unfamiliar with a ship’s galley, Staci DeSchryver treated us to a delicious dessert with a little “help” from Medical Officer Hung “Doc” Tran. What dessert does a teacher make? Apple pie, of course! Credit: NOAA Fisheries/Amanda Bradford 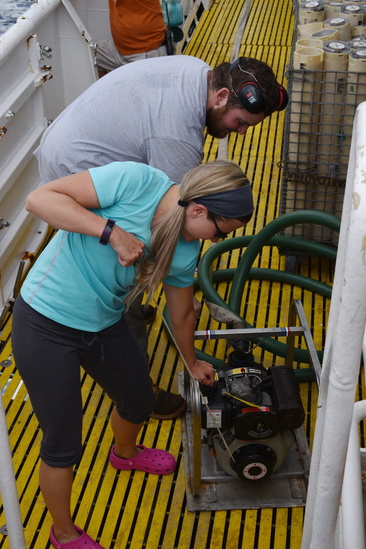 Starting the Sette’s dewatering pump is not easy, as Assistant Engineer Jerry Frasier can attest to, but Staci DeSchryver said, “I am going to get this.” And she did. Credit: NOAA Fisheries/Tim Holland

The Sette officers and crew seem to have a natural affinity for having a TAS on board and went out of their way to be open with and include Staci. What made that willingness to share even easier was the incredible enthusiasm and excitement Staci had for learning about the ongoing operations at all levels, from searching for cetaceans from the flying bridge, to learning about navigation on the bridge, to testing the ship’s emergency alarms and dewatering pump. Lead Acoustician Jennifer Keating noted, “I have never quite seen anybody take advantage of touring every part of the ship like Staci did.” She was interested in all parts of the HICEAS effort, not just the science, recognizing that it takes the work of every individual on the ship to result in the whale and dolphin observations that ultimately get most of the attention. This interest in the bigger picture improved morale on the ship because it brought people together.  When asked if having a TAS enhanced HICEAS Leg 1, the Sette’s Lead Fisherman Mills Dunlap answered, “Regarding having a TAS, yes; specifically Staci, double yes!” Commanding Officer CDR Stephanie Koes agreed, “Staci was our MVP on this trip because she was so involved with everything.”

Although she spent time learning about all aspects of ship operations, Staci was an integral part of our scientific team. She was a member of the unmanned aircraft system (UAS) team, serving as a visual observer and data recorder when the hexacopter was in flight and taking aerial photographs over cetacean groups. She also helped search daily for whales and dolphins from the flying bridge and was responsible nightly for deploying sonobuoys that detected and transmitted the sounds of nearby baleen whales. Staci’s energy and curiosity made scientific work that had become routine seem fun and interesting again. As a teacher, she knows that the ability to explain a topic or task increases one’s own understanding of it. Her interest and questions gave us a chance as scientists to become more familiar with our work and appreciate it in a different way. She also offered a new perspective on the results of our efforts that we sometimes take for granted. While we had 46 sightings of cetaceans during HICEAS Leg 1, we expected to see more given the particular area we surveyed. We occasionally expressed some disappointment about our low sighting rates, especially on a few long days when we did not see anything.  “Guys,” Staci reminded us, “I’ve seen more whales in the last few days than I have in my entire life.” Thank you, Staci, we needed that. 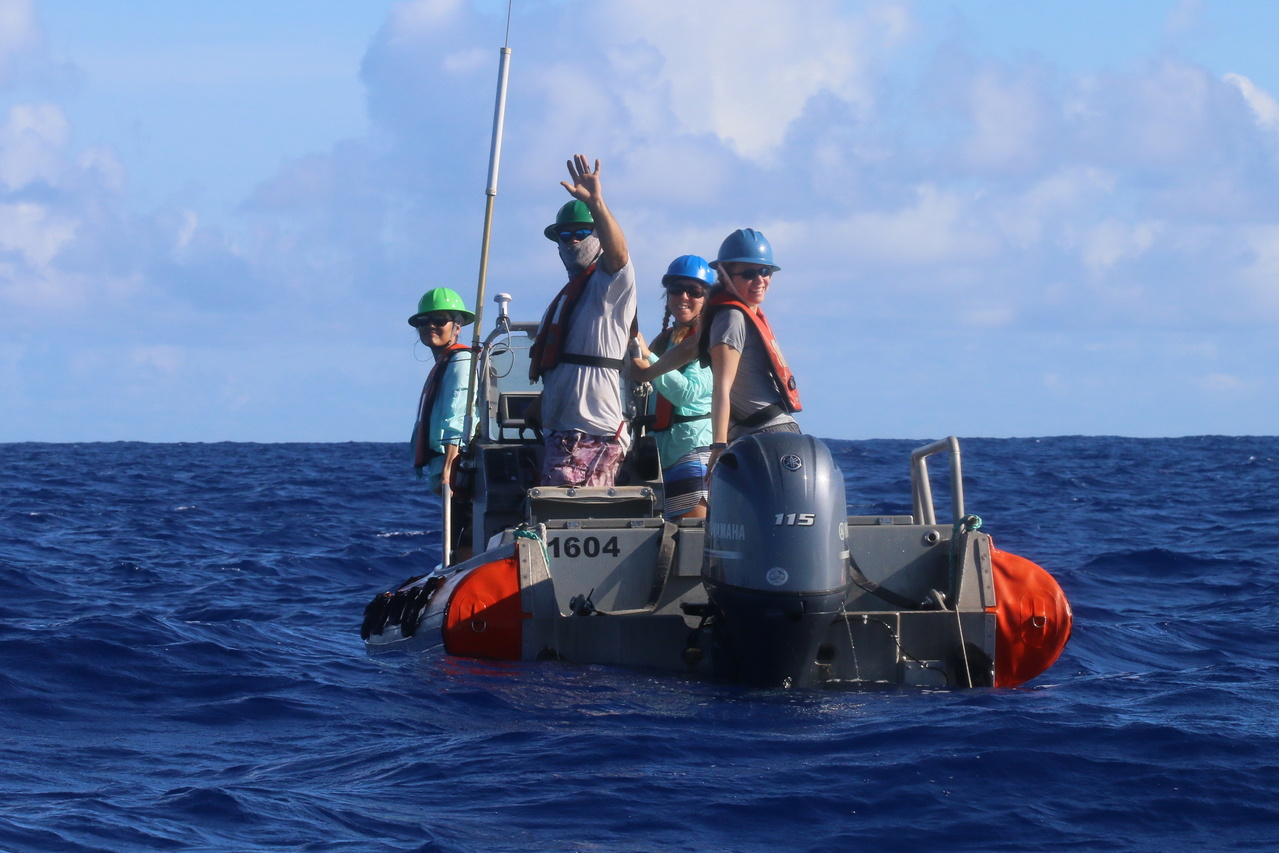 For Staci, the opportunity to be a TAS has offered unparalleled professional development and, to some degree, has kept her in her career. During her 14 years of teaching, she has craved opportunities for real-world experiences outside of the classroom. However, both times she sailed as a TAS, she reaffirmed her commitment to teaching because she was constantly thinking about her class. “This is why I’m here,” Staci stated, surrounded by ocean. “This is why I teach.” She looks forward to sharing with her class all that she learned during HICEAS, not just as specific lessons, but also as casual and funny stories that will trickle out over time. Staci recommends the NOAA TAS program to other teachers without hesitation. She advises teachers who are accepted in future field seasons to fully immerse themselves in the experience and not just report it. “You bring something unique to the experience. If you disconnect yourself from it, the experience gets lost in translation.” “And,” she adds, “if you like it, go back.” 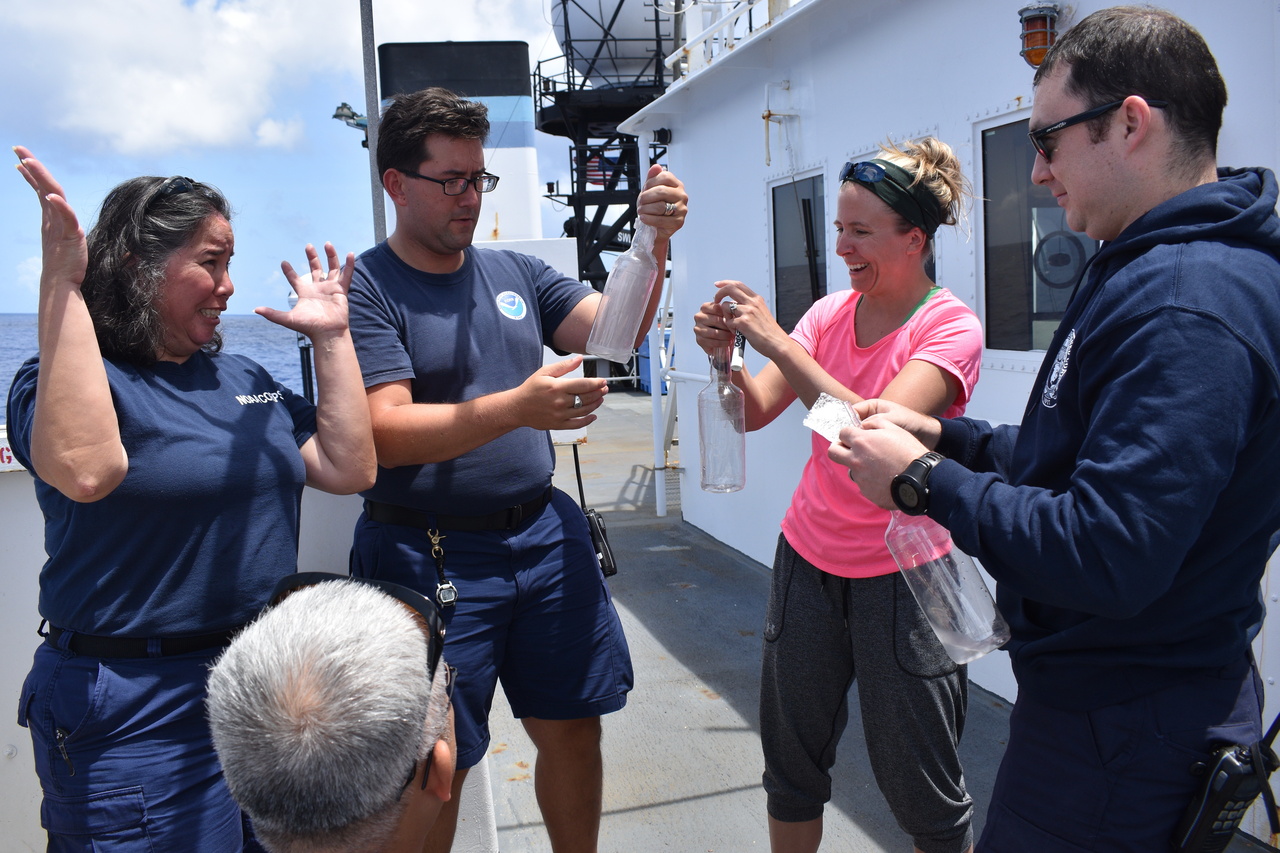 At the beginning and end of each year, Staci asks the students in her classes to draw a picture of what they think a scientist looks like. Each time she does this experiment, she gets almost exactly the same results. In the beginning of the year, the students draw someone in a lab coat with safety goggles mixing chemicals in a beaker. At the end of the year, they draw a regular person in casual clothes. This year, she won’t be surprised if some of her students arm their end-of-the-year scientist with a pair of binoculars aimed at whales in the distance. And that will be just fine with her.

Staci DeSchryver wrote a series of fantastic Teacher at Sea blog posts during her time on HICEAS–check them out here.

Previous: HICEAS Hilite: Killer Whales in the Tropics Next: Off to a Great Start: The First Leg of HICEAS is Complete