Off to a Great Start: The First Leg of HICEAS is Complete

The HICEAS project completed its first survey "leg", with a total of 7 survey legs aboard two NOAA Ships planned from June through December 2017. 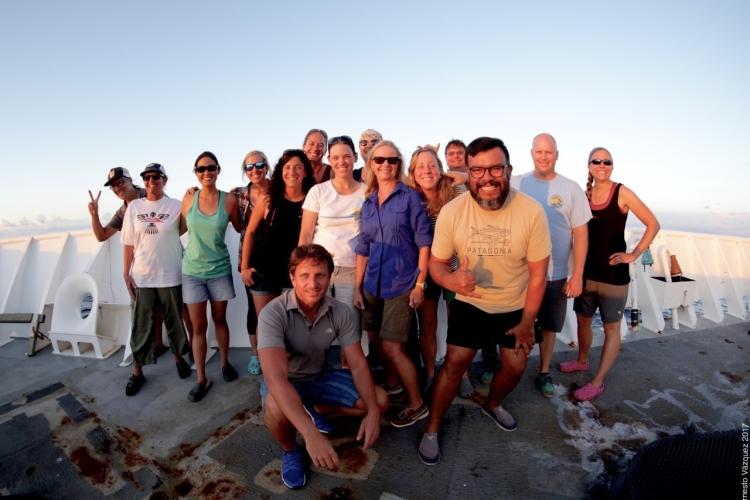 The Hawaiian Islands Cetacean and Ecosystem Assessment Survey (HICEAS) of 2017 is a huge effort. The study area covers over 1.8 million square nautical miles (the entire Hawaiian Exclusive Economic Zone). To comprehensively survey that expansive space, from Hawaiʻi Island in the east to Kure Atoll in the west, takes 2 NOAA ships–the Oscar Elton Sette and the Reuben Lasker–and 187 days at sea over a 5-month period; a total of 7 trips to sea between the 2 ships. This effort began July 6th on the Sette, and the first leg finished up August 2nd. A prolonged effort like HICEAS starts with lots of planning and is maintained by keeping goals front and center and having a little fun along the way. Leg 1 of HICEAS felt a bit like the end for a few of us–so many months of planning and we’re finally at sea–this is the reward. But really, leg 1 was just the beginning.

In many ways, the prospect of spending several months on a ship was a bit daunting. As we set sail, the excited, and perhaps nervous, energy was poured into ensuring all the gear and software was working as expected, that the early-survey electronic gremlins were vanquished, and that all of people that make up this effort, from the scientists to the ship’s crew and officers, were working as a team. The early HICEAS jitters were quickly allayed as the data began to stream in, and the natural comraderie of those that have sailed before and those that were new to this adventure. This process was facilitated with the aid of several dozen cans of fizzy water–the ever-present thirst quencher and morale-boosting libation of the HICEAS science team. By the end of the leg, everything was running like a well-oiled machine, ready for the adventure to resume after a short respite on land. 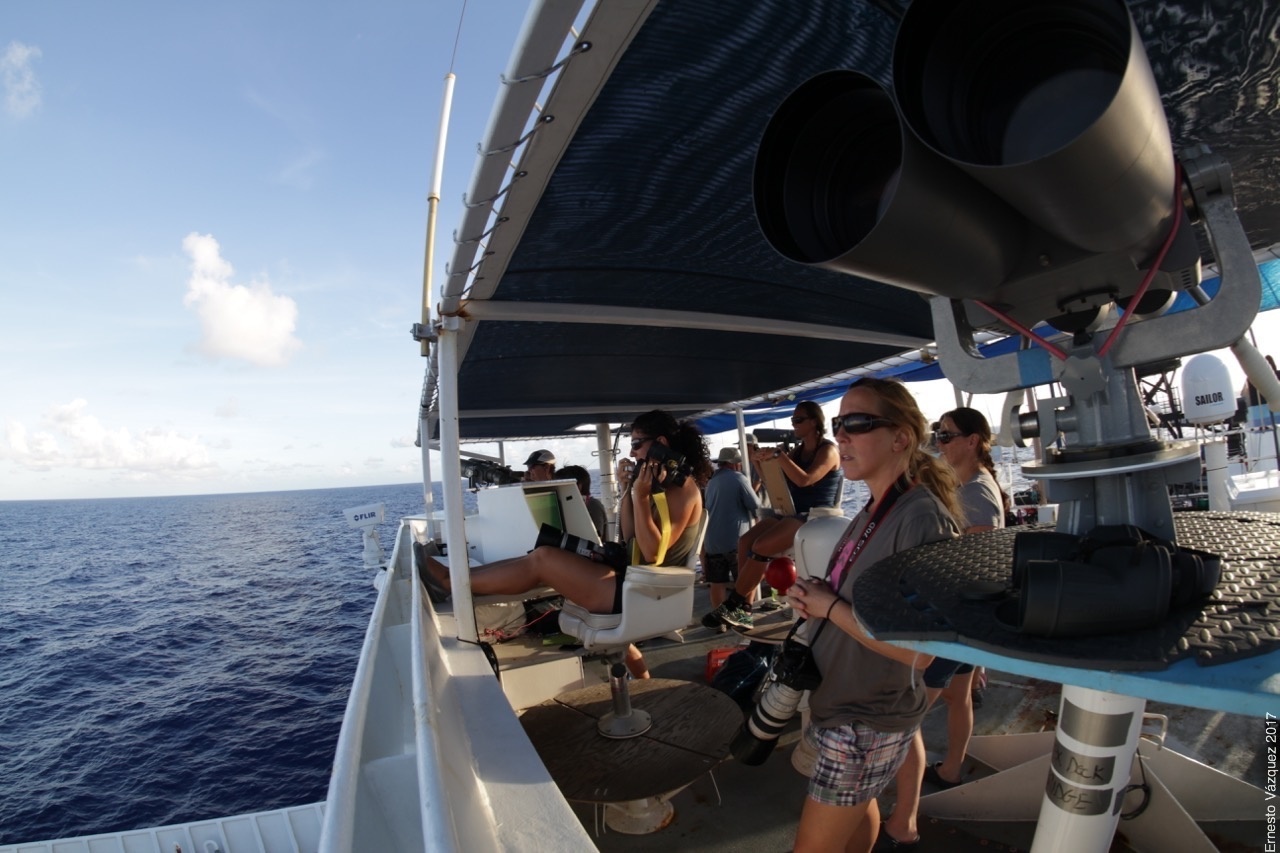 It’s all hands on deck while the visual survey team counts sperm whales. Sperm whale counts continue for 90 minutes to ensure that all animals are counted over the course of the prolonged deep dives. Credit: NOAA Fisheries/Ernesto Vásquez

A normal day during HICEAS starts before dawn with a CTD (Conductivity-Temperature-Depth) Rosette lowered to 1000 meters depth to measure salinities and temperatures of the ocean in the survey area. Before sunrise, the acoustics team deploys the towed hydrophone array and then, just after sunrise, when there’s enough light to reliably sight groups in the distance, the mammal and seabird visual survey teams begin their effort as we transit along one of many tracklines in our survey design. Throughout the day, as cetacean groups are sighted or heard (using underwater acoustic microphones, or hydrophones), the teams work to identify species, estimate the number of animals in the group, and when conditions are right and the animals allow, collect photographs and tissue samples to support more detailed analyses of population distribution and structure. When sunset comes, the visual and acoustic teams end their searches, and while the onboard Survey Technician casts another CTD, the teams check and summarize the day’s data, process and archive the photos, clean and prep the sampling gear, and prepare to start again the next day. For the acoustics team, the evening CTD just means a shift in operations. As part of the team works to check and archive the day’s data, the other part deploys sonobuoys to listen for baleen whales during the CTD cast. Once the CTD is back on deck, the acoustics team redeploys the towed hydrophone array to listen for chatty cetaceans overnight. At night, many whales and dolphins increase their vocalizations as they forage on a cornucopia of plankton rising from the depths, or on larger fish and cephalopods that follow. While the team sleeps, our gear continues collecting data, never wasting a moment of this effort.

The Main Hawaiian Islands (MHI) is a focal region of the 2017 effort, and where we kicked off our HICEAS adventure. The MHI special focus area includes a higher density of effort in our survey design, carried out both along ‘standard’ tracklines–those that extend from the ESE to WNW reaches of the Hawaiian Archipelago–and along random ‘fine-scale’ tracklines that begin or end where we deploy or retrieve Drafting Acoustic Spar Buoy Recorders (DASBRs). The MHI area is home to several island-associated populations of cetaceans, as well as several human activities that may affect those populations. The additional visual and acoustic survey effort in this region is designed to better assess the distribution and density of those island-associated populations and examine the impacts of human activities in their habitat. HICEAS is funded by a multi-agency coalition of partners with interest in ensuring the sustainability of Hawaiʻi’s cetacean populations, including NOAA Fisheries (that’s us!), the agency responsible for assessing Hawaiʻi’s cetaceans under the Marine Mammal Protection Act and Endangered Species Act, and the U.S. Navy and the Bureau of Ocean Energy Management (BOEM), the agencies responsible for evaluating whether and to what extent the activities they conduct or regulate might impact Hawaiʻi’s cetacean populations.  The multi-agency partnership makes an effort like HICEAS possible, and the joint interest of these agencies in the MHI has spawned the MHI focus area for 2017. 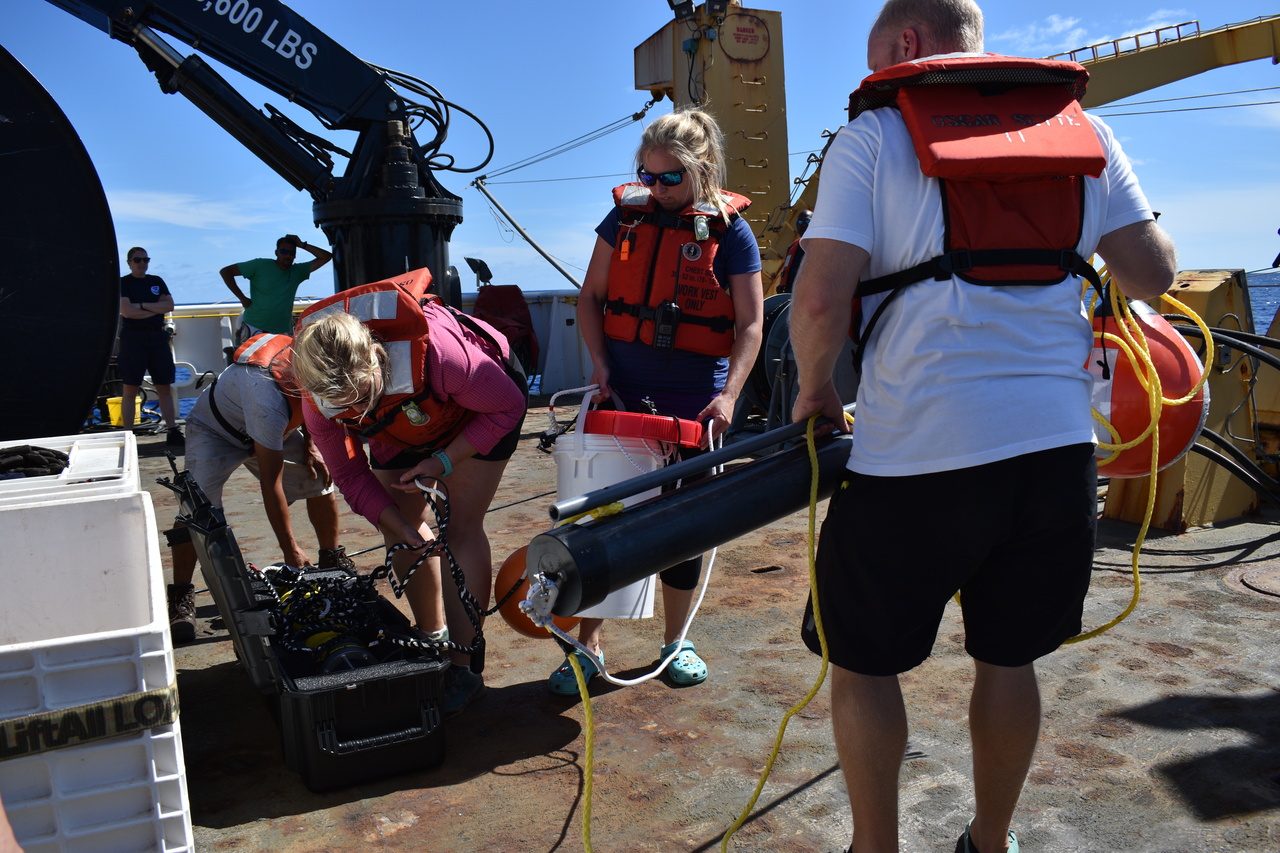 The acoustics team gets ready to deploy a DASBR south of Lanai. Credit: NOAA Fisheries/Staci DeSchryver

The early efforts of the first leg aboard the Sette included several special passive acoustic projects in the MHI focus area. Over the first 12 days, we deployed 8 DASBRs in both leeward and windward waters of the MHI focus area. The DASBRs record ocean sounds, including those produced by cetaceans, for four weeks, providing a rich dataset that can be used to evaluate cetacean distribution and density at a finer scale of time and space than the ship-based portion of the survey could provide alone. The DASBRs are also uniquely suited to locate beaked whales, a clade of deep-diving cetaceans that are often difficult to see in typical Hawaiʻi weather, but also potentially vulnerable to anthropogenic sound. We also recovered and redeployed a High-Frequency Acoustic Recording Package (HARP) off Kona, the location of a long-term acoustic monitoring site that is part of the Pacific Islands Passive Acoustic Network. Redeployment will allow monitoring through the fall, continuing a nearly 11-year record at this location, which has proved invaluable in examining seasonal and inter-annual patterns in cetacean occurrence in this unique Hawaiʻi region. Finally, the Sette crew expertly recovered and redeployed an Ocean Noise Reference Station north of Oʻahu, bringing home two years of calibrated low-frequency ambient noise and cetacean occurrence data that form the beginning of the Hawaiʻi dataset for NOAA’s long-term commitment to monitor and measure ocean noise throughout US waters. The newly-deployed hydrophone will record for another two years. 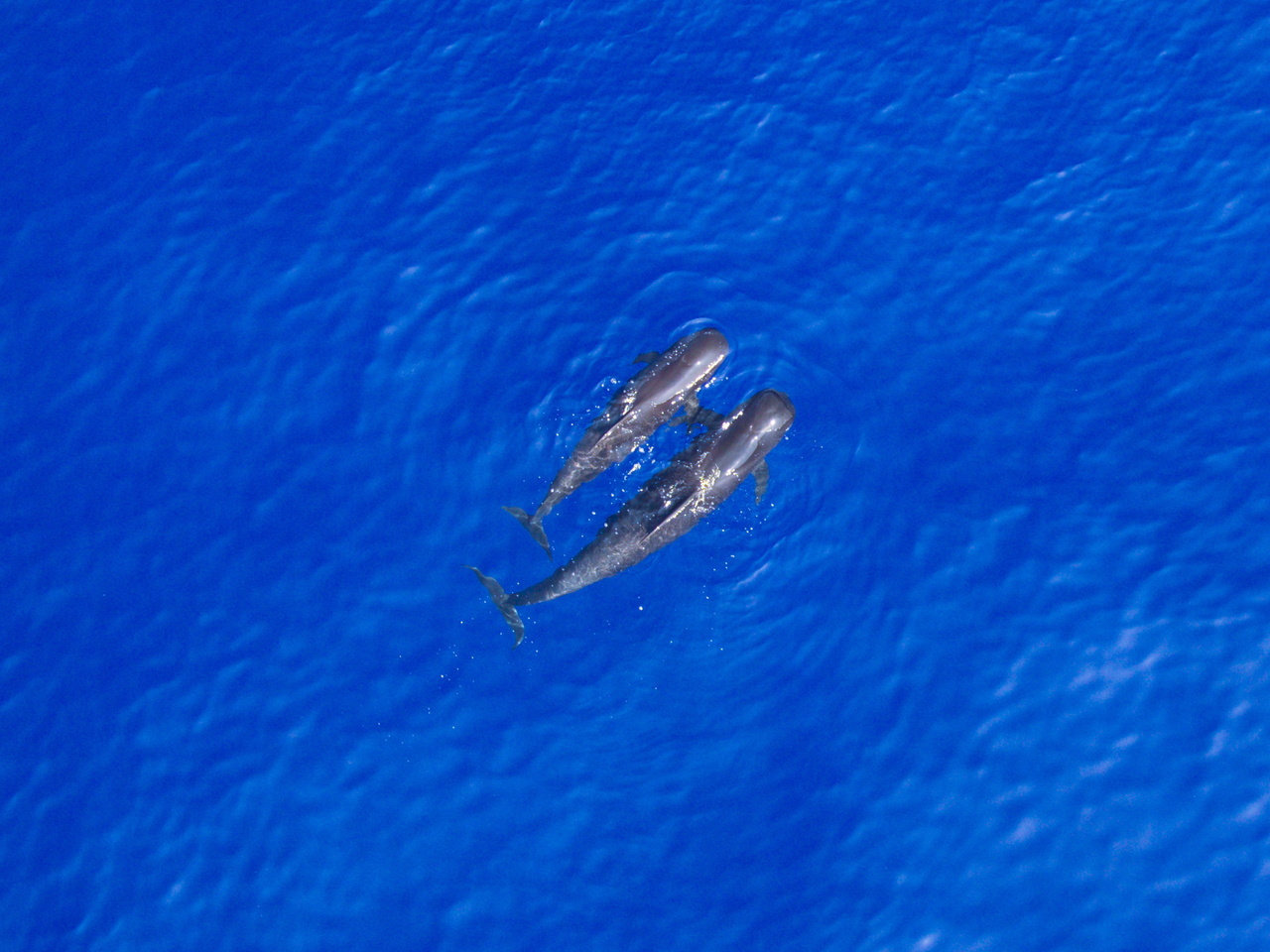 The early portion of the mission also included two days of shake-down flights in predictably calm waters off Kona for our newly-minted hexacopter pilots. The PIFSC Cetacean Research Program has recently invested in the hexacopter as a powerful platform to collect aerial imagery of cetaceans. The images can be used to assess group composition (number of adults, juveniles, and moms with calves) for insights into population demographics, and to measure individual size and shape as a metric of animal health. Our hexacopter team made 14 successful flights, including a number of calibration and practice flights, and several over groups of spinner dolphins and short-finned pilot whales. With these flights, the pilots honed their ability to fly over a group from a distance, evaluate image quality from a small monitor in the boat, and keep up with moving groups while keeping track of parts of the group that have already been photographed. Unfortunately, after leaving Kona, encounters with our target species were never in suitable weather conditions for flights.  We hope for more opportunities to collect images of pilot whales, sperm whales, false killer whales, and Bryde’s whales throughout HICEAS. 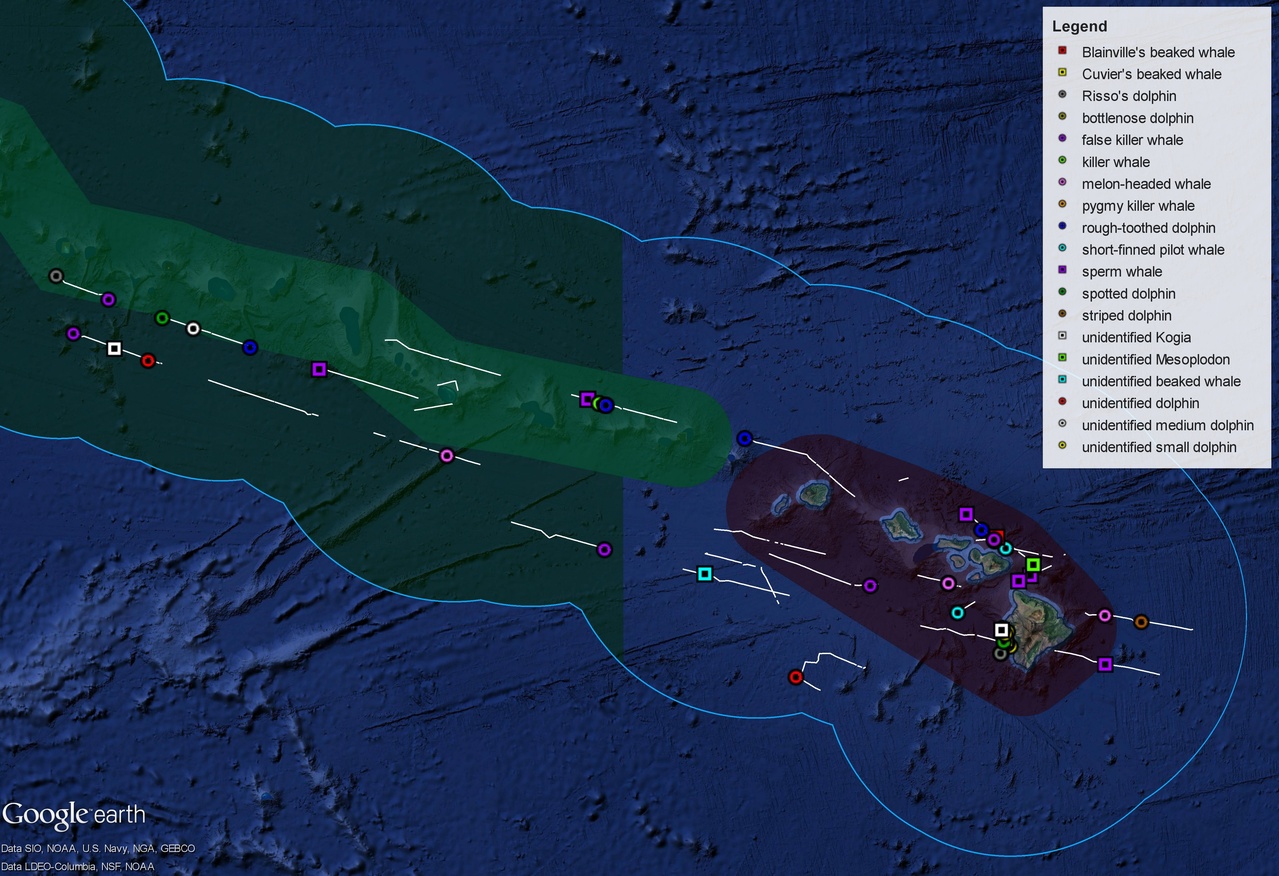 HICEAS is designed to survey the entire Hawaii EEZ (light blue line), including the area of the original Papahānaumokuākea Marine National Monument (light green area) and the recent Monument expansion (dark green area) over 187 days. The red shading is a focus area around the main Hawaiian Islands. Leg 1 aboard the Sette included daytime effort from east of Hawai’i Island to south of Lisianski (white line) and included 46 cetacean sightings (see legend). The remainder of the HICEAS study area will be surveyed over the next six legs. Credit: NOAA Fisheries 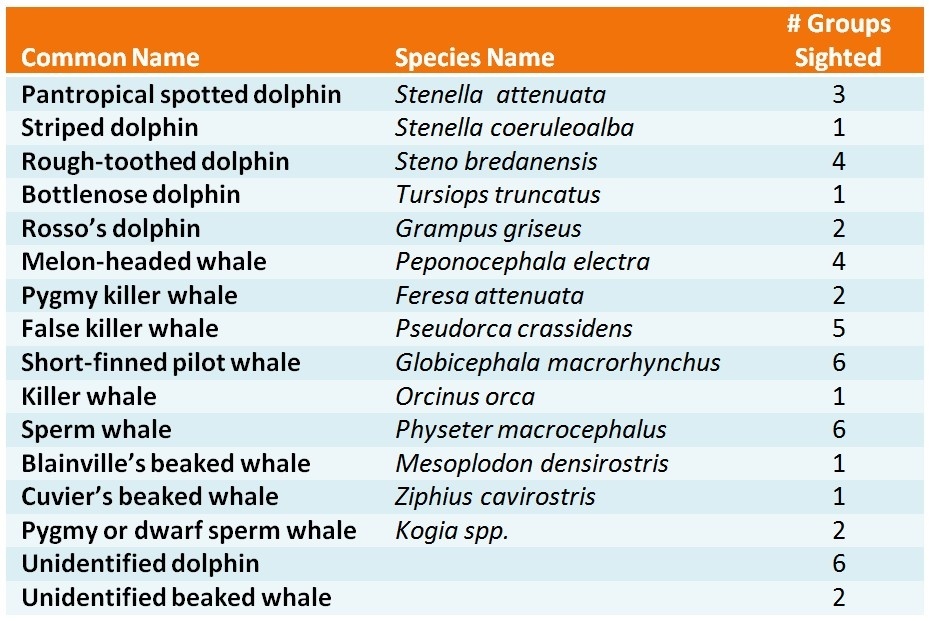 Cetacean sightings during the first leg of HICEAS aboard the Sette. Credit: NOAA Fisheries

All told, during the first 28 days at sea aboard the Sette, we visually and acoustically surveyed 2,330 nmi of daytime trackline extending from east of Hawaiʻi Island to south of Lisianski in the northwestern Hawaiian Islands. Our visual team sighted 46 groups of cetaceans, while the acoustics team detected 129 vocal groups. Our seabird observers tallied 35 species during the effort, including 148 flocks of feeding seabirds, an important indicator of ocean productivity and ecosystem health. We recovered 3 DASBRs, and (sigh) spent a few days chasing DASBR ghosts–those that got away when their Iridium transmitters stopped telling us where they’d gone [this was likely due to unintended water leaks into the spar buoy (we’ve vanquished that gremlin, and still hope a charitable boater may find our wayward DASBRs and give us a call)]. We lent a hand to our monk seal and marine turtle colleagues with a brief stop at French Frigate Shoals to deliver fuel and supplies for another several weeks of their seal and turtle research on this remote atoll. We were supported by (in our opinion) the most capable crew and supportive command in the NOAA fleet. Apart from the Sette’s usual excellence, we were especially lucky to be supported by LCDR Emily Rose (aka Master Survey Tech) and Electronics Technician Patrick Trevethan who stepped in and kept our CTD operations running smoothly when our original Survey Tech had to leave the ship early. We were also fortunate on leg 1 to have sailed with an excellent NOAA Teacher at Sea, Staci Deschryver, who chronicled her adventures on HICEAS in a fantastic blog series. 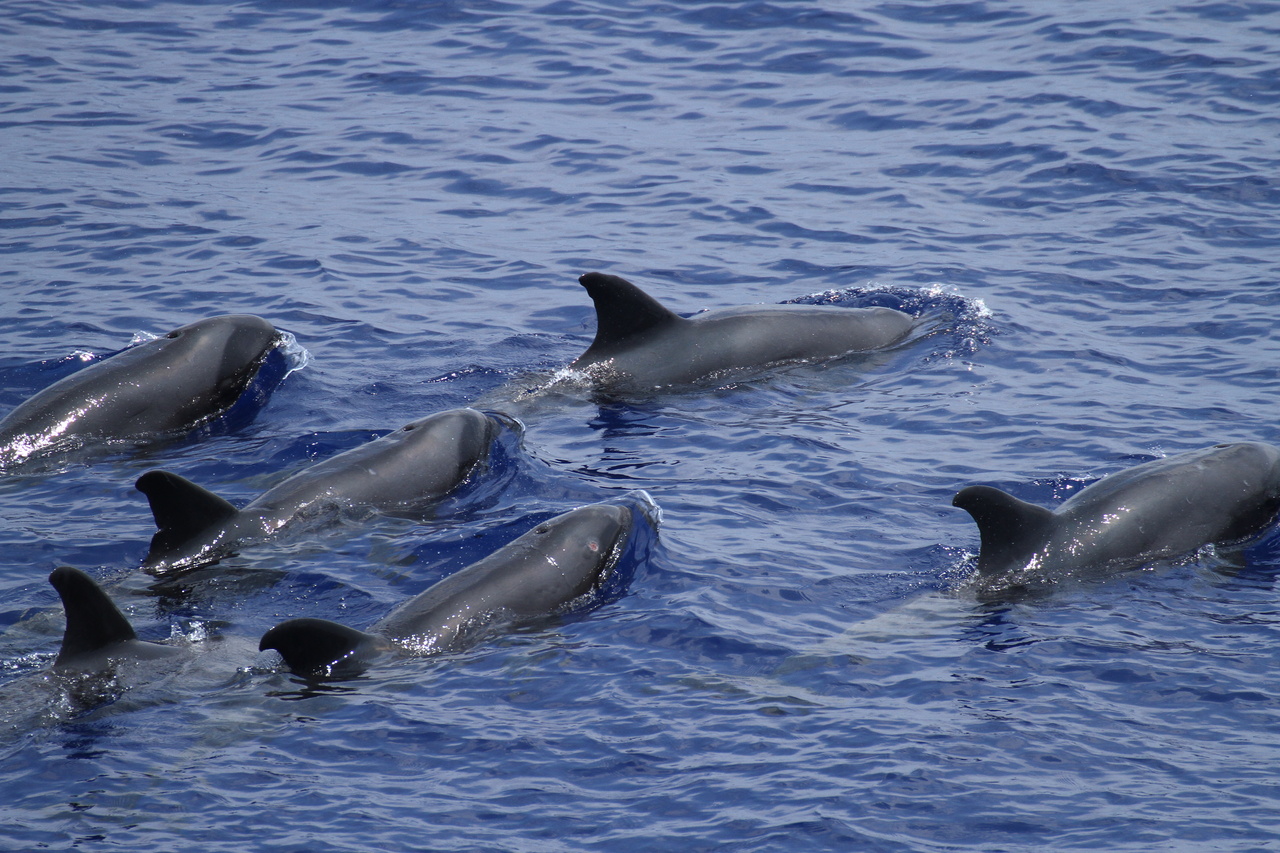 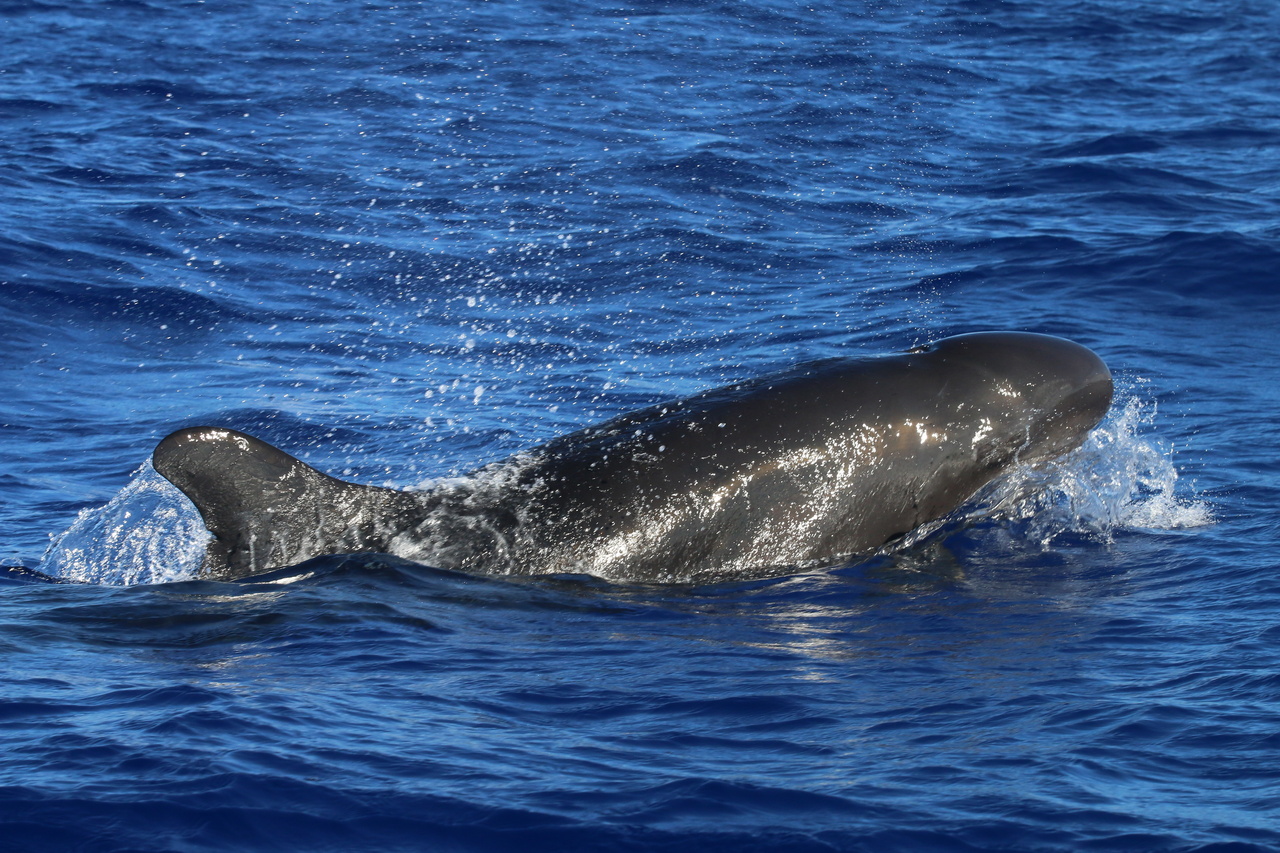 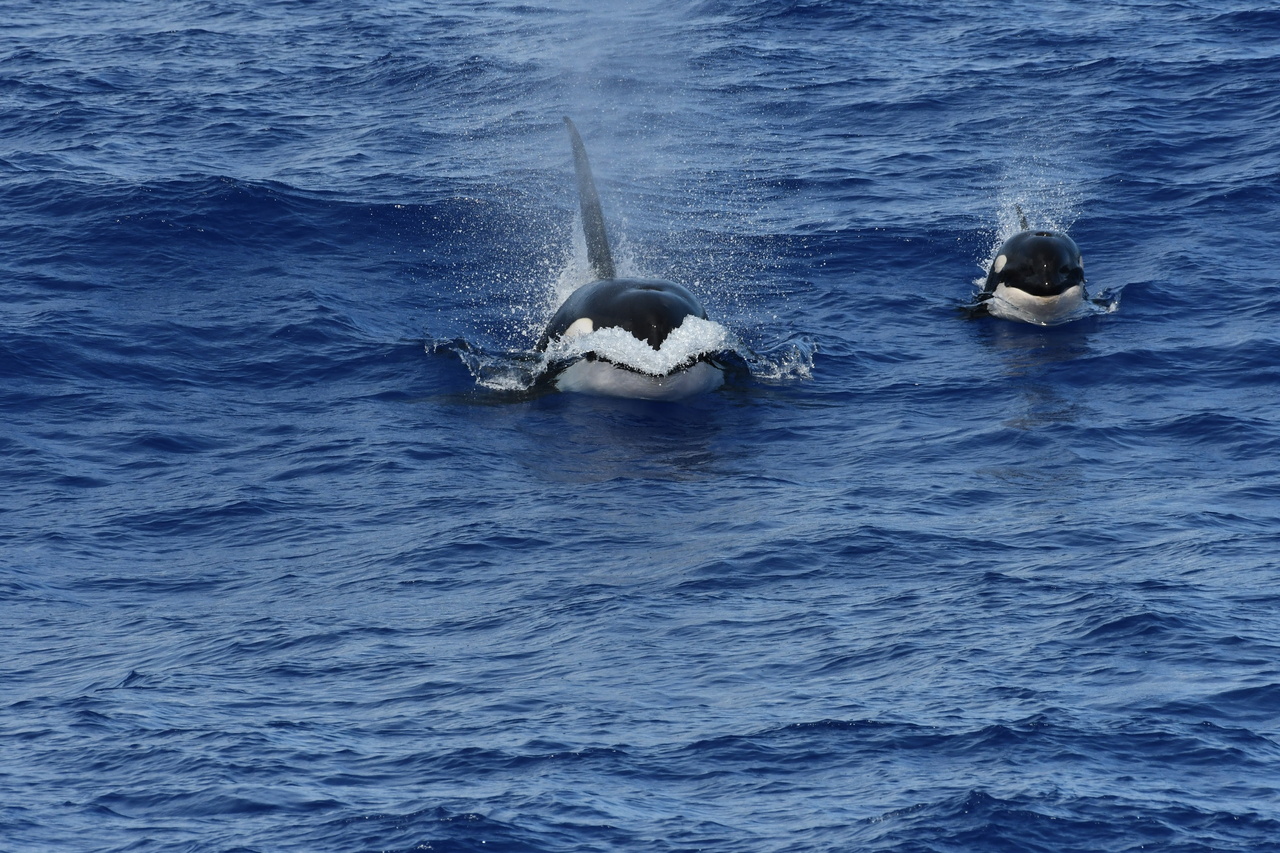 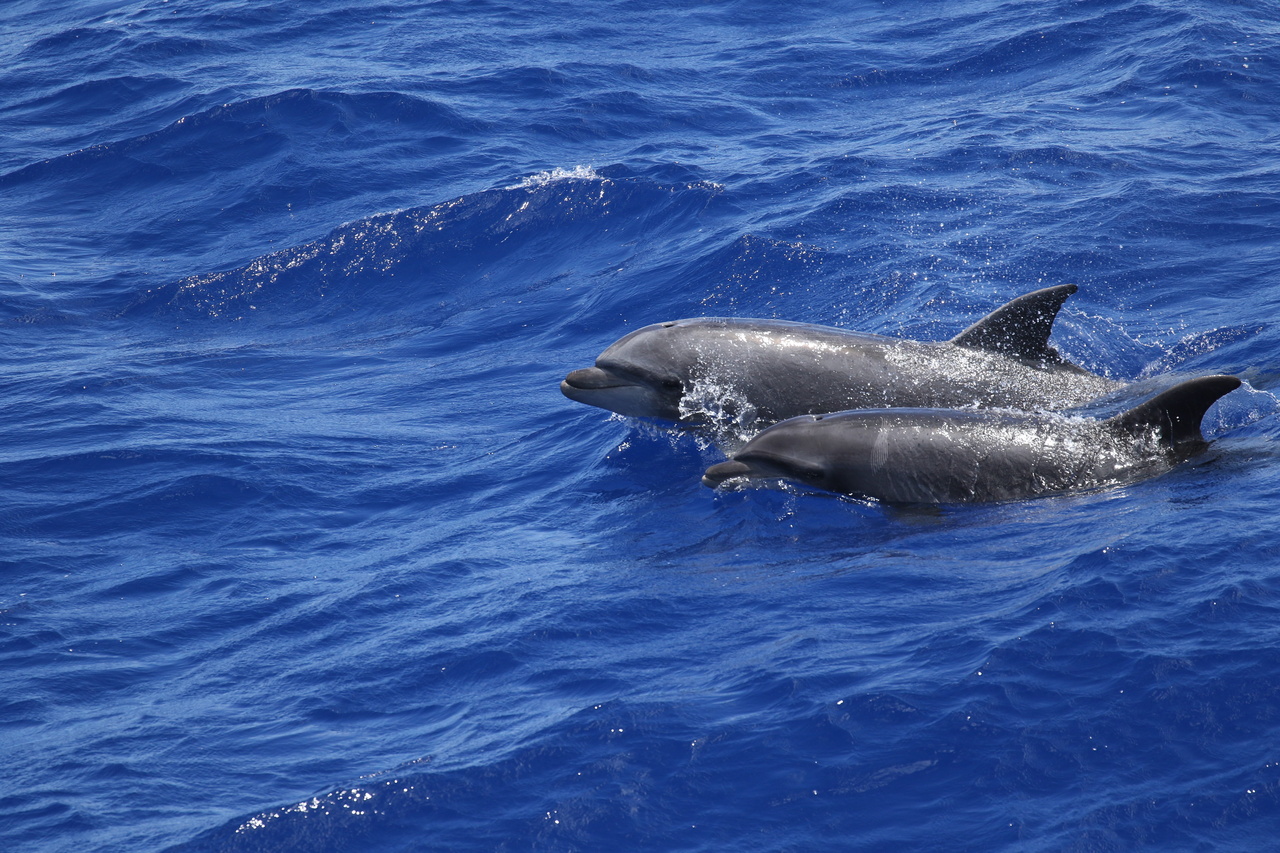 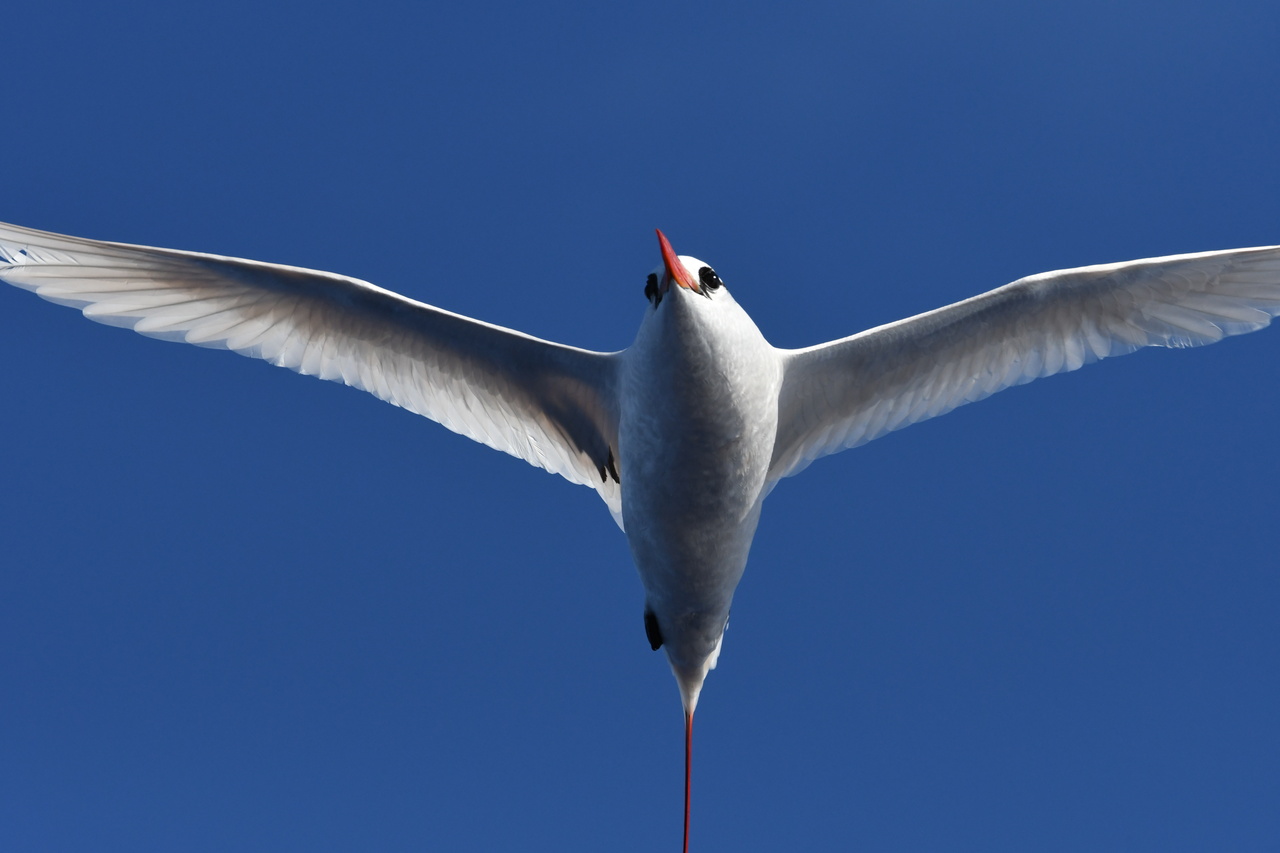 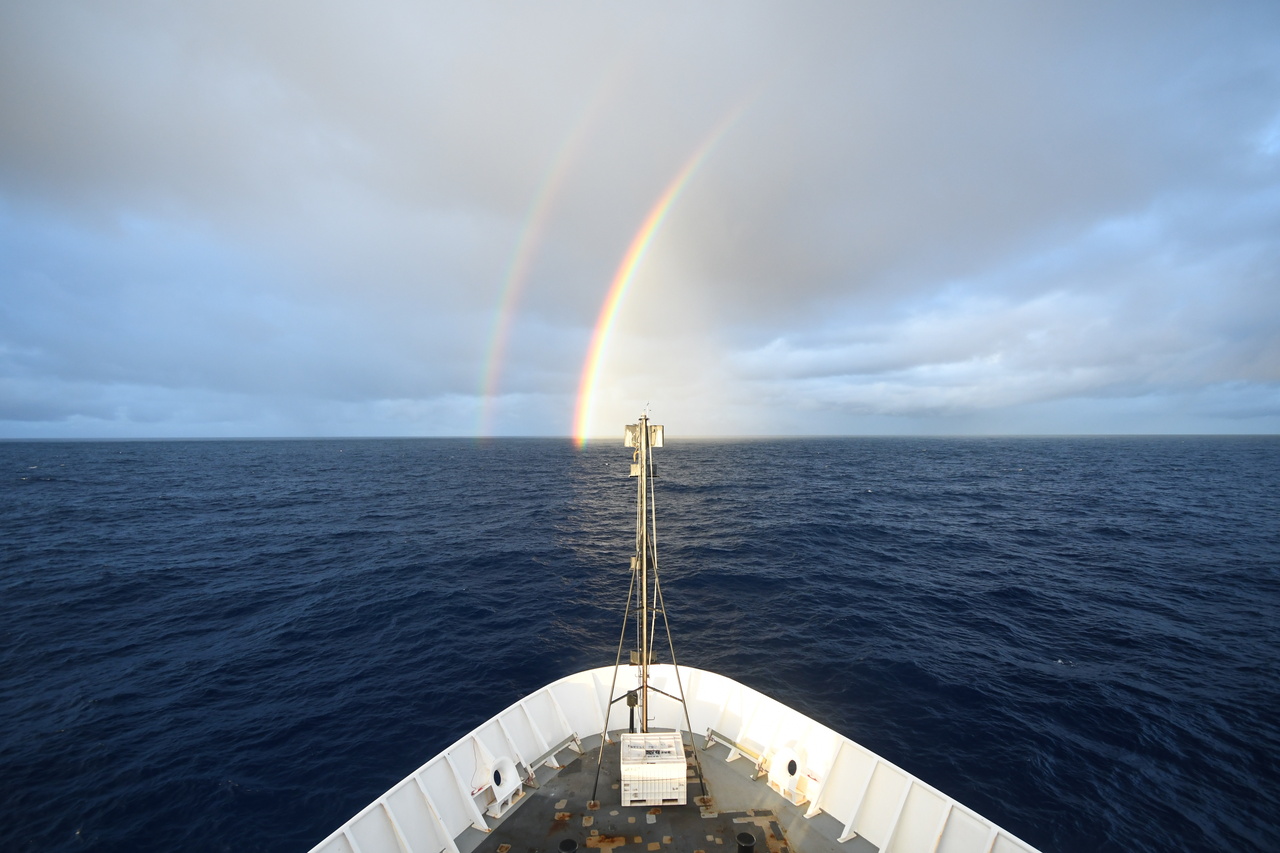 Sometimes there’s more to look at than animals. After dodging rain squalls, the visual team is rewarded with a beautiful rainbow. Credit: NOAA Fisheries/Adam Ü

The HICEAS adventure resumed August 8 on the Sette for leg 2 and was enhanced on August 17, when the Lasker began its journey west to join the HICEAS effort. Both ships will continue surveying until September 5, when they will take a short break before departing again. Stay tuned to the Story Map for updates from both ships!

Previous: How a Land-locked Teacher gets an A+ and Sea-Salty Memories for Life Next: HICEAS Hilite: Diving into the Secret Lives of Short-Finned Pilot Whales