Short-finned pilot whales in Hawaiian waters are the Naisa type, which is distinguisable by its square head. 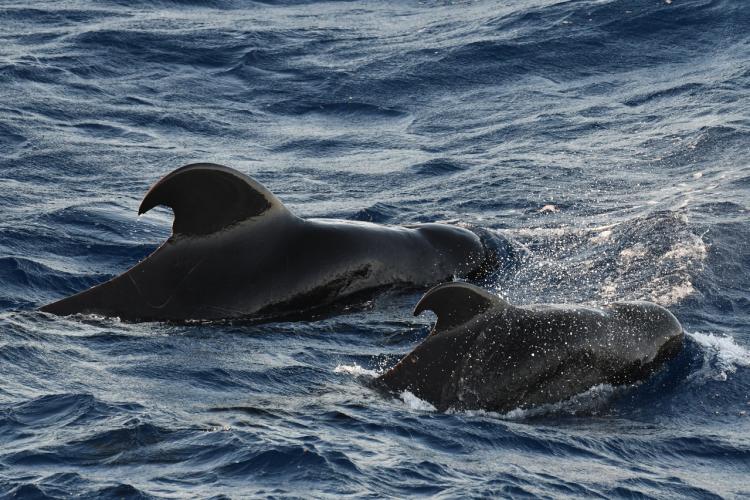 Short-finned pilot whales spend most of their lives in pairs, or dyads, and in close companionship with a small group of other animals. Credit: NOAA Fisheries/Adam Ü (Permit #20311)

It didn’t take many days into the ongoing Hawaiian Islands Cetacean and Ecosystem Assessment Survey (HICEAS) to see short-finned pilot whales (Globicephala macrorhynchus). They came, during our second sighting of the cruise, as they so often do–meandering slowly through, seemingly unbothered by the flurry of melon-headed whales that were darting around them. You would never guess they are called the “cheetahs of the sea.”

Once underwater, though, they sprint down to the darkness of the deep ocean, up to 800 meters, to hunt for squid and other deep-water prey. Short-finned pilot whales hunt and live their lives in stable social groups of 15-30 animals. When they hunt, half of the group will dive while the other half stays at the surface. The whales will make social calls while they’re separated, so they can find each other when they return to the surface.

Behaviors like these have made scientists take a closer look at how important sociality is to short-finned pilot whales. Scientists have found that animals in Hawai‘i spend most of their lives in small groups of close relatives. Those small groups are very selective about what other groups they will associate with, and where they will spend their time. This selective behavior has led to three separate communities in the main Hawaiian Islands–a western community around O‘ahu and Kaua‘i, a central community extending from O‘ahu to Maui, and an eastern community around Hawai‘i Island.

While we know a lot about the eastern and western communities–which families live there, who they associate with, when they dive and hunt–we know very little about the central community. So we were very excited to run into a group of short-finned pilot whales off Maui on August 1, 2017, at the end of HICEAS leg 1 aboard the NOAA Ship Oscar Elton Sette. Using photos we collected during that sighting, we’ll be able to determine if the group we encountered is from the central community, and then use this sighting to increase what we know about that community. 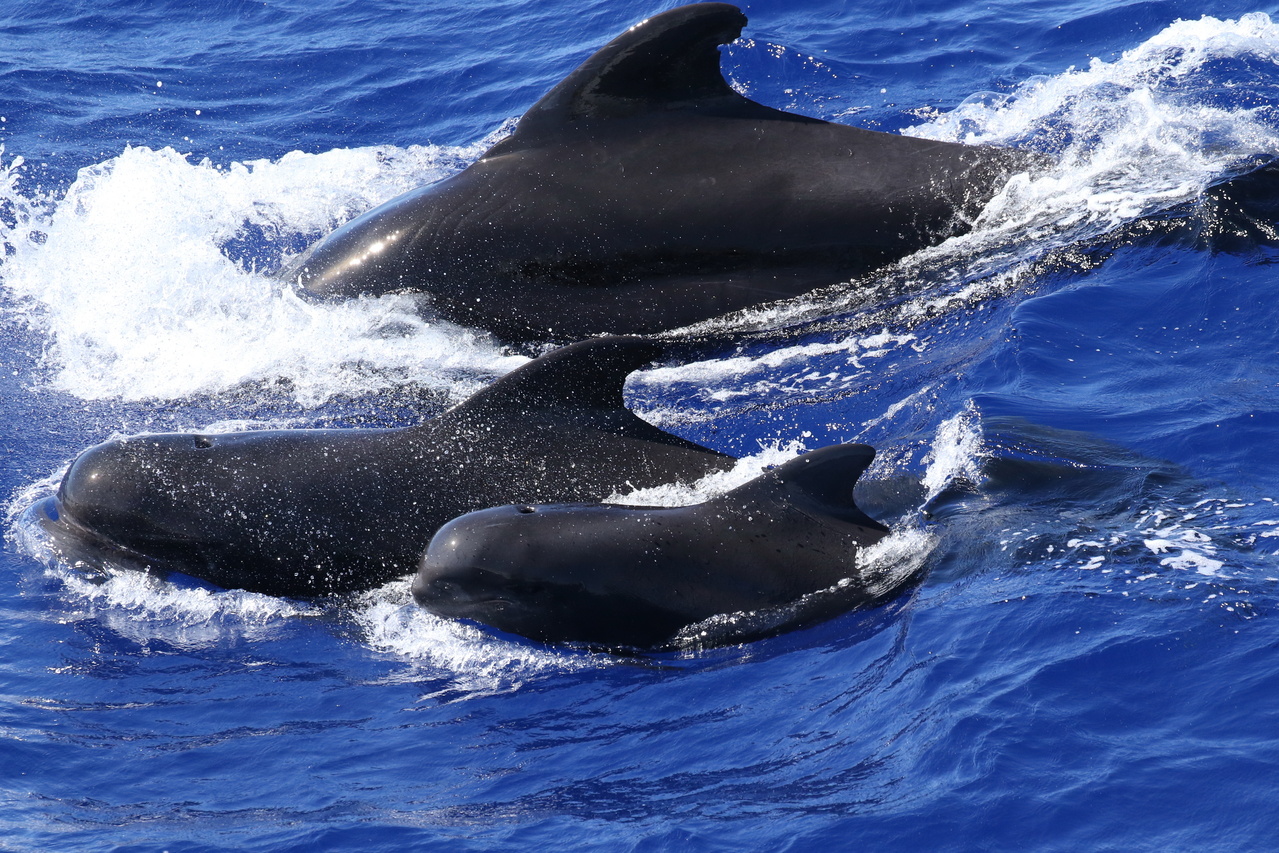 Little is known about the community of short-finned pilot whales that lives around Maui, but by comparing the dorsal fins from animals we encountered on August 1, 2017, to a photo ID catalog of animals around the Hawaiian Islands, we can learn more about where these animals spend their time and with whom they choose to associate. Credit: NOAA Fisheries/Amy Van Cise (Permit #20311)

Short-finned pilot whales are found throughout the tropical and temperate oceans of the world, and for centuries, scientists have thought that all short-finned pilot whales were a single species. But in the last couple of decades, a new picture is beginning to develop: scientists have described two different body types, and then shown that animals with different bodies also have different distributions, vocalizations, and DNA codes. They have called these two types “Shiho” (Shee – hoe) and “Naisa” (Nye – sa) type short-finned pilot whales, and think that they might be separate subspecies or even species. The Naisa type lives in the western Pacific, including the Hawaiian Islands, and is easily distinguishable by its square melon (or head). 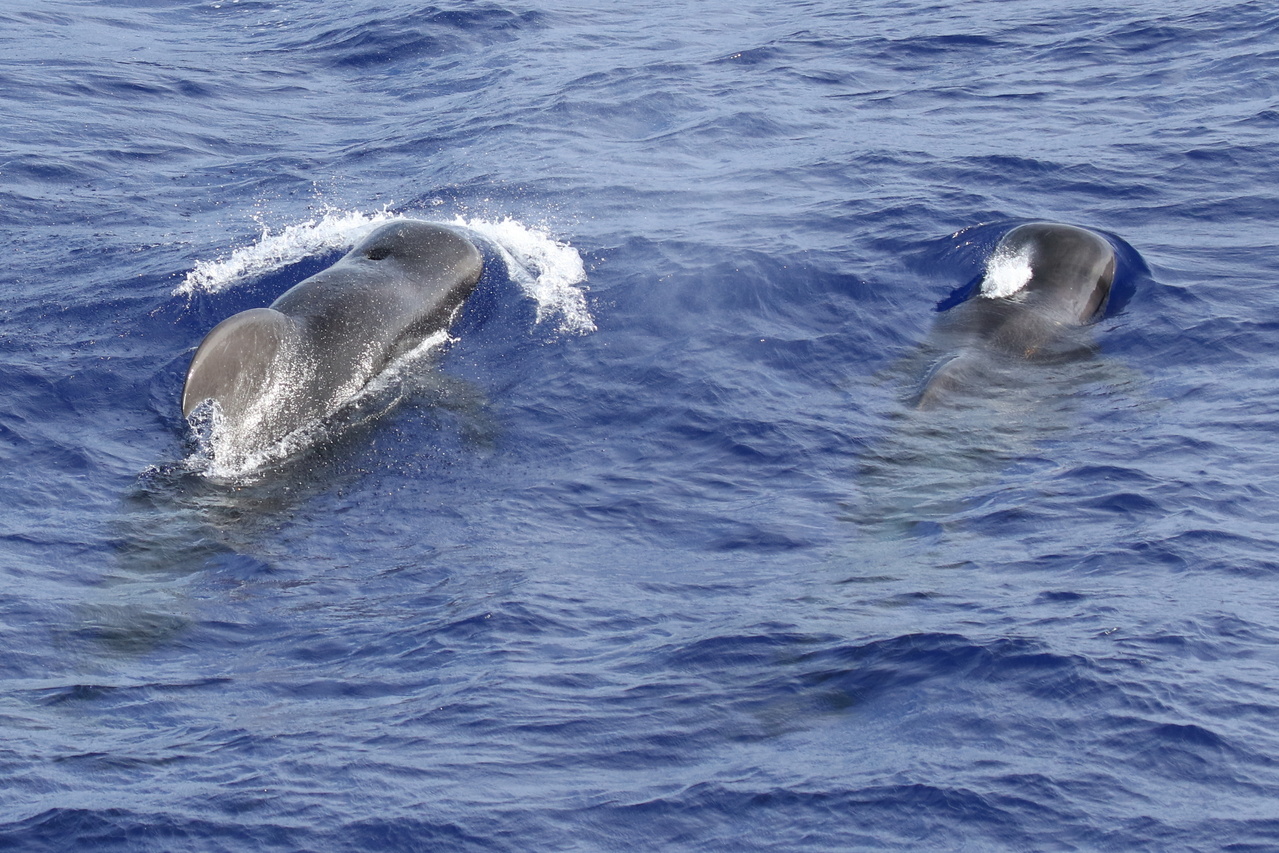 The square heads above are a dead giveaway for Naisa type short-finned pilot whales, but you don’t have to worry about telling them apart from other types in Hawai‘i, because we only see the Naisa type. Credit: NOAA Fisheries/Amy Van Cise (Permit #20311)

On August 20, 2017, during HICEAS leg 2 on the Sette, we finally caught sight of a group of short-finned pilot whales in the far northwest reaches of the Monument, and it was nothing like what we had seen in the main Hawaiian Islands–these guys were fast. They practically sliced through the water, coming up for only a few breaths before diving again. We launched a small boat from the ship to get better photos and biopsy samples from this group, since we knew it might be one of the few times we ever see them in this remote area. But between their speed, the 6-foot waves, and the impending sunset, we were only able to get a few photos before the whales swam away into the night. 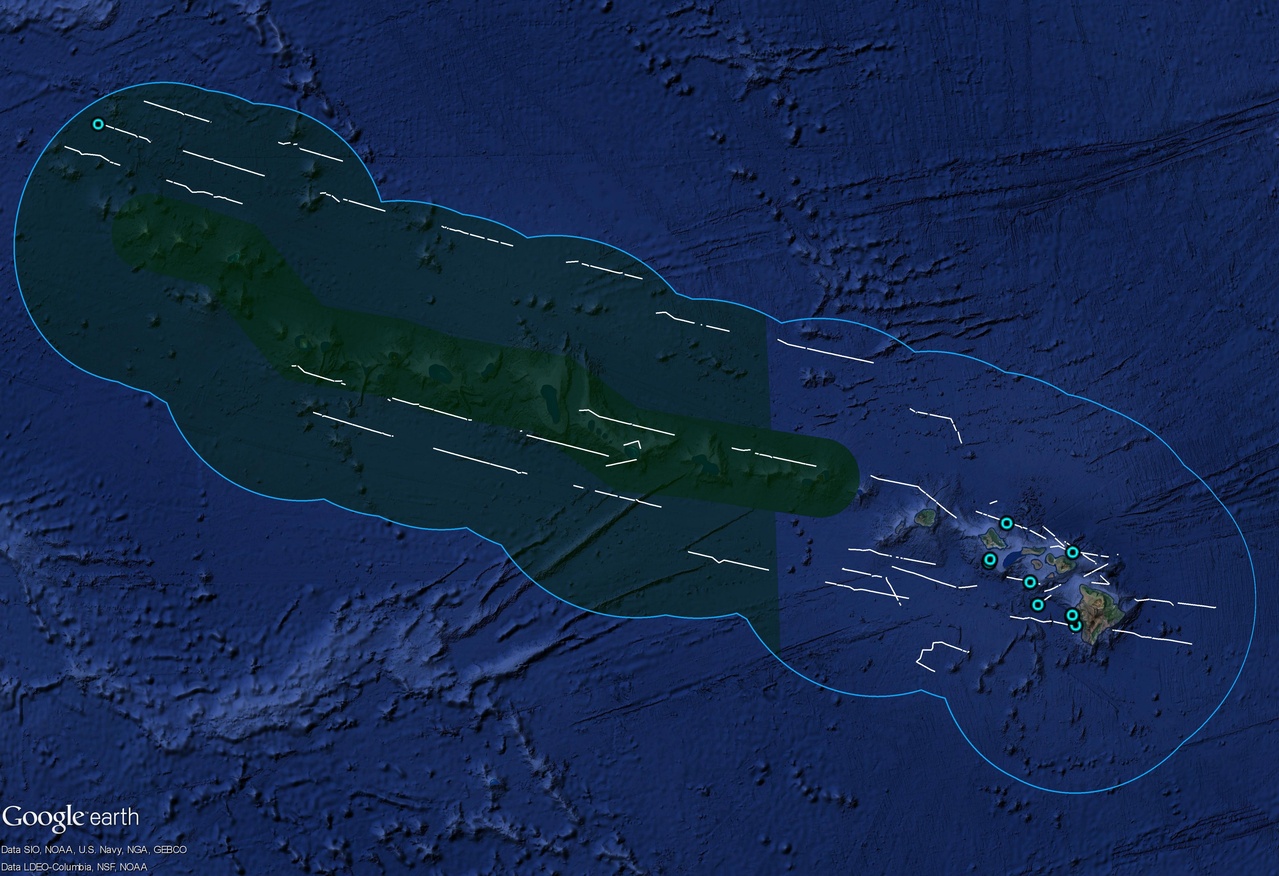 This map of the Hawaiian Islands shows all of the HICEAS survey effort (white lines) through August 22, 2017, with pilot whale sightings shown as blue dots. Most sightings of pilot whales have been close to the main Hawaiian Islands; so far we’ve only found one group of pilot whales far from land. The area shaded in green is the Papahānaumokuākea Marine National Monument, with the expanded portion of the Monument shown with slightly lighter shading. Credit: NOAA Fisheries

One of the greatest challenges of studying marine mammals is having the patience and perseverance to collect data. Each sighting of a species or population gives us just a little more information about their behavior, abundance, or ecology, but some species can take days, weeks, or even months to find. We still have so much to learn about short-finned pilot whales in Hawai‘i–so we will keep looking!

For updates about short-finned pilot whales and all the other species we are seeing, keep following us on the Story Map!

Previous: Off to a Great Start: The First Leg of HICEAS is Complete Next: Making Science Happen: The Officers and Crew of the Oscar Elton Sette