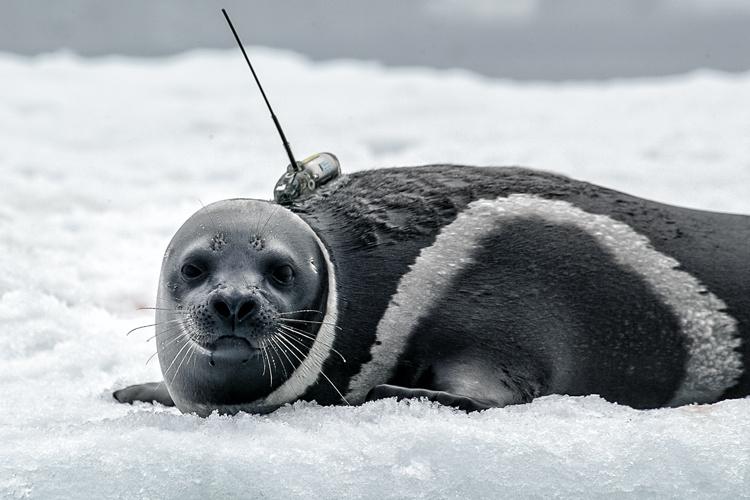 The ship left Kodiak, Alaska on 2 April 2016 and arrived at the ice edge on 6 April. For the past 5 days we have been navigating the marginal ice zone and working our way west. We have seen ribbon, spotted, and bearded seals from the ship and have explored the habitat further from our small, inflatable boats. Weather the past few days has been sustained winds at 25+ knots, temperatures in the mid 20s (F) and blowing snow.

Strong winds and sub-optimal ice conditions have often precluded us from launching our capture boats. Weather conditions improved, and we made our first capture.

Locating a triad on the ice, we launched all four of our small inflatable boats and slowly approached the floe, attempting to surround the triad. At the last second, the drivers sped towards the floe allowing the other researchers to jump out onto the ice and capture all three seals using hand-held landing nets.

We estimated that the pup was only about 2 days old. To ensure we did not break the maternal bond we quickly released the mother and her pup. We knew we were successful because the pup was later observed nursing. We moved the male to another ice floe and sedated him before performing our standard work up.

We instrumented our second seal, a sub-adult male ribbon seal.

The tags on the two instrumented seals are already providing useful information.

As the younger ice continues to dissipate throughout April, the older ice of the marginal ice zone preferred by ice-associated seals will become more accessible allowing us to capture, sample and tag more seals.