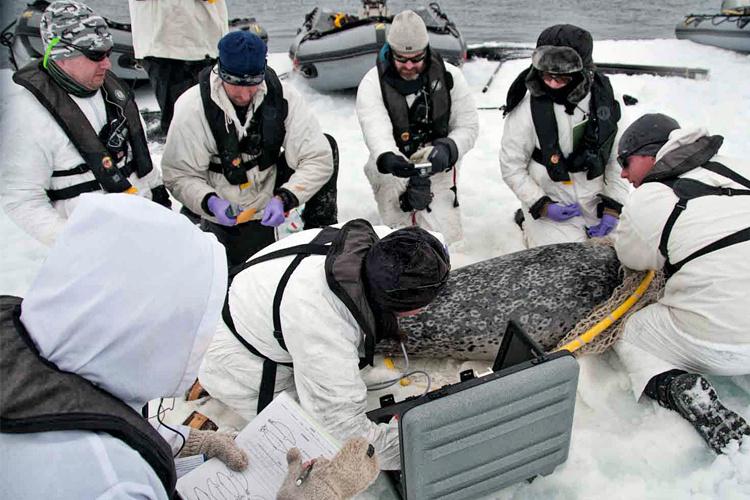 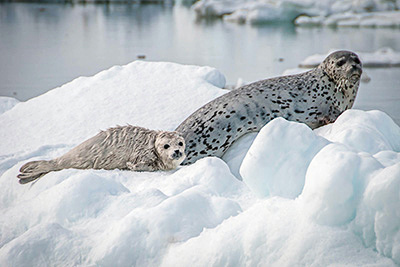 We've been having a lot of success at our present location. For most of the last week the winds have been steady from the north, bringing us new sea ice to survey each morning.

On April 13, we captured a spotted seal triad -- pup, mother and adult male. We were able to tag both the mother and the adult male and sample all three before releasing them. We also captured and sampled a ribbon seal pup. The pup’s mother was able to evade capture but she was very attentive, remaining close to the ice floe and watching us while we were working up her pup.

On April 14, we launched the small boats to try and capture another spotted seal triad. The adult male managed to evade us but we captured and sampled the mom and her pup and tagged the mom.

April 15, was a beautiful day. Blue skies, temperatures just above freezing and winds less than 5 knots made for a unique day in the Bering Sea…flat calm water. We will often see more seals hauled out on the ice on such days. The warm sun is believed to be important trigger and facilitator of the molting process. The ice conditions appeared to be ideal too and so rather than waiting to see a seal from the bridge of the Oscar Dyson we just launched the small boats and went searching ourselves.

The first animal we tagged was a sub-adult female ribbon seal. She was hidden behind a large snow drift and so we didn’t see her until we had passed by her floe. A quick turn of the tiller and we were on the floe before she had the opportunity to escape. The same calm weather conditions also allow sound to travel much farther however, and so sneaking up to capture a seal can be more difficult. We sighted another spotted seal triad but the adults left the floe before we reached it. We quickly worked up the pup and, shortly after being released, it entered the water to rejoin his mother watching us from the water. We were surprised to also see two young bearded seals. As is characteristic for this species, they were each on small ice floes with their head at the edge, ready to dive into the water at the first sign of danger. Usually, that would mean polar bears but we apparently warranted the same reaction. We finished the day after capturing and tagging an adult female ribbon seal (without a pup).

As the NOAA forecasts had predicted the wind shifted from the east and began to build. We launched the small boats to capture a triad of spotted seals but the wind and ice conditions made it difficult to sneak up on them from downwind and so we only managed to capture the pup. While working him up, the mom came back onto the floe for a closer look, but again she was too fast for us. With the wind building and the temperature dropping, we returned to the Oscar Dyson and prepared for the stronger winds forecasted over the next few days.

High winds forced the Oscar Dyson to head south out of the pack ice for safety. During the night the winds grew to 35 knots or more from the east. Snow and freezing rain coupled with a rising swell from the south made for an uncomfortable ride, but the crew of the Oscar Dysonmanaged to smooth it out as much as possible. By the afternoon of the 18th the winds had dropped enough that we started moving back towards the ice edge. The heavy fog though is proving to make that a slow process.

We will return to the ice and resume capture operations as soon as weather conditions permit.