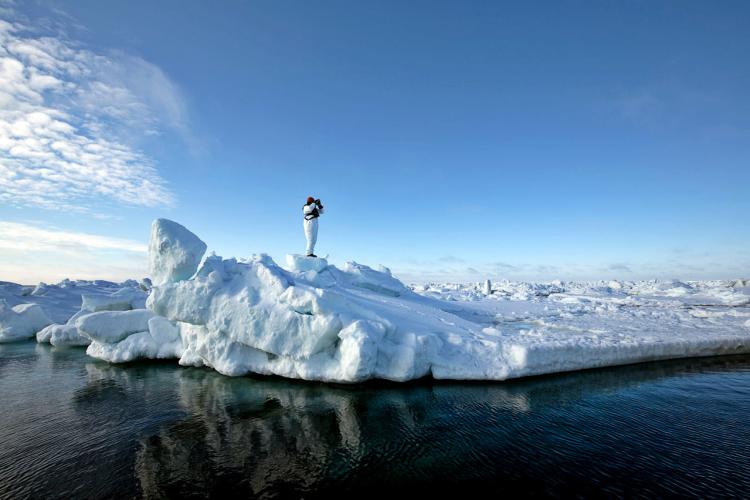 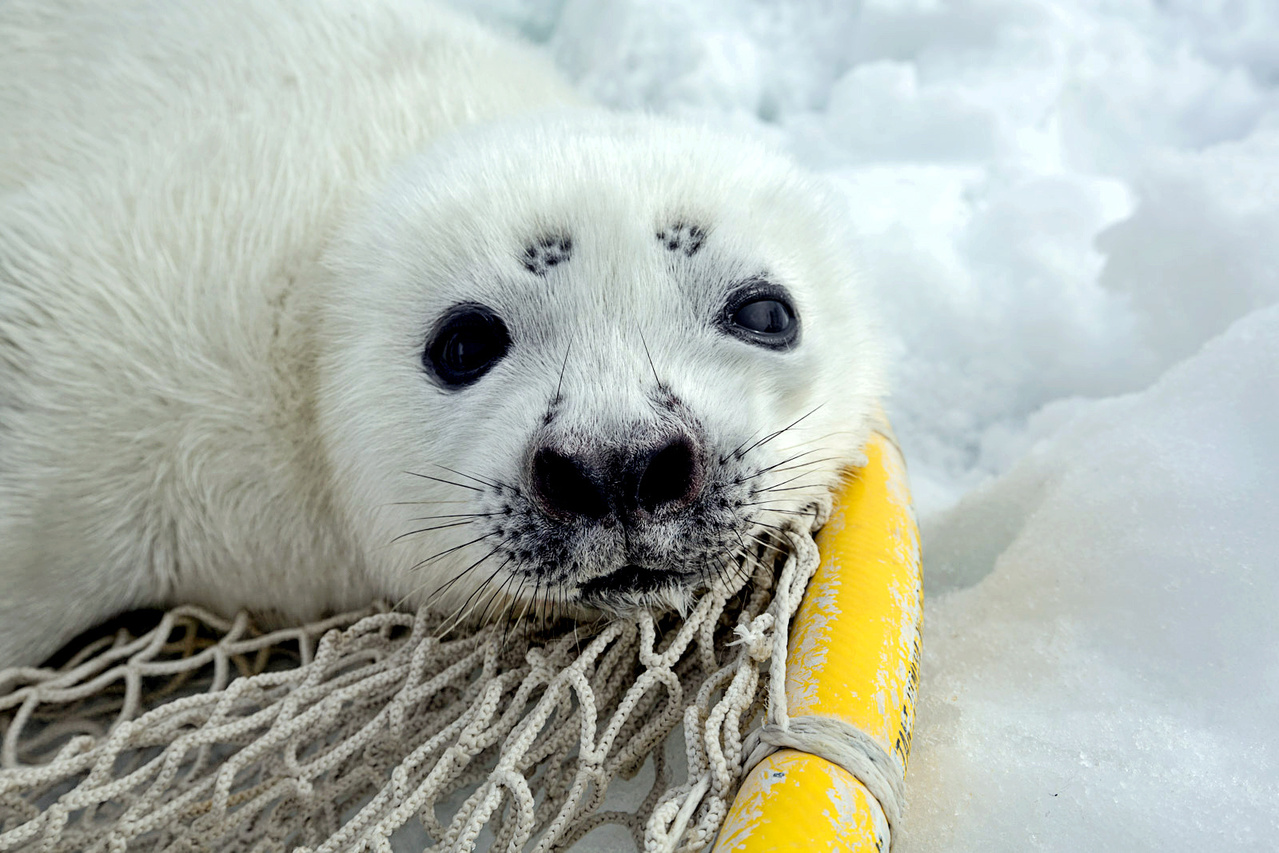 April 20 - We captured and sampled an adult female ribbon seal along with her pup. We also captured a spotted seal pup but her mother, and an attending adult male, avoided capture. Failing to capture a seal does not always mean that no data was collected however. Whether or not we capture a seal, we always check the floe they are on for scat (aka. feces or poop). If we find some we'll collect it and later filter it through a series of sieves looking for undigested parts. The most common parts are squid beaks and the scales or otoliths (ear bones) of fish. Often these hard parts can be identified to species giving us an idea of what the seal had recently been feeding on. 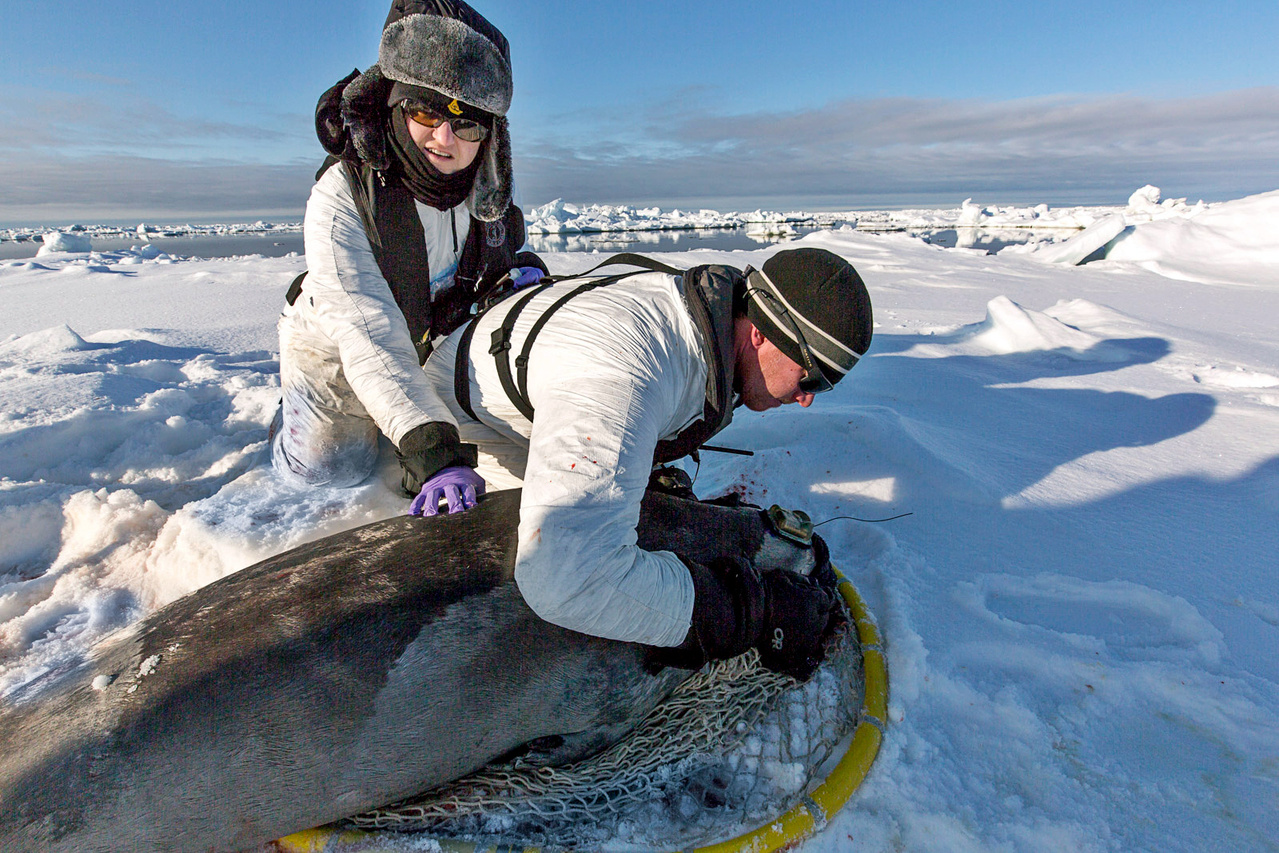 Despite a small dosage of valium, seals can still become stressed during the handling. To monitor vital signs and ensure the animal remains alert, the team includes a veterinarian. Here, Deb Fauquier, checks with Shawn Dahle to make sure the seal is doing well and ready for release.

April 19 - We made our way back into the pack ice, but high winds and fog continued to slow our progress and prevented us from launching our small boats.

April 21 - The winds and fog prevented us from launching. We saw a few seals from the bridge but they were all deeper in the ice pack and so impossible to capture.

April 22 - For the first time in a week we saw a little blue sky. Though windy it was "warm" (just below freezing) and we decided to launch the small boats after a spotted seal mother and her pup. After capturing, sampling and releasing them, we also captured an adult male ribbon seal (first so far of the cruise).

April 23 - Late in the day, we sighted an adult ribbon seal on a floe less than a mile from the ship and so we launched the capture boats. From the time we decided to launch the boats until they were all in the water the winds had moved the floe at least a mile further downwind and rotated it. This obscured the seal behind a pressure ridge making it difficult to relocate. Increasing wind speeds made the search more challenging and so after a little while we decided to return back to the ship. As soon as the last boat was brought back on board the floe had completed a full rotation and we saw the seal again. You win some, you lose some! 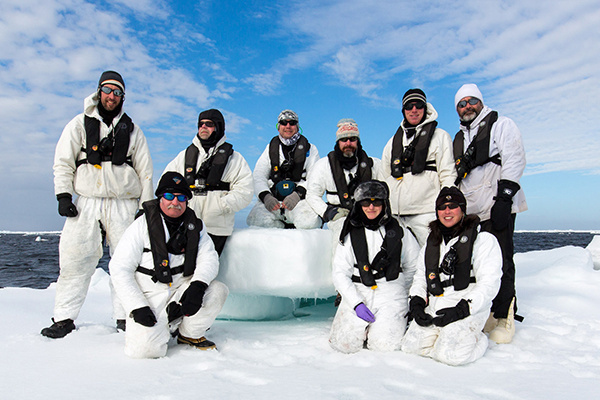 April 24 - We decided to launch the small boats to capture a spotted seal to the west of the ship. While getting dressed, an observer on the bridge sighted another seal closer to the ship but to the east. We decided to try for the closer group first and caught them. A ribbon seal mom and her pup. While finishing up the tagging and sampling process the Oscar Dyson had sighted a spotted seal mom and her pup. They were on a small floe that had happened to drift to within 1/2 mile of the Oscar Dyson. It was the first time I had ever received directions to a seal by looking at where a person on the bridge was pointing. Happily, we caught them too and worked them up in view of the Oscar Dyson.

Hours had passed from when we had seen the first spotted seal to the west. Shifting ice had moved that floe out of sight but the Oscar Dyson had located another group (a triad of spotted seals) to the west. Unfortunately, we were forced to approach their floe from upwind and the seals went into the water long before we had reached them. In all, it was a great day of capturing and a true group effort with the crew of the Oscar Dyson earning the MVP award this day.