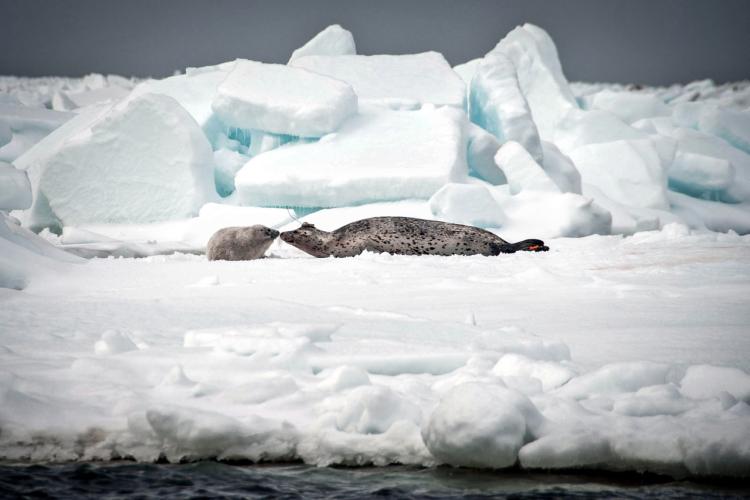 Highlights from our Final Days at Sea 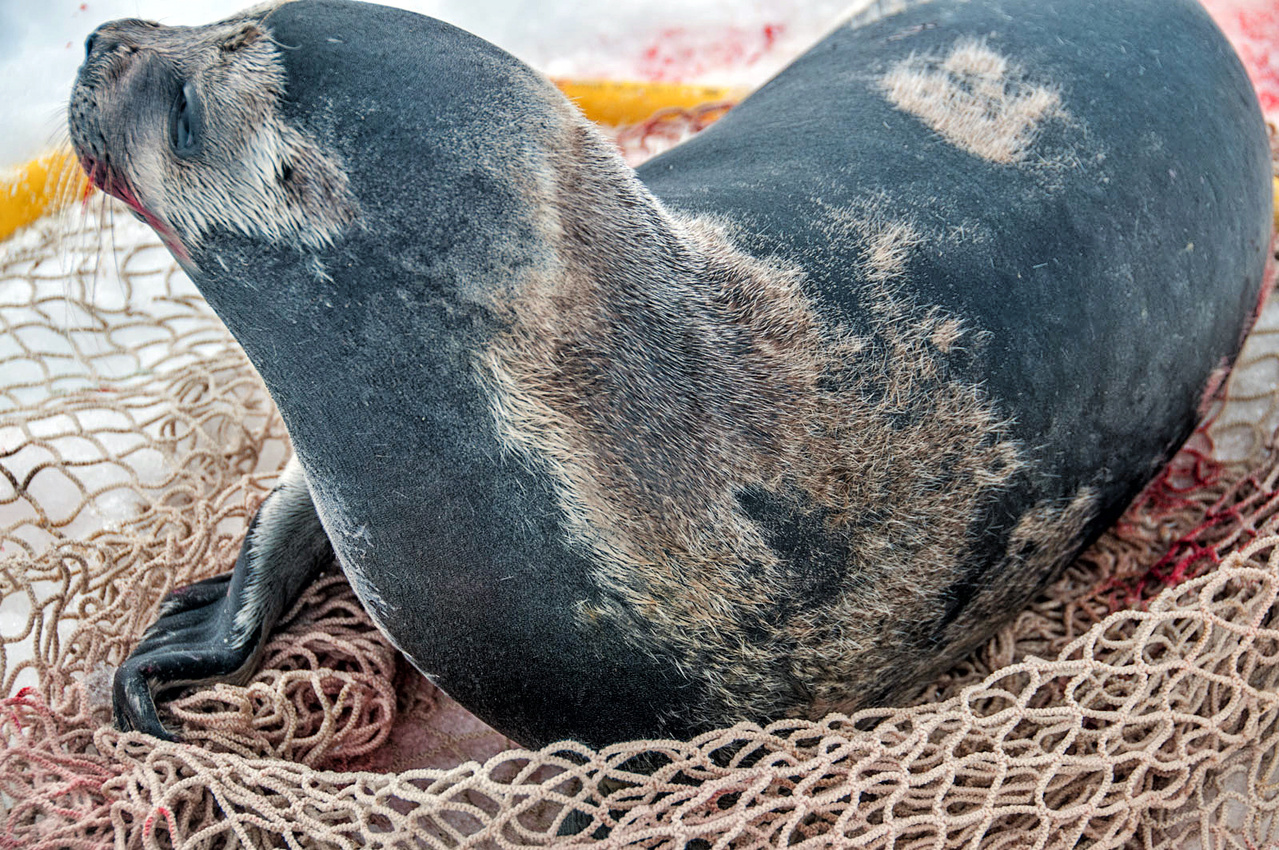 April 25 - We sighted a seal from the bridge and launched the small boats. It was a sub-adult male ribbon seal. It barely moved as we approached the floe to capture it, and we soon realized why. The seal was sick. His underbelly was raw and bloody and he was nearly bald. His black skin contrasted with just a few patches of hair on his face and flippers. This is the exact opposite pattern one might expect of a molting seal (the face and flippers usually molt first), and this was clearly not molt as there was no new hair, just bald skin.

All but one of the adult and sub-adult ribbon seals we have captured this year have had these bald patches but none so extensive. One of the objectives for this cruise is to collect information on the health and condition of these seals. In 2011, Alaska Native subsistence hunters, scientists and others began recording more than a hundred sick or dead seals with skin lesions, hair loss and other unusual and severe symptoms. 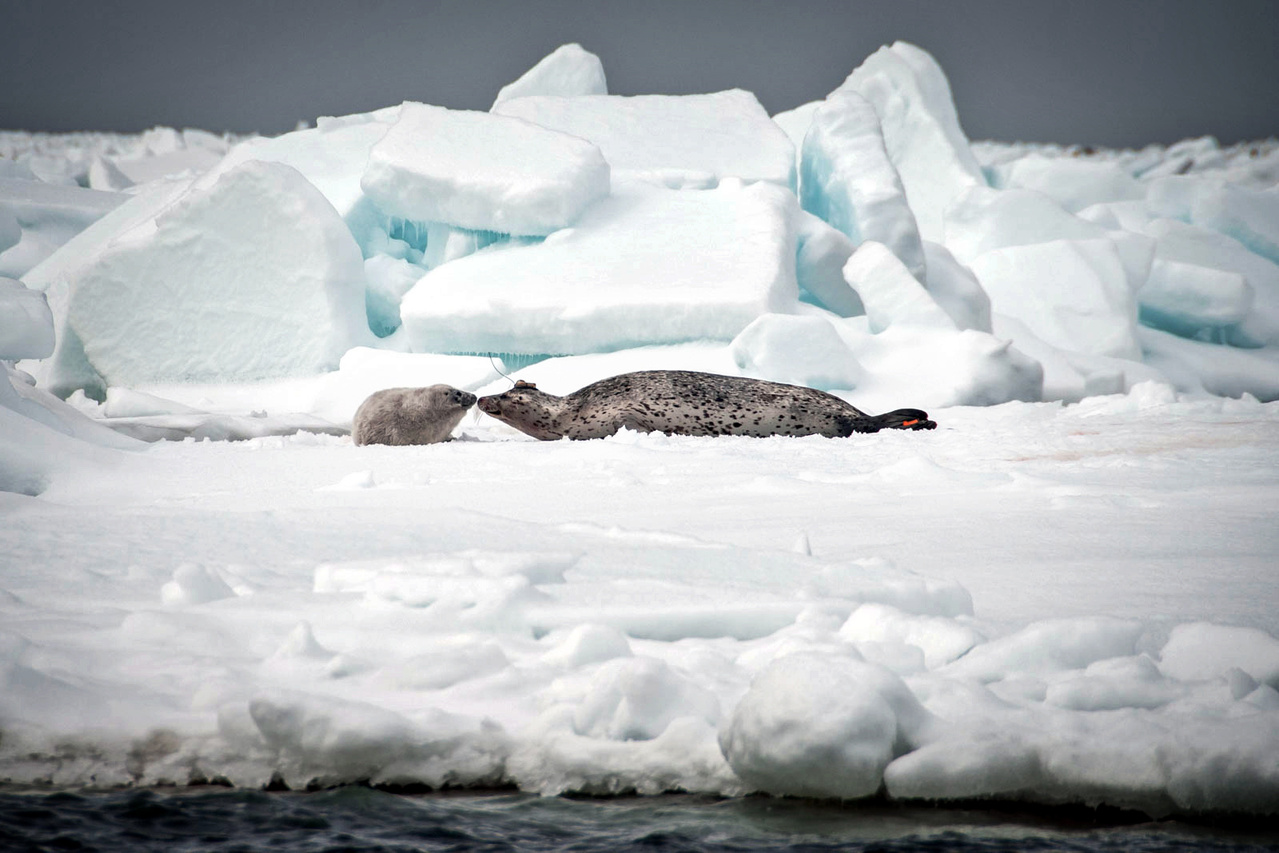 Though no new cases similar to those observed in 2011 have been discovered, many seals are now reported with abnormal hair growth and healing skin ulcers. It is possible that these seals are survivors of the initial disease outbreak in 2011. The tissue samples we have taken from these seals in 2014 and 2016 will be used to help answer that question.

April 26 - High winds throughout the day prevented us from launching the small boats on our last day in the marginal sea ice zone. We still maintained a bridge watch for seals though...just in case. At one point, we saw a single floe with a spotted seal triad and a ribbon seal mother pup-pair. It was hard to watch that floe with five seals drift past, us but it is never a good idea to try launching and working in 32 knot winds. We took advantage of the lee of the ship though to clean and pack all of the boat equipment on the back deck before turning south for Dutch Harbor, AK.

April 27-28 - We continued our transit to Dutch Harbor. En route we cleaned, inventoried and packed our gear for shipping back to Seattle, doing our best in the rough seas.

April 29 - We arrived Dutch Harbor in the morning and by the afternoon we had offloaded all of our gear into a shipping container waiting on the dock. We checked into our hotel and that night we joined much of the crew at a going-away party for one of the Oscar Dyson’s officers.

April 30 - We finished all of the last minute tasks (e.g., shipping, travel arrangements) and took a couple of hours to explore the island of Unalaska before our farewell dinner with some of the crew and officers of the Oscar Dyson.

The research cruise was a great success, and in large part it was due to the outstanding support we received from the Oscar Dyson. It was not the first time we have sailed on her and we hope it isn’t the last. We would like to thank everyone involved in the project and wish the officers and crew of the Oscar Dyson a "bon voyage" as they head back north to conduct more scientific research for NOAA.