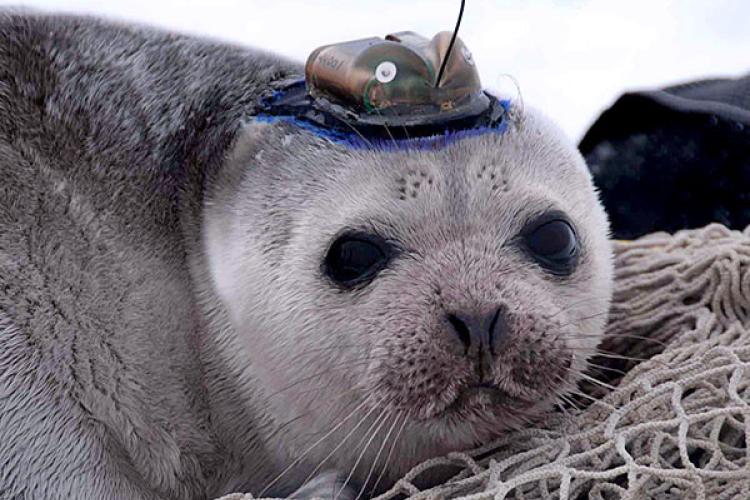 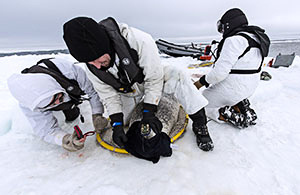 A satellite transmitter is secured to the head of a spotted seal prior to release.

The past few days have been relatively busy with seal sightings and captures each day. We have handled six seals in the past two days. The first three were spotted seals captured together as a 'triad' -- mother, pup, and suitor male. In addition, we also captured and released a ribbon seal pup (mom was too fast for us) and another spotted seal mother and pup.

Deploying telemetry devices (also known as bio-loggers) is a key component of our research and, on this cruise, we are relying on two tag models. The first is a typical tag used by seal and sea lion researchers across the world. The tag includes an Argos satellite transmitter for data transmission and location estimation. In addition, the tag also includes a pressure transducer which measures dive depth and a conductivity sensor that measures the percentage of time the tag is out of the water. 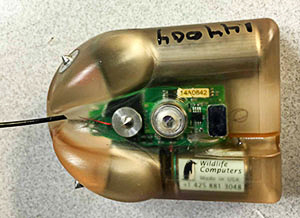 This tag is attached to the seal's hair with a special super glue that cures in 1-2 minutes. For most sub-adult and adult animals, the tags are small enough that we can place the tag on the head of the seal. This provides much better transmission and data throughput than if we were to put the tag on the back of the seal because the tags cannot transmit through salt water. However, for young animals, we usually put the tags on the back -- and those young seals are so fat and buoyant their backs usually pop out of the water when they surface to breathe. 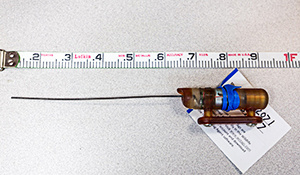 Because the tag is attached to the hair, it will only remain on the animal until the seal molts. Seals typically maintain a single coat of hair for one year. Over a period of a few weeks in May or June, ribbon and spotted seals will shed their old coat and grow a new coat. So, for this cruise, we only expect these tags to remain with the seal for 6-8 weeks. However, we can maximize the data throughput during this period and expect to have very detailed dive and haul-out behavior for the majority of the time -- later on, I will share some preliminary plots of dives and haul-out behavior to demonstrate the detailed information we get from these tags.

In addition to the tags we adhere to the hair, we have worked to develop a special tag that can be attached to the webbing of the rear flipper much like a earring. This has two advantages for our research. One, the tag will stay with the animal for several months to years as it will not fall off during the molt. Second, because the tag is attached to the flipper, the percentage of time the tag is dry accurately represents the percentage of time the seal is hauled out. The downside to these tags is that, in order to make the tags small enough for attachment to the flipper, the size of the battery had to be reduced. So, we only get a few transmissions from these tags per week.

How much time seals spend hauled out on sea-ice in the Bering Sea is of great importance to us. We anticipate reduced availability of sea ice in the future with a warming climate and we want to better understand how, where and when seals rely on sea ice as a key resource for resting, nursing and molting. In addition, we are also leading an international effort to estimate the population abundance of these seals from aerial surveys. Since we can only count seals that are hauled out (seals in the water just aren't visible with our cameras), we rely on our estimates of haul-out behavior to correct our survey counts to also include seals that were likely in the water during our aerial surveys.