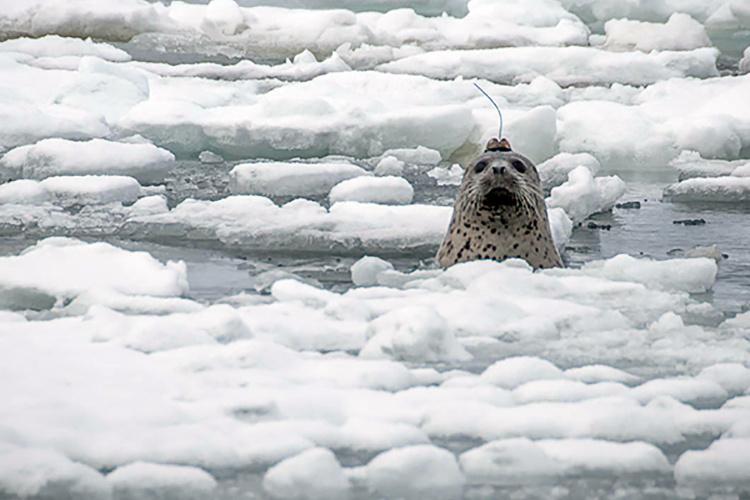 We have pulled together some preliminary results of this year’s ice-associated seal tagging effort. As I noted, we don't expect many of these tags to stay attached that long because the seals are approaching their annual molt (the head tags are only glued to the hair and when the hair falls out, the tags fall off). So, we are excited to learn as much as we can in a short amount of time.

Of the 24 satellite tags we deployed, we received transmissions from all 24 of the tags. This is great news as it's not unusual for a small percentage of the tags to not work. These are fairly sophisticated electronics that must be capable of operating in an extreme environment—temperatures below freezing, salt water, and repeatedly subjected to pressure at depths of over 500m. The tags not only provide location information, but also provide detailed information on the animal’s diving and resting behavior.

The head-mounted tags include a pressure transducer that measures depth every second. The tag captures when the seal is diving and when it is resting at the surface. For every dive, a simple record is created that notes the start time, maximum depth and end time. These simplified records are then transmitted back to our computers from the tag via the Argos satellite system. The Argos satellite system transfers data at a very low bandwidth—lower than many of the early dial-up internet connections you might remember. For this reason, only a few data records can be transmitted at a time. Additionally, the Argos system is a one-way communication platform so the tag does not receive any confirmation a data message was picked up by the satellite. The end result is that we don't get a complete record of the diving behavior but we usually get enough coverage to provide a good picture of the seal's behavior. The dive plots presented here include a grey shading in the background to indicate time periods where we have received data from the tag.

The plot of dives at right is for a sub-adult ribbon seal we captured early in the cruise. For the first few days, the seal was diving to about 140 meters. This is the approximate depth of the Bering Sea shelf and we can presume the seal was diving to the bottom in search of fish to eat. Later in the record, the seal made several dives to 400 meters, exceeding 500 meters a few times—that's almost 3x the height of the Space Needle!

The next plot shows the movement of this seal and you can see that those deeper dives coincide with movement off the Bering Sea shelf into much deeper water. In later days, the seal turned around, making its way back to the ice. Many sub-adult seals are molting at this time of year. Growing a new coat of hair requires quite a bit of energy. It makes sense that this seal would spend some time in productive waters, bulking up on fish, before returning to the ice to molt.

After release, the adult female ribbon seal spent most of her time at the surface—likely on an ice floe to nurse her pup—but also included several foraging periods with some dives 150-200 meters in depth. Over the next few days, and as the pup gets older, the time she spends foraging increases. For mother ribbon seals, nursing a pup can require a lot of calories. They appear to dive and feed when they can while nursing to get some of those calories back. Given how dynamic the marginal ice environment is (ice floes are constantly moving with currents or the wind) and how, to us humans, all ice floes start to look the same, it amazes us how spatially aware these animals are. We turn our backs for 10 seconds and it is difficult to relocate a specific ice floe. These animals make repeated 8–10 minute dives to 150m, all the while maintaining knowledge of where their dependent pup is. And, the pups themselves are quite capable. We know mothers usually move their pup to a new floe soon after birth (the presence of the placenta can attract predators) so the pups are capable of swimming in the cold water very early in life. Additionally, as the pup grows and nurses they likely move to new floes as needed until the pup is left to fend for itself (we refer to this as weaning) after 3–4 weeks.

Spotted seals have a slightly more complex interaction as they are often found in what we refer to as 'triads'. As we've previously mentioned, this consists of an adult female with a pup as well as a suitor adult male. This adult male is likely not the father of the pup, but instead wants to be the father of next year's pup. Female spotted seals are ready to breed soon after the pup is weaned. So, this male hangs around to insure he will be the likely father. For comparison to the ribbon seal, the dive plot at right shows the diving behavior of the adult female spotted seal. Note there is some foraging, but not as much as we see in the ribbon seal example. With only a few animals tagged, it isn't possible for us to know if these differences are true differences between species or just a representation of the various behavior strategies of mother seals.

The plot of movement is interesting when we look at the male and the female side by side. We can see the two animals remained in close proximity for the first few days after they were captured and released. After those first few days, while the two seals remained fairly close, we can't be sure whether they were still on the same floe or if the male found another female nearby. On approximately 21 April, the female made a clear change in course and went a separate direction. We suspect this might have happened just after weaning of the pup—and, maybe even breeding. Looking at the previous plot of the female dive behavior you can see that her diving and foraging behavior picked up after this departure which is another indication of weaning.

This is our last post for this year's cruise. We hope the information we shared was interesting and that we peaked your interest in these amazing seals. We are excited to have a new set of data to analyze and learn from. However, it’s good to be home with friends and family after a successful and safe month-long field season in a place where the weather and environmental conditions are extreme. Until next year!