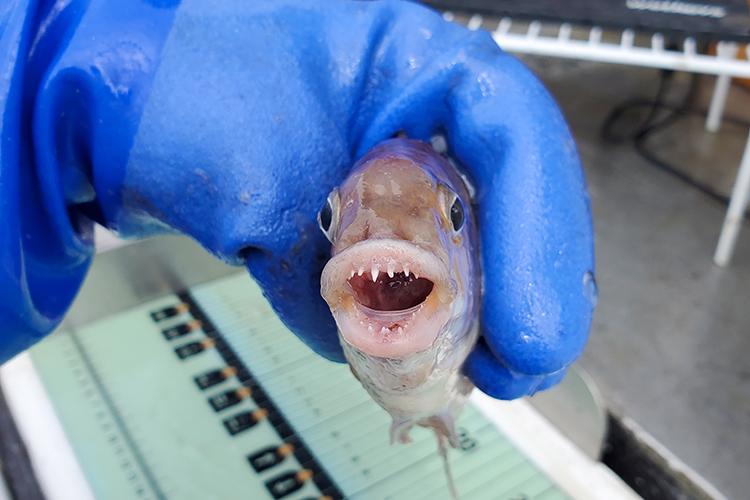 I was finally able to make it out on the F/V Darana R for the last 2 days of the fall restrictor rope trawl study. Talk about FOMO—the fear of missing out!

My colleagues who sailed before me reported catching and releasing multiple live thresher sharks and torpedo rays and seeing humpback whales and bluefin tuna near the boat. I had no such luck while I was on the vessel, but it seemed like I traded cool sightings for more manageable catches, for which I was grateful.

Before my trips, most hauls were fairly large. They had to bring the net’s codend over the side of the vessel instead of over the stern because of the weight. Some hauls contained upward of 12,000 pounds of fish, which left the scientific crew working non-stop. Mercifully, the tows while I was onboard the first day were considerably lighter, giving me more time to appreciate the variety of fish caught and the beautiful coastline of Block Island and Rhode Island Sound.

The first couple of tows I worked consisted primarily of longfin squid and butterfish. As we moved further east toward Martha’s Vineyard, the tows became heavier and dominated by scup.

When working up a catch, the fish are shoveled onto a waist-high platform to allow us to sort by species, and to separate species by size if there are noticeable differences. We sort fish into small trays and baskets. Once the whole catch has been sorted, we measure the length of every fish and total weight for each species. If there are lots of fish to measure, it can be difficult to get lengths for every fish before the next catch is brought onboard. When that happens we’ll measure only a subsample of a species dominating the catch, while continuing to measure all individuals of species present in fewer numbers.

Some more of the usual suspects we caught were:

In the spring survey, I was impressed with some of the largest fish I’d seen. This time around, the small ones caught my eye. Highlights for me were a few northern pufferfish all puffed up, a pair of rock gunnels, a cunner with a terrifying smile, and an Atlantic moonfish. I’ve never encountered a moonfish before. This one was about the size of a silver dollar and shimmered silver.

On my second day, the last day of the survey, catches were considerably greater, and consisted of small scup and butterfish. Trying to sort through lots of small, silvery, 1 to 4 inch fish considerably slows the measuring and weighing process. Larger catches meant we were working on deck non-stop right through to the next tow.

Then the weather turned foul and the mood on deck soured. Instead of smiling and chatting away as we did the previous day, conversation dropped to the bare minimum as we wrapped ourselves up in raincoats, heads down to avoid the onslaught of wind and rain. We worked as fast as we could to finish sorting the catch and get off deck to the warm, dry galley.

It wasn't exactly the picture-perfect day many of us wanted. It was a tough day to end the survey on, but that’s the way field work goes sometimes. To help me put it in perspective, I remind myself that any day I come home safe and sound is a good day.

Previous: 2022 Atlantic Clam Survey Presses On for Leg 2 Next: Critters of the Twilight Zone

Emma joined the Cooperative Research Branch in 2021 as a contracted Field Biologist. She deploys as a scientist for the Gulf of Maine Bottom Longline Survey and works with the commercial fishermen participating in the Study Fleet. In her spare time she likes to snorkel in the warmer months and quilts all year round.