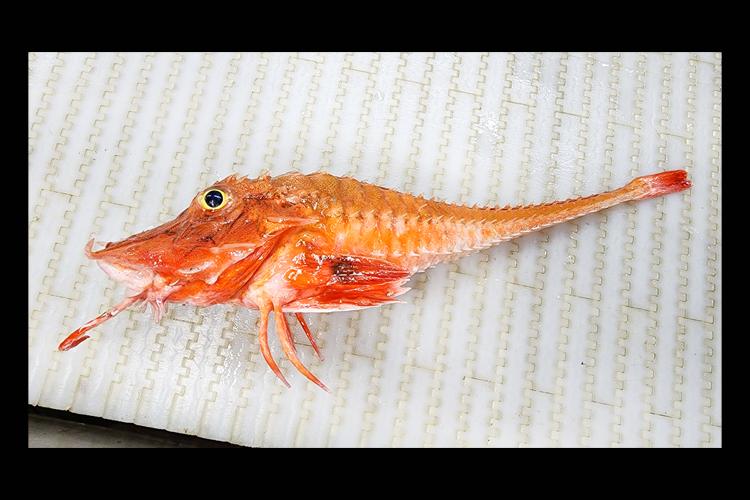 Leg 2 of Science Center’s Fall Bottom Trawl Survey is underway! We’ve had some lovely catches, including a handful that delve into deeper waters. Here are a few amazing critters we caught in the mesopelagic zone, or “ocean twilight zone”—an area of the ocean about 200 to 1,000 meters deep.

You might think a bright red crab like the Atlantic deep-sea red crab would stand out to predators, but red light does not penetrate very deeply into the water. At these depths the red light is entirely filtered out, and these crabs actually appear black, blending with the darkness all around. There is a commercial pot fishery for these crabs.

Armored sea robins are another red fish found in the mesopelagic zone. This species has very sharp spines along its body and considerable bony plating on the head and pelvic girdle. Quite the formidable defense! Check out this amazing video of an armored sea robin moving around and searching for food. NOAA’s Office of Ocean Exploration and Research captured this video during the 2019 Southeastern U.S. Deep-sea Exploration survey.

Blackbelly rosefish are another red fish that we frequently catch at these depths. It is a relative of the more common and commercially caught Acadian redfish. The black color inside its throat distinguishes this species from the others. Blackbelly rosefish use internal fertilization to reproduce, which is fairly uncommon in the fish world.

Shortnose greeneye and longnose greeneye have large lenses in their eyes that help to absorb what little visible light reaches the bottom. Under blue light, their eyes actually glow. These specialized lenses may allow them to see their prey better by absorbing the surface light so that only the light from their bioluminescent prey will pass through. These two species are also hermaphroditic—an advantageous reproductive trait among species in deep waters where it is often difficult to find fellow species members.

We don’t know a lot about beardfish behavior. The two prominent barbels on their chin distinguish these silver deepwater fish. They also have large eyes, typical for a deepwater species.

Grenadier are a unique looking fish from the Macrouridae family, a diverse and abundant group of deep-sea dwellers. Similar to their relative, the Atlantic cod, some grenadiers have specialized swim bladders that allow them to make “drumming” sounds, possibly to locate a mate for courtship. They also have large eyes to assist in low light and a complex, extendable mouth that helps them get a little more reach when trying to capture prey.

Deepbody boarfish (are another red, deep-dwelling fish. Its laterally compressed body shape makes the boarfish easy to identify. Their eyes are also relatively large for their body size, a common adaptation for fish that live in deep, low-light conditions.

Duckbills are aptly named for their broad, flattened snout. They have large mouths full of small, sharp teeth and, like many other deep water species, they have large eyes. You can see from the top-down photo below how the eyes are positioned near the top of the head, so the fish can easily see what is above them.

Previous: It’s the Little Things: Treasure from the NTAP Restrictor Rope Study Next: Props to Another Bottom Longline Survey Trip in the Books! 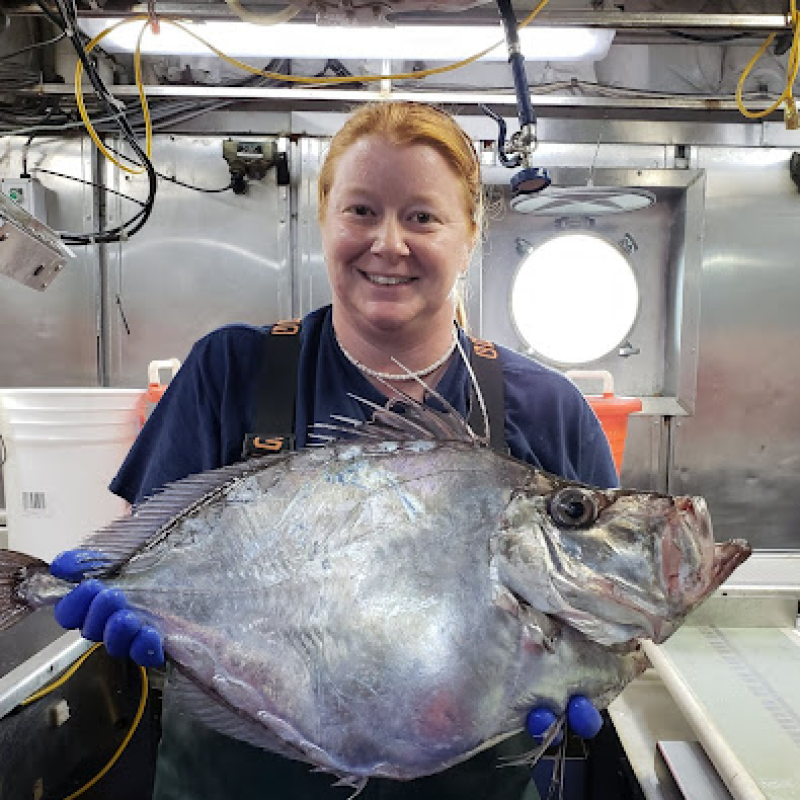 Katie is a Biological Science Technician for the Northeast Fisheries Science Center Age and Growth Lab in Woods Hole, Massachusetts. She specializes in summer flounder, Atlantic herring, ocean pout and golden tilefish. She also sails on various surveys for the Center. When she is not in the lab or at sea, she competes in the sport of dog agility with her three Shetland sheepdogs.