...even to help us search for endangered humpback whales in the Mariana Islands. 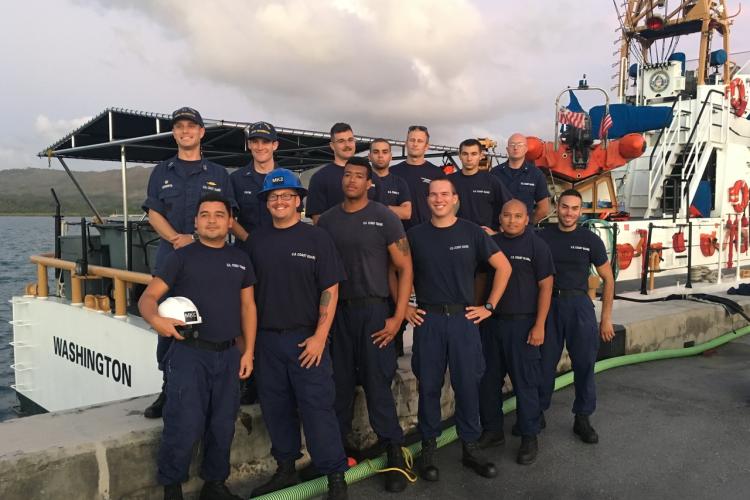 The motto of the U.S. Coast Guard is Semper Paratus, which is Latin for “always ready.” While this branch of the U.S. Armed Forces is best known for its maritime search and rescue efforts and law enforcement, one of its missions focuses on the protection of living marine resources, including marine mammals. In the Hawaiian Islands, the U.S. Coast Guard Sector Honolulu has been an invaluable collaborator of the Pacific Islands Fisheries Science Center and other partners in a number of marine mammal conservation efforts, such as transporting rehabilitated endangered Hawaiian monk seals back into the wild and assisting with monitoring and response efforts for entangled humpback whales.

As part of the Pacific Islands Fisheries Science Center’s Cetacean Research Program, we conducted small-boat surveys for humpback whales off Saipan in the Mariana Islands in February—March of 2015—2018. We have learned from these surveys that the Marianas are a winter breeding area for humpback whales of the endangered western North Pacific population. We are actively working to understand where in the North Pacific these whales feed during the summer. However, given that our surveys have been focused in the nearshore waters around Saipan, we are also trying to learn where else humpback whales go in the Marianas during the winter. 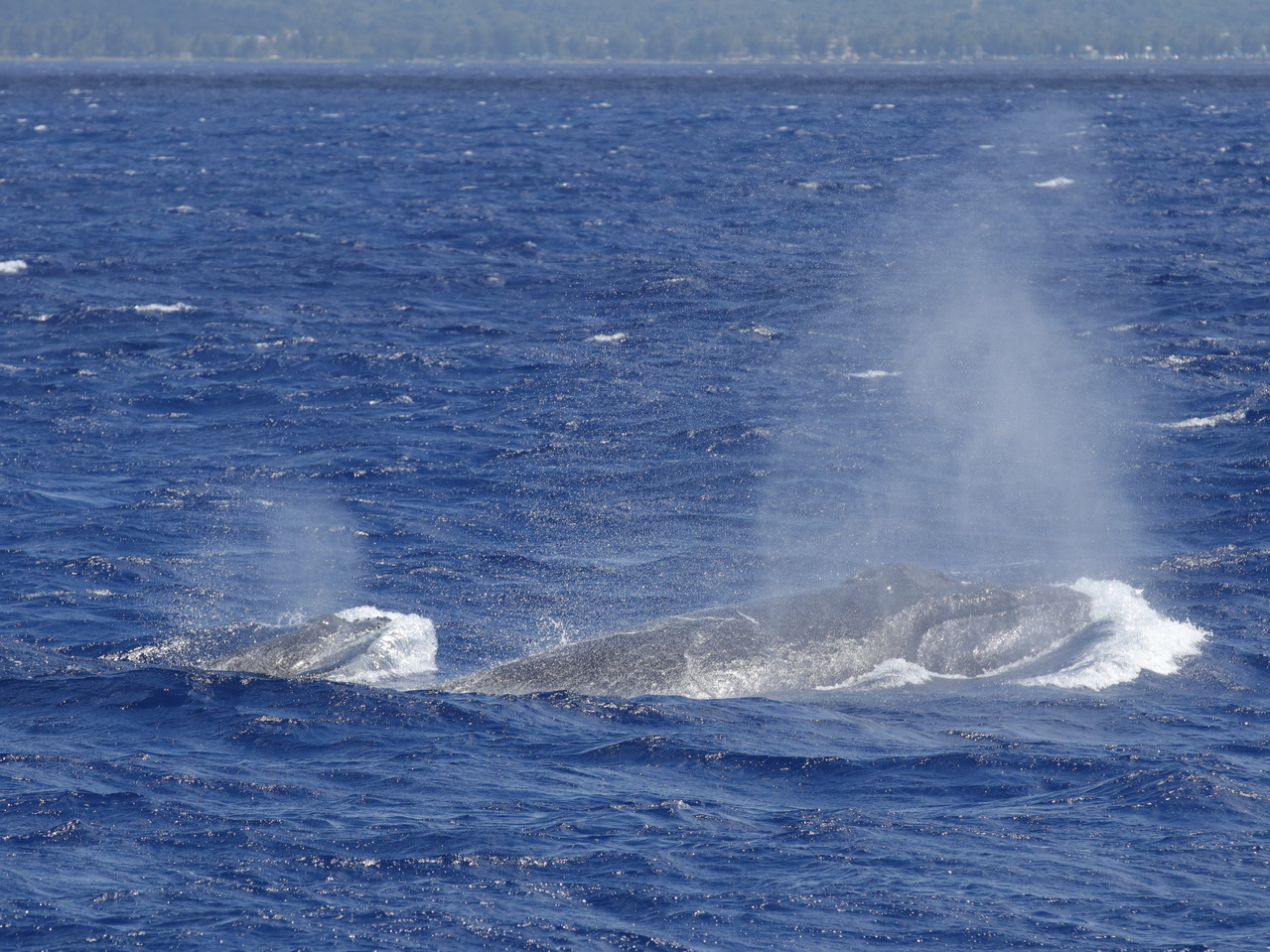 A humpback whale mother and calf surface in nearshore waters off Saipan. Where else in the Mariana Islands are these whales spending their time? (Photo credit: NOAA Fisheries/Marie Hill)

Humpback whales off Saipan, as in other breeding locations around the world, are most often found in shallow water areas, where water depths are less than 200 meters (approximately 650 feet). Other shallow areas exist around the Mariana Islands that humpback whales may use during winter. This year, we set our sights on exploring the offshore reefs south of Guam. These reefs are too far to reach using our typical nearshore survey vessels, which are too small to take on an overnight trip. We asked the U.S. Coast Guard (USCG) Sector Guam to help us with this exploration. Fortunately, they agreed!

In March 2018, after finishing our Saipan surveys, we headed to Guam, where we partnered with the USCG Sector Guam to survey the southern offshore reefs; namely, Santa Rosa Reef and Galvez Banks. On the evening of March 1, we boarded the 110-foot USCG Cutter Washington and transited down to the south end of Santa Rosa Reef, which is approximately 40 nautical miles south of Guam. While the primary mission of the Washington is search and rescue and law enforcement, the command and crew were ready to take on a new mission to help us find humpback whales. 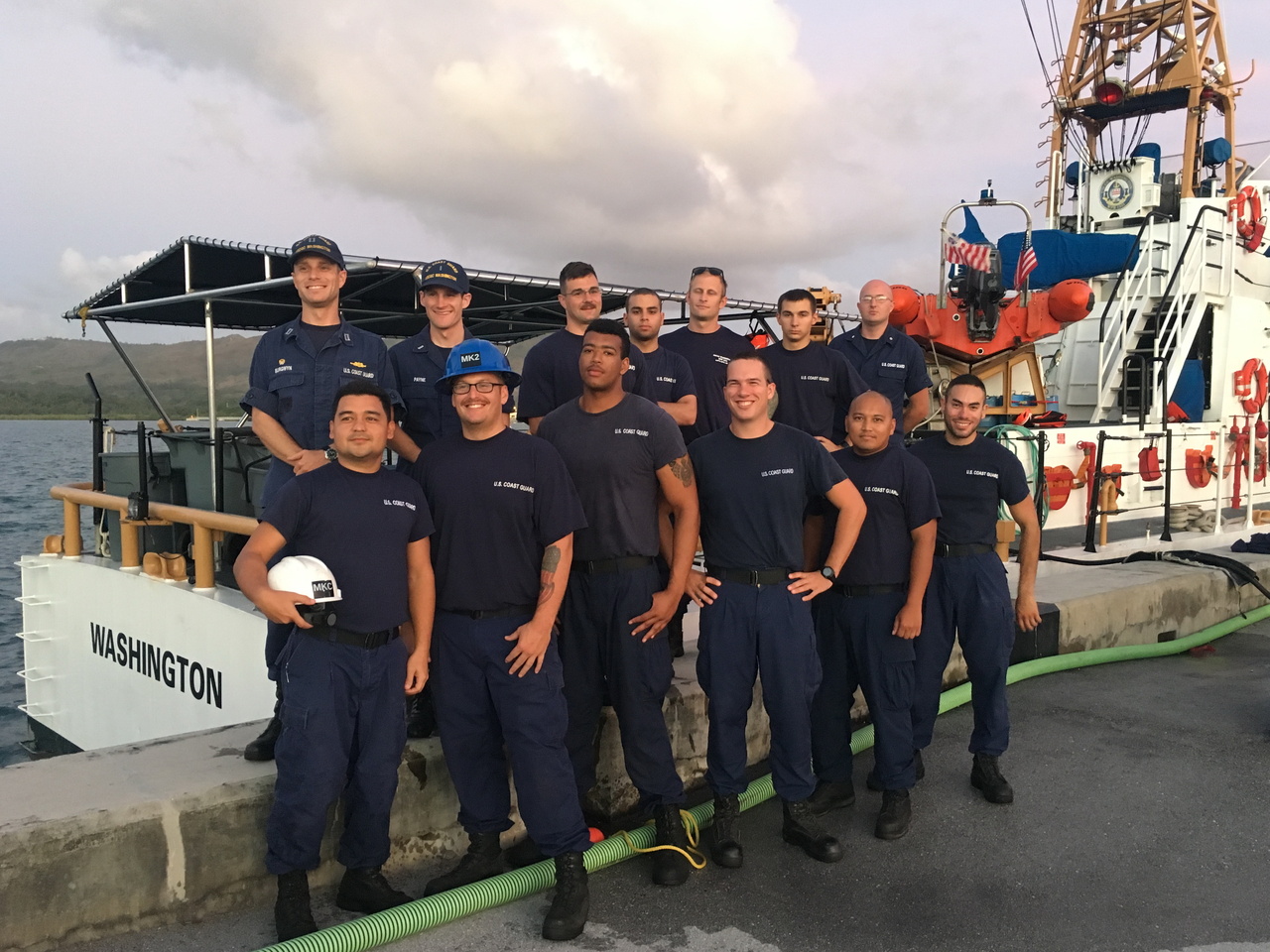 The command and crew of the U.S. Coast Guard Cutter Washington at the dock in Apra Harbor (Photo credit: NOAA Fisheries/Amanda Bradford).

The next morning, just after sunrise, we began looking for humpback whales. Our search continued throughout the day, as the Washington moved north, zig-zagging across the reefs. As we were returning at sunset, we saw one group of sperm whales just outside of the harbor, but unfortunately, we did not see any humpback whales. While it is possible that we missed seeing a whale or two during our survey, we are confident that groups of whales were not concentrated over these offshore reefs, as we have seen in the nearshore waters off Saipan. Another survey of this area, perhaps earlier in the winter breeding season, would help us determine if humpback whales aggregate in appreciable numbers over the offshore reefs south of Guam. 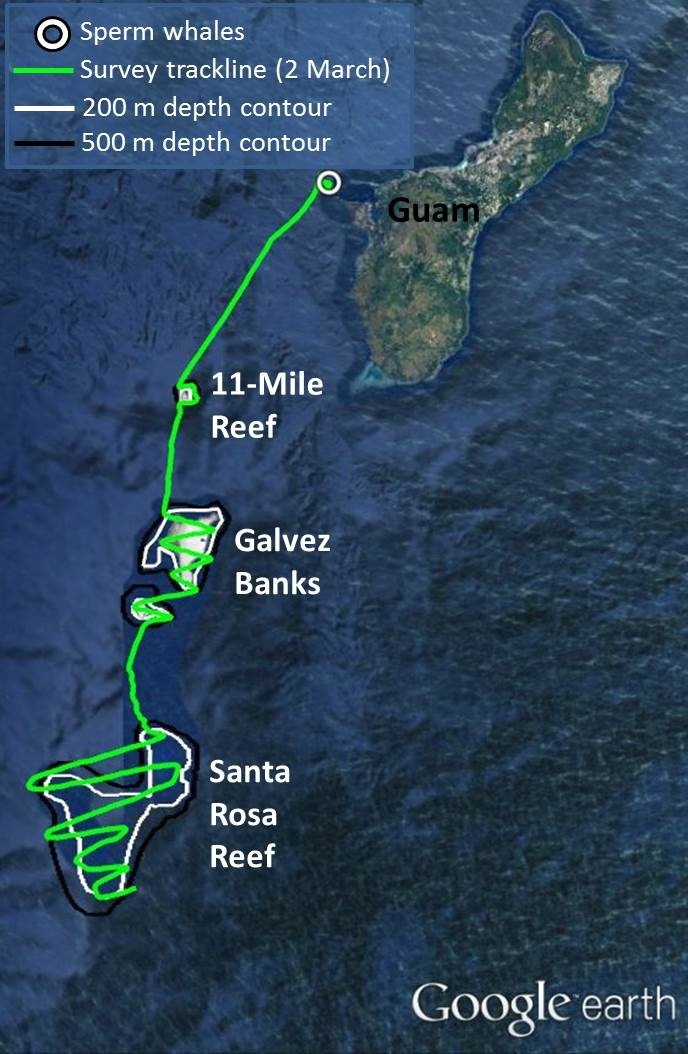 The path we took aboard the U.S. Coast Guard Cutter Washington to survey for humpback whales over offshore reefs south of Guam in the Mariana Islands. Our survey track line (green line) started on the south end of Santa Rosa Reef and ended just outside of Apra Harbor on the west side of Guam, where we made our only sighting of the day–a group of sperm whales. 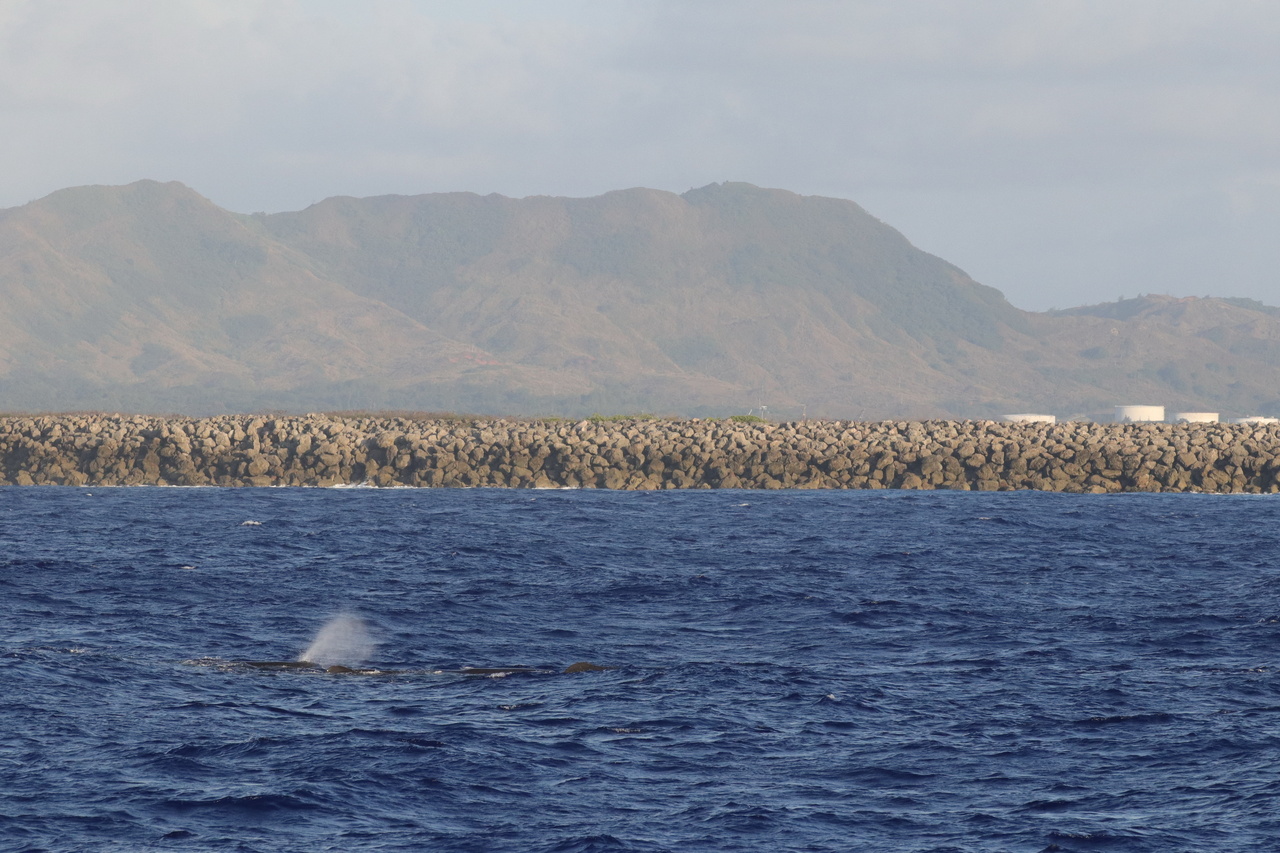 Sperm whales seen outside of Apra Harbor at the end of our survey for humpback whales off Guam (Photo credit: NOAA Fisheries/Amanda Bradford).

After our 24-hour trip, we have an even greater respect for the command and crew of the Washington. We have a lot of experience on ships and small boats of various types, but we had never sailed on an Island-class patrol boat like the Washington. We were warned ahead of time that it would be tight quarters and a rough ride. Confirmed! We give major props to this group of thirteen sailors that will go out on the Washington for a week at time. We are very proud of the fact that we managed to keep our “sea legs” and not “feed the fishes”—although we had a couple of moments where we thought we might!

While the lack of humpback whale sightings was disappointing, overall, we consider this collaborative effort a success. Working with the USCG Sector Guam was a great experience, and we hope to maintain this partnership into the future. Humpback whales likely use other shallow water areas around the Mariana Islands. Some of the areas are far from harbors on Guam and Saipan, and the seas are often rough in the winter. So, we would need a relatively large vessel to look for whales in these areas. We are ready for another humpback survey aboard the USCG Cutter Washington! 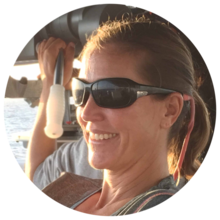 Marie Hill is a Cetacean Biologist with the Joint Institute for Marine and Atmospheric Research and the Pacific Islands Fisheries Science Center. She earned her B.S. in Marine Science and Biology at the University of Tampa and her M.S. in Biological Oceanography at Florida State University. She loves traveling and any outdoor activity but especially hiking and surfing. 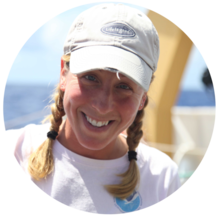 Amanda Bradford is a Research Ecologist with the Pacific Islands Fisheries Science Center's Cetacean Research Program, where she focuses on cetacean population assessment. She received her B.S. in Marine Biology from Texas A&M University at Galveston and her M.S. and Ph.D. in Aquatic and Fishery Sciences from the University of Washington.  When she's not counting whales and dolphins, she enjoys hiking, traveling, running with her dog, and foraging for liliko'i.

All photos taken under NMFS and CNMI DFW research permits.