Marine resource specialist Giovanni Gianesin asked fellow survey participants what their most wow-worthy moments were this fall. From eerie fog and a regurgitated octopus, to huge fish and a feeding frenzy, their answers do not disappoint! 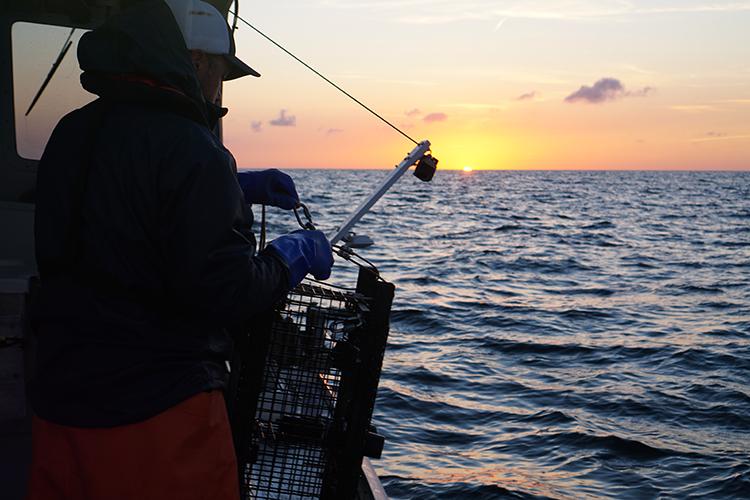 For many of us in the Cooperative Research Branch, fall heralds a chorus of leaf blowers, the purchasing of gourds, and … the fall Gulf of Maine Cooperative Bottom Longline Survey. Having completed our ninth year, the commercial fishing vessel crews and sea-going scientists have become accustomed to the routines and seasonality of what we catch. But there were a few things that stood out this year.

For me, the weather we experienced is what I will remember most. This fall, we were very lucky to have great weather, allowing us to complete our 45 stations earlier than usual. However, on our last trip, field biologist Emma Fowler and I left Sesuit Harbor, Massachusetts, shrouded in thick fog. Even with an experienced captain running the vessel, there’s always some uneasiness transiting through the harbor when visibility is limited. Everyone is on watch for a boat to suddenly appear out of the mist. For 2 days, the fog crowded in on us. With very calm seas, and enveloped in the white curtain, we were bereft of a horizon or any visual change beyond daylight. This left me unsettled, with a surreal feeling of existing in a void with no discernable ending or beginning.

Almost everyone working the survey noted that besides the fog, we had some unusually kind weather. Of course the weather wasn’t the only noteworthy moment. So, I decided to ask each person working the survey what theirs was. Here’s what they had to say 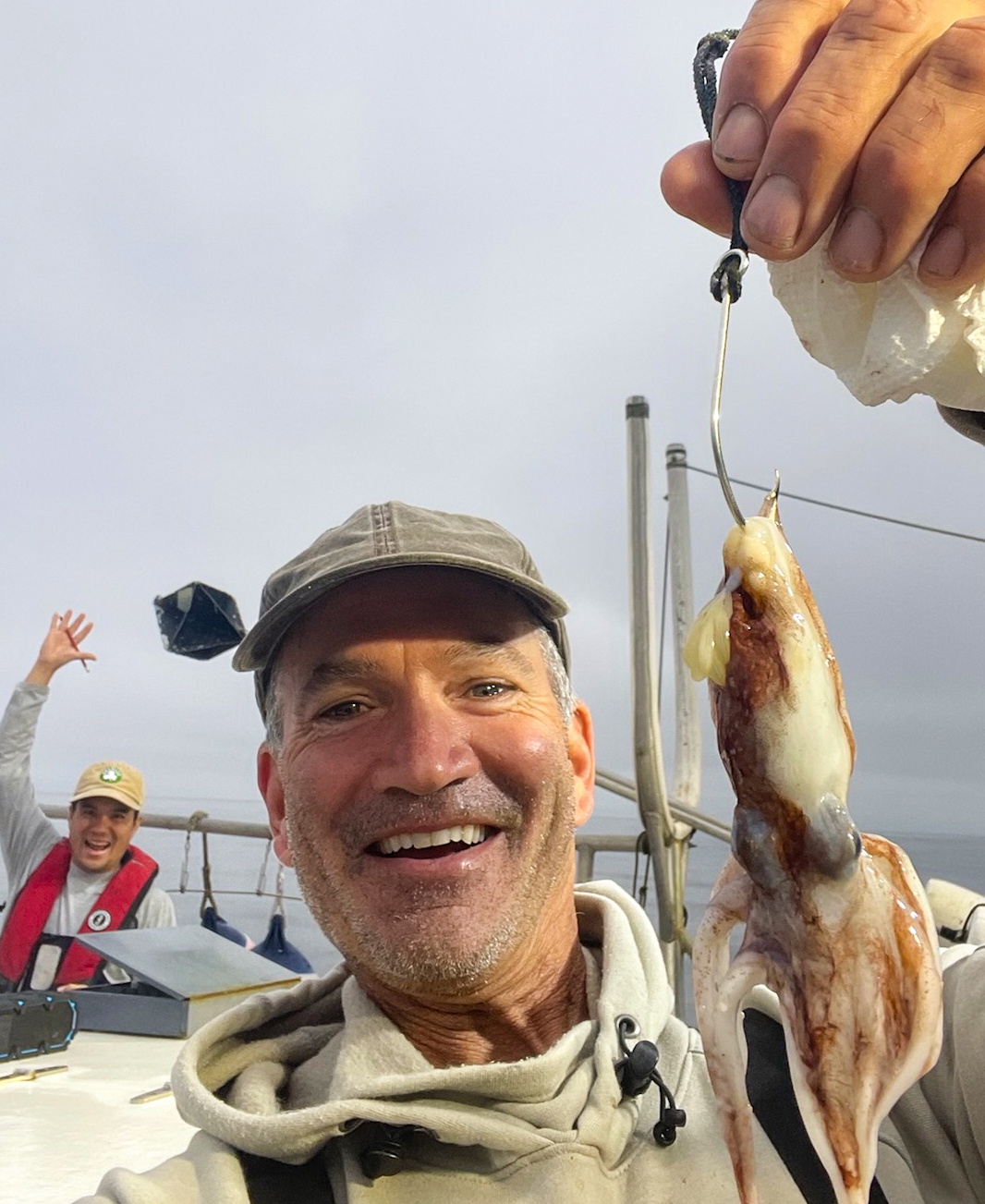 Captain Eric was excited to see more Atlantic cod than in past years, including a few large individuals. He was also able to check off one item on his personal bucket list: an octopus. It came up in an unexpected way. As a large white hake came onboard, it regurgitated a recent eight-legged meal right in front of Eric. As it arrived, we heard an excited shout. Expecting a large halibut, we peered around the corner to see Eric excitedly holding the small animal. As soon as the gear was onboard he grabbed his phone from the wheelhouse and took these photos. We’ve preliminarily identified it as a glowing sucker octopus, a small deepwater bioluminescent species.

Near the maritime boundary with Canada, at one of the farthest stations from shore, the crew on the F/V Mary Elizabeth noticed something distinctly humanmade. It was lying among the rocks, sea stars, and sea anemones that typically populate our videos of the seafloor. They were amazed to see a large propeller sitting on the bottom. Phil has been fishing his whole life and was shocked. He said, “What are the chances that we dropped the camera right on top of this thing, well over 100 miles from shore? I don't even know of a single person who has lost their propeller at sea, let alone to have at that distance. It’s just incredible to have that $5,000 piece of metal in the middle of the ocean show up on our camera.”

Dave heads our bottom longline survey efforts and had a large role in its inception and design. He tends to take the long view when assessing each survey season. This year, he noticed that the large and unwieldy barndoor skates were more widespread—found at more locations than in the past and covering a larger area. We also caught large amounts of red hake this year. That might have contributed to all the white hake, monkfish, and barndoor skates we caught—they were chasing after a meal of red hake. Dave said it was interesting to see American lobster, skate, summer flounder, cusk, and even hagfish in our video footage. We rarely see them in our videos.

The large amount of white hake at a few stations stood out to Jack. It wasn’t just the number of individuals either, but the size—some of them were large. After processing fish for samples, they’re placed into plastic totes stored in the hold. When big bulky white hake are added to the totes, they make a distinctive and resonate thud. Hearing that thud dozens of times was a sign that we’ve collected some valuable data and the fishermen had some good product to sell. It’s a win-win that is part of the cooperative research process.

Despite seeing thousands of fish this season and sampling hundreds of them, one individual fish stood out to her—“snowflake cusk.” It’s an otherwise common cusk made slightly less ordinary due to a unique white spot in the middle of its head in line with the dorsal fin. Emma’s also a bird person, and was excited to get a photo of a pomarine jaeger. They’re related to gulls and are fast, agile, and the biggest of the three jaeger species.

At a station just a few miles northeast of Provincetown, Massachusetts, Ben and I got to watch a feeding frenzy as we were cleaning up our workstation. Off our starboard side, we watched as a flock of birds dove down to feed on bait fish while pilot whales and bluefin tuna fed on the fish from below. As an avid recreational fisher, Ben was thrilled to watch the big fish in action.

Previous: Props to Another Bottom Longline Survey Trip in the Books! Next: Bottom Trawl Survey Creatures Great And Small 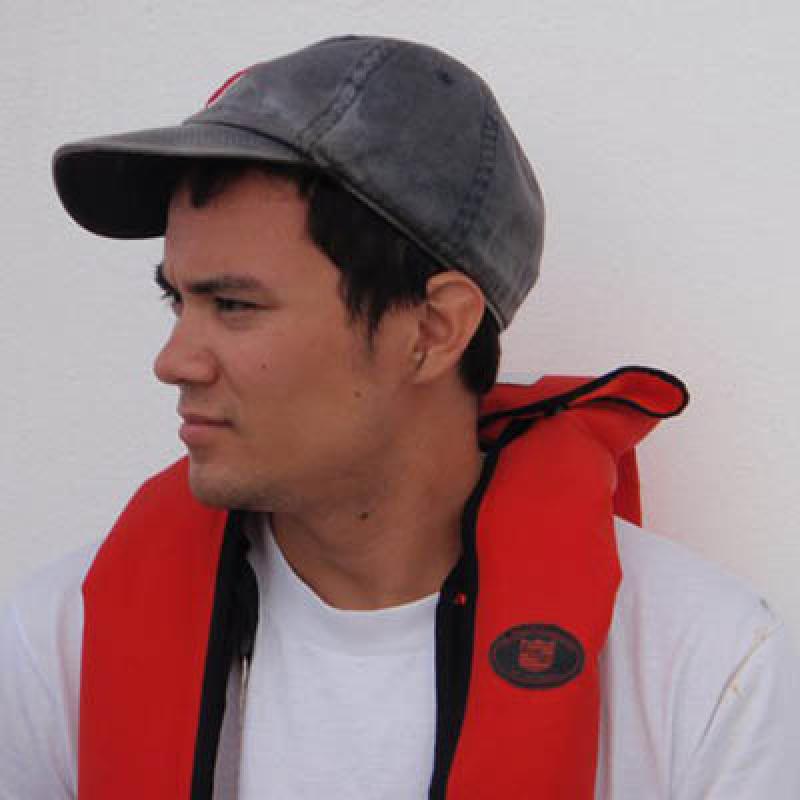 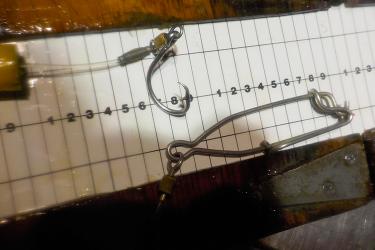 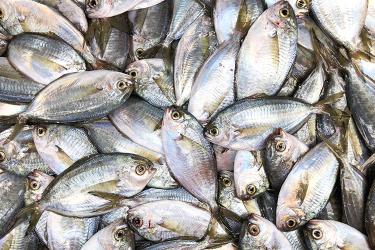