Once More Into the Canyons: Exploring Deepwater Communities

Blog #4 from the 2019 Northern Neighbors cruise on the NOAA ship Henry B. Bigelow exploring deepwater communities off the coasts of the U.S. Northeast, Atlantic Canada 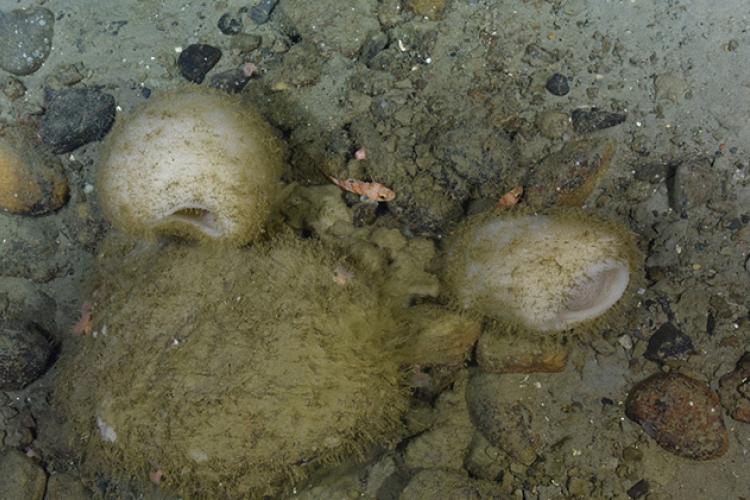 Chief Scientist’s Weather Report: A chance of showers and thunderstorms early on, followed by dense aggregations of corals on boulders. 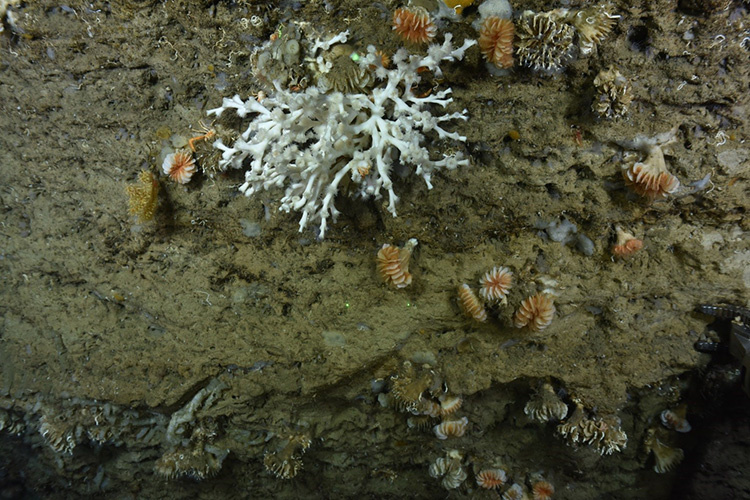 We crossed into Canadian waters and went straight to work surveying Corsair Canyon on June 18 and 19.  Canada has committed to establishing a national network of Marine Protected Areas (MPAs) by 2020. Due to previous extensive deep-sea coral surveys and sampling, Corsair Canyon was declared a “Sensitive Benthic Area” (or SBA; “benthic” means the bottom of the ocean). Subsequently, Corsair Canyon was closed to protect high abundances of deep-sea corals from potential damage from fishing activities. However, there are still many ecological questions about this canyon that need answers. For example, there’s a lack of data 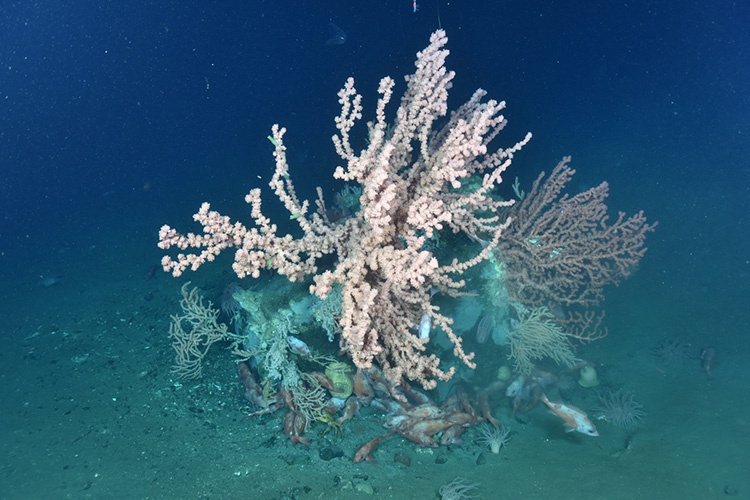 Coral “oasis” with a dense aggregation of redfish at the base of the boulder in a Corsair Canyon tributary. Depth 519 meters. Photo credit: 2019 Bigelow/ROPOS U.S./Canada Transboundary Expedition

on fish abundances and habitat associations with the corals, and there needs to be a better understanding of the connectivity between deep-sea coral populations. These current surveys will help to answer these questions as well as potentially refine the boundaries. 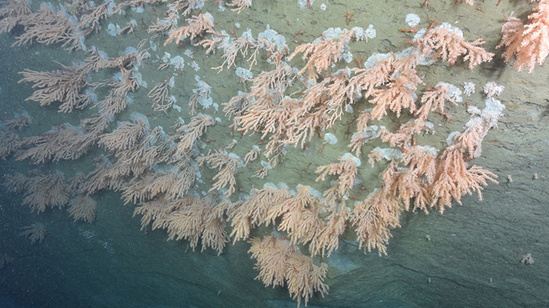 Our June 18 survey of Corsair occurred in depths between 774 – 142 meters, so a lot shallower than previous dives. And the coral fauna reflected this in the dazzling array of the three most abundant gorgonian corals: bubblegum (pink and white versions), Primnoa (orange), and Paramuricea (yellow). They were large and abundant, and often found in dense aggregations, or, as was seen in our 2017 Corsair survey, covering the tops of solitary boulders that were surrounded by mud. In one spot we found a wall covered in large Primnoa as well as small stalks of younger ones; we called it a “Primnoa nursery.” 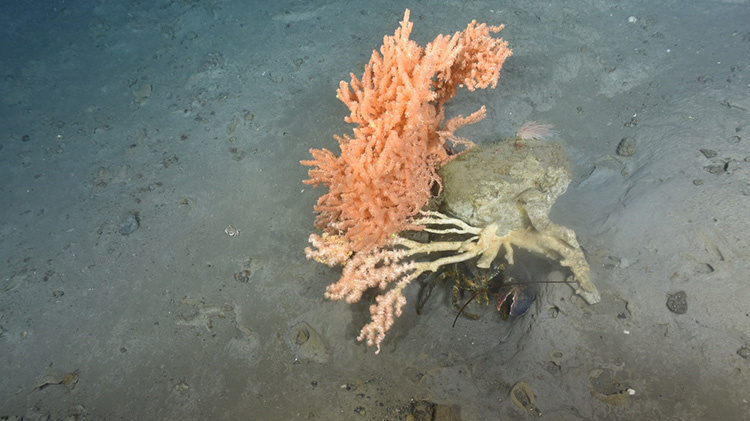 Associated animals in and around these corals included redfish, spider crabs, squat lobsters, and, when the coral was on a boulder, there would often be a lobster taking shelter beneath it. Not associated with the coral but found here were Russia hat sponges, which are a key species in the Northwest Atlantic because they provide habitat for other invertebrates and fish. Also a giant Mola mola or ocean sunfish swam by at 237 meters depth (roughly 778 feet deep), which was a startling sight considering that we mostly see them at the surface, with their odd shape and one fin sticking out of the water. You can see how different this area was compared to our previous dives. 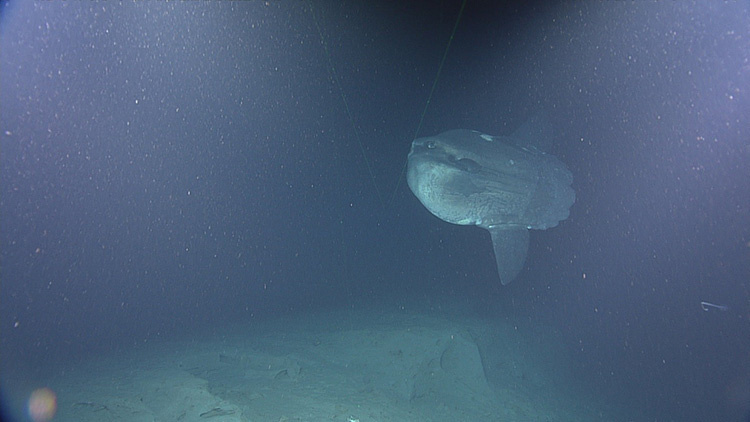 June 19 we explored a tributary canyon off of the northeast side of Corsair, at depths ranging from 1169 – 318 meters. We observed more muddy bottoms and slopes compared to the main stem, so overall there were less corals to be seen. However, we did find bamboo corals, and everyone was excited when we found several small colonies of Lophelia, which is a first for Corsair Canyon and the canyons southwest of the Northeast Channel. Also, as was the case on previous dives into Corsair, we found aggregations of large bubblegum, Primnoa, and other corals covering solitary 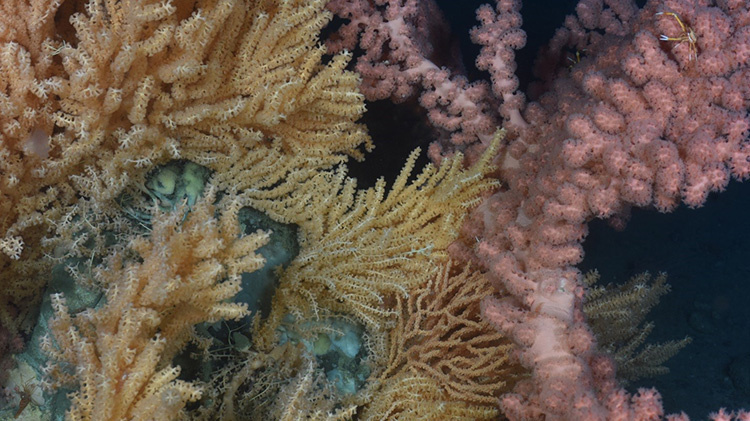 boulders. We took to calling these coral covered boulders as “oases,” especially since they harbored numerous other animals, such as redfish. At the end of the dive, after traversing a long stretch of muddy bottom, we finally found a thriving coral oasis with a dense aggregation of redfish around it. It was a magnificent sight, and a perfect ending to the dive.

Previous: A Slippery Slope: Finding Corals and Other Creatures in Deepwater Canyons Next: Aging Well: Learning From Deepwater Corals Hundreds Of Years Old