The acoustics lab is continually watching the echosounder data as it's collected, and makes the call "It's time to fish!" when they decide to sample an aggregation. From the moment the call is made, several departments on the ship spring into action. It's a complex choreography between the scientists, officers, and deck crew on how best to fish to catch our target echosign, and avoid sampling echosign we don't want. The officers on the bridge review the prevailing winds, currents, and sea state to determine the best approach to steer the ship - their goal is to have the net reach equilibrium depth (EQ) at the requested location, while keeping an eye on bathymetry at shallow sites. The deck crew prepares the net, riggings, trawl doors, and all hydraulic systems. After coordinating with the science team and survey technicians to add equipment such as the net camera and temperature depth recorders (TDRs) to the net, the deck crew are the ones that ensure the net goes into the water ready to catch some fish! 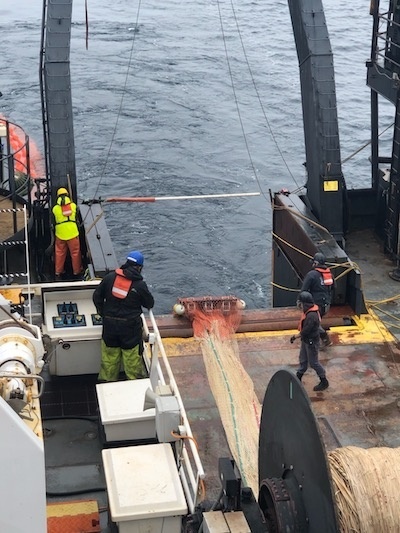 View of the Shimada back deck as the midwater trawl is deployed. Photo: NOAA Fisheries 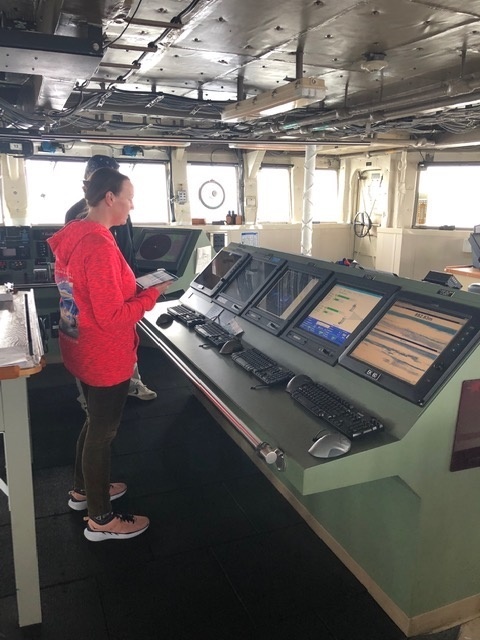 On the bridge, monitoring net sensors and echosounders during a midwater trawl. Photo: NOAA Fisheries