Finding the unexpected, and practicing safety procedures, are part of the seagoing experience during the bottom trawl survey. 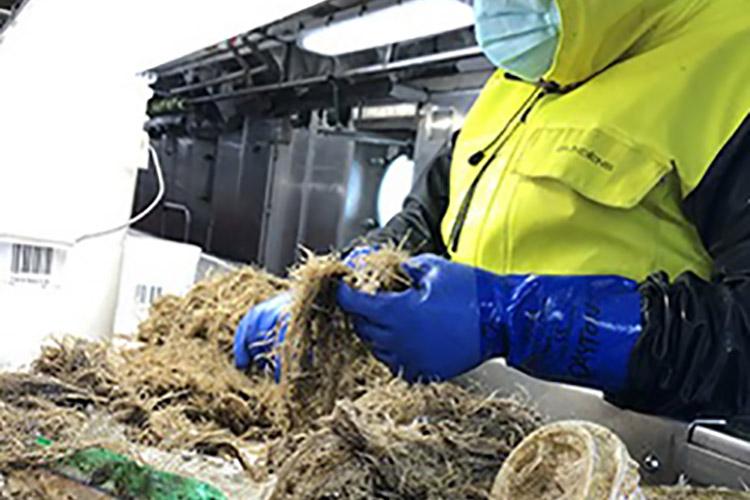 Scientist Josh Dayton carefully sifts through hydrozoa to look for juvenile fish. In the foreground are some plastic trash that was found embedded in the hydrozoa. Credit: NOAA Fisheries/Christine Kircun

We are only about halfway done with the final leg of the bottom trawl spring survey, but I already have highlights to share.

While sampling on the northern part of Georges Bank, several tows were full of hydrozoans—thousands of polyps living in an interconnected colony on the ocean floor. Hydrozoans are tiny predatory animals that almost always form colonies. They have complicated lifecycles that may include free-swimming medusas, which are jellyfish-like, and/or stationary polyps, which are more coral-like. At first, the hydrozoans we caught may be mistaken for a type of seaweed, but they are animals.

Another animal spotted among the hydrozoa was a caprellid. These small crustaceans are also known as skeleton shrimp. With their slender body, two large antennae on a small head, and claw-like gnathopods, it’s very easy to recognize these creatures. The tricky part is actually finding them!  Also, some large pieces of plastic were also mixed in among the mass of hydrozoa. We found a plastic cup, zip-locked bag, and a sandwich cracker wrapper. It’s unfortunate that finding trash is common.

Between Georges Bank and the Bay of Fundy (near Nova Scotia and New Brunswick, Canada), we found a beautiful sponge. It was still attached to its rock, and its shape ballooned upwards. At the top was an opening that showed the inside where you can easily see all the pits and pores. It almost looked like the inside of a cave … a very spongy cave.

During our weekly drills, we practiced a person-overboard rescue. Several scientists and I were stationed on the flying bridge with the job of being look-outs. The job of a look-out is to locate the person in the water and extend an arm in that direction. The arm stays fixed on whoever fell overboard until they are recovered by the ship’s fast rescue boat. For this exercise, a ball was thrown overboard to simulate a person.

Overall, the weather has been very calm and sunny, and we’re hoping it continues to cooperate for the rest of the trip. Stormy weather conditions can really slow down a survey’s progress, and we have been extremely lucky so far.