You’d think sorting clams on a survey is monotonous, but blogger Christine Kircun finds adventure on every trip. 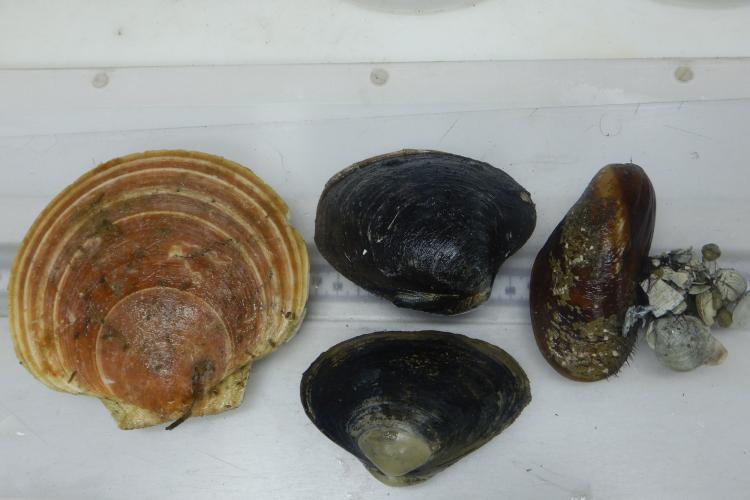 The different kinds of shellfish caught on the clam survey. Clockwise from left: Atlantic sea scallop (Placopecten magellanicus), ocean quahog (Arctica islandica), a mussel, and Atlantic surfclam, Spisula solidissima. You can see the byssal threads (thin hair-like tethers that originate in the muscle that hold the two shells together). on the mussel wrapping around small fragments of shells. Credit: NOAA Fisheries/Christine Kirkun

What’s the difference between Atlantic surfclams and ocean quahogs? I learned that while sailing on the clam survey this summer!

We sailed out of New Bedford, Massachusetts on the F/V ESS Pursuit and headed south to our first sampling station. The overall catches were fairly light, but we consistently found both surfclams and quahogs in the commercial clam dredge.

While their colors may look similar at times, quahog and surfclam shapes are very different. Quahogs have very thick shells, a sharp curve near the umbo (where the two shells connect), and tend to feel more round in your hand. Surfclams are more triangular, and the umbo isn’t as bulbous. We also caught a handful of scallops and blue mussels (or possibly horse mussels) during this trip.

This resource survey focuses on surfclams and ocean quahogs. After the catch from the dredge is dumped in the hopper, it goes over a shaker table where sand and mud is washed off. The deck crew removes any fish, rocks, and shell debris. This leaves only our target species. These then run down a long sorting belt where two people separate the surfclams from the quahogs.

The sorting belt is about 9 feet above the deck, so you have to climb onto a metal platform in order to get to the clams. Working on the sorting belt was my favorite part because you had to climb up a ladder to get there. It was simply fun to climb something while on a moving ship. Not to mention, the ocean view from the platform is fantastic! Sometimes, I’d get up there a little early and just watch the water while waiting for the sorting to begin.

As the deck crew clean out the catch on the shaker table, they may pull aside anything they find interesting. One catch of interest was a plastic water bottle covered in what looks like eggs. We were not sure what kind of eggs, but they were covered with a gelatinous material and were very soft. While the eggs were a neat find, it’s sadly not surprising to find them encrusted on yet another piece of trash. It’s just another reminder of how human activity and nature are so intimately connected, even when we don’t necessarily see it.

We were far enough south to end the first leg in Atlantic City, New Jersey and changed the science crew for the next leg. It was enjoyable to watch the colorful city lights at night from the ship. A view from the water is something I always try to take advantage of when given the chance.

Aboard the F/V ESS Pursuit

Previous: What Makes a Bird a Seabird? Next: Fair Weather Greets the 2021 Bottom Trawl Survey Off Massachusetts

Last updated by Northeast Fisheries Science Center on May 27, 2022