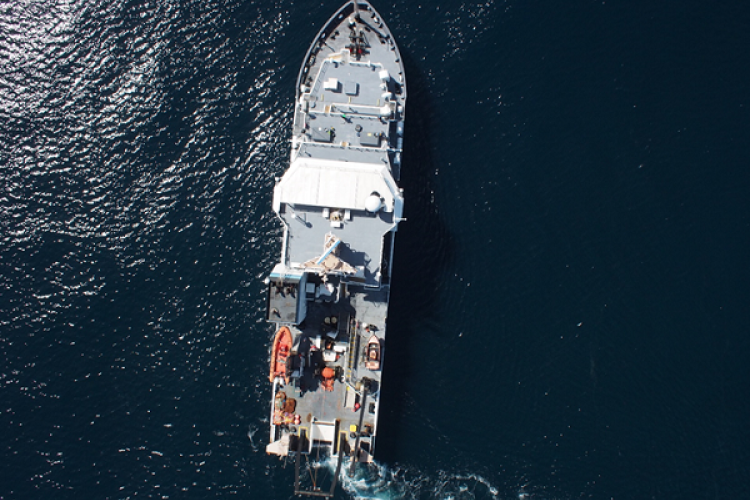 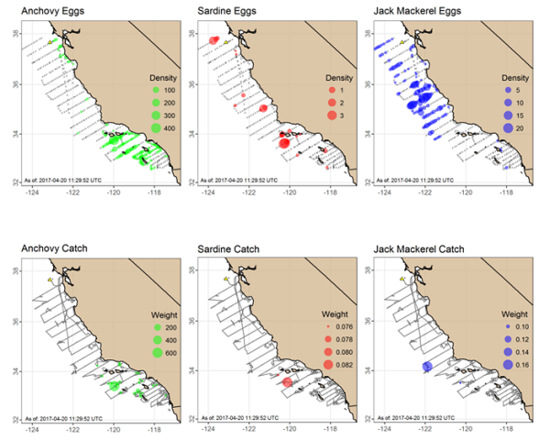 The Spring Coastal Pelagic Species survey is finishing its last transect offshore of San Francisco Bay before tying up and offloading in downtown San Francisco. Catches continue to consist mainly of squid, jack mackerel, and pyrosomes, though the team has encountered high concentrations of sardine eggs as they move inshore on this last line, with possible Coastal Pelagic Species returns in the acoustics as well.

This week, the field trial of nearshore sampling with an aerial drone was successful. The camera-equipped APH-22 hexacopter was flown from the ship; and from Lasker’s small boat, along a shoreward extension of a survey transect. Data from the latter flight will be used to evaluate the potential of this aerial drone to image Coastal Pelagic Species schools that are closer to shore than the ship can survey. 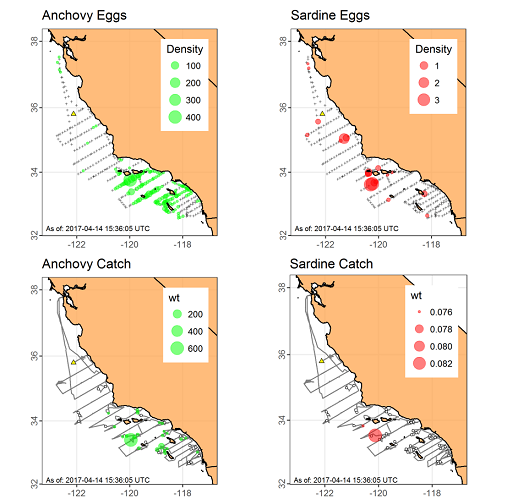 The second leg of the Spring Coastal Pelagic Species Survey is underway on FSV Reuben Lasker, and acoustic and aerial observations are being conducted. The ship left San Francisco Tuesday morning and steamed for the duration of the day, arrived on station early the next morning, and conducted two trawls before sunrise. As of April 14, two and a half 80-nmi transects have been completed.

This leg, trawl catches have been dominated by market squid, jack mackerel, and pyrosomes; and CUFES samples have included a small number of eggs. Coastal Pelagic Species schools have begun appearing in the echograms along the latest transect.

On Friday 14 April, sustained 35 kt winds and a 2-3 m sea precluded planned trawls, side-station sampling, underway CTD casts, and the first deployment of the APH-22 hexacopter. However, acoustic sampling continues using the EK60 multi-frequency echosounder, the new EK80 wide-bandwidth echosounder, the ME70 multibeam echosounder, the MS70 imaging sonar, and the SX90 long-range scanning sonar. The weather is forecast to improve within the next couple of days.

The NOAA ship Reuben Lasker just completed its last acoustic transect of Leg 1 off Pt. Buchon, between Avila Beach and Morro Bay, CA, and is en route to Pier 15/17 and the Exploratorium in San Francisco. Little or no sign of Coastal Pelagic Species has been observed in CUFES, trawls, or acoustics, except for a few CUFES samples that contained sardine eggs along the last transect (see below). The trawls during the last few evenings have been dominated by pyrosomes with little else present. 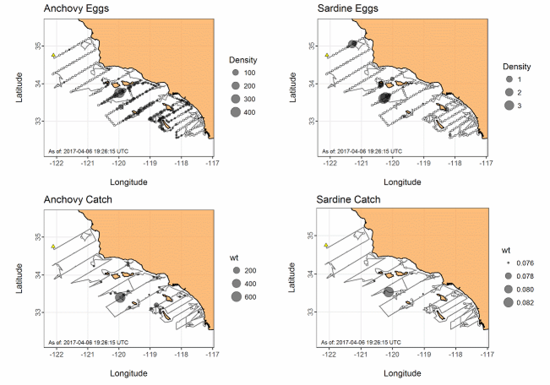 The weather has been remarkably pleasant around Pt. Conception, but we’re expected to encounter heavy seas during the transit north. The Lasker will resume the Leg 2 of the survey on Tuesday, April 11, and run until April 22. A note about these data and plots: These plots have undergone some changes throughout the survey. Initially, egg counts were in eggs/min, but have been recently updated to eggs/m^3. Also, anchovy and sardine eggs were placed on separate axes due to vast differences in density between the species.

Finally, the max density of 417 anchovy eggs/m^3, south of Santa Rosa Island was more than twice the max (just under 200) of any Coastal Pelagic Species egg samples collected since the 1990s. 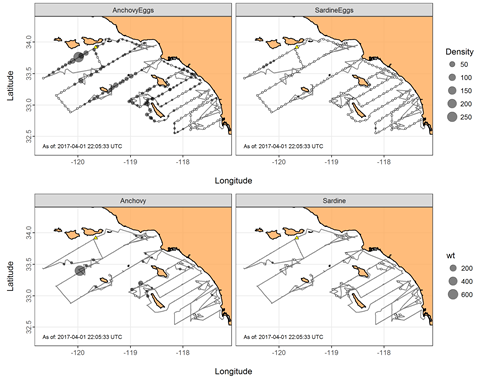 Last evening, at least one of each Coastal Pelagic Species species of interest were collected (Pacific sardine, anchovy, Pacific mackerel, jack mackerel, and market squid) in the offshore area between transects 5 and 6. After a bumpy night with little sleep, seas are calm in the lee of the Channel Islands and the forecast appears to be pleasant for the remainder of Leg 1. Following a brief stop at Channel Islands Harbor this evening to collect a new crew member, the vessel will transit north to survey transect 7 off Carpinteria and keep working towards San Francisco. At this rate, researchers anticipate surveying to approximately Avila Beach or Morro Bay before the mid-survey in-port.

On 21 March, Fisheries Resources Division scientists departed the 10th Avenue Marine Terminal to begin the 2017 Spring Coastal Pelagic Species survey aboard the NOAA ship Reuben Lasker. The survey began along the U.S.-Mexico border and is progressing northward. To date, nearly three acoustic transects have been completed extending as far north as Oceanside, CA. Some putative anchovy were observed by the echosounders and anchovy eggs were present nearshore off Oceanside, but trawling in the area wasn’t possible given the presence of dolphins around the vessel. Trawl samples have contained mostly market squid (Doryteuthis opalescens). Navy training exercises have restricted the westward extent of the acoustic transects near San Clemente Island and weather has recently degraded.