What’s in a Name? Choosing Names for New Fish Species from the Mariana Archipelago

Local students submitted names from their native Chamorro language for three species of snailfish previously undescribed in the scientific literature. 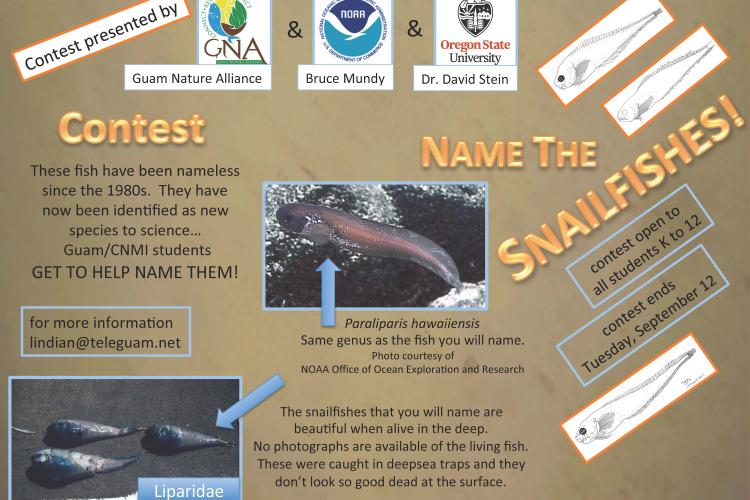 How do you choose appropriate names for new species from Pacific islands?

The Pacific Islands Fisheries Science Center collects many unusual organisms while doing research of the region’s ocean resources. Sometimes those specimens include species previously unknown to science. The center has a long history of finding and describing new species. A recent example is the description of three snailfish species from the Mariana Archipelago, published in the Journal of Ichthyological Research. Now-retired PIFSC scientists Robert Moffitt, Jeffrey Polovina, and other biologists collected and archived the snails in the 1980s during exploratory research on deep-water shrimp populations.  The fact that only now have they been able to describe these species illustrates the value of keeping specimens, especially those from poorly-known areas like deep waters of the Pacific.

In recent years, scientists have begun a movement to name newly discovered species using the language of the indigenous people in the area where the species are found, connecting taxonomy to the native culture. Scientists have traditionally named new species using Greek or Latin words, the names of people who collected the specimens, or the names of other scientists to honor them. These practices imposed Euro-American names on species worldwide, a practice that is regarded by some to be a colonialist or imperialist legacy.

Dr. David Stein and I described these new species of snails. Dr. Stein is a research associate at Oregon State University’s College of Agricultural Sciences. The research began while I was employed by the Pacific Islands Fisheries Science Center in Honolulu. Dr. Stein is a world authority on snailfishes (family Liparidae), having described more than100 new species. I became aware of the specimens when Robert Moffitt told me of their existence. David came to Hawaiʽi to assist university scientists with the description of another snailfish species from the depths of the Mariana Trench. He also visited our lab to examine our snailfish specimens. To our surprise, he found that the species were not only undescribed, but that three distinct species were included in the material.

In describing the three new species from the Mariana Archipelago, we decided that it would be appropriate to form names from the Chamorro language of the islands’ indigenous people. To find Chamorro names, we contacted Linda Tatreau, an educator in Guam. She is an advisor for Marine Mania 4H Club, a group of students from various Guam schools who learn about the marine environment and ways to protect it.

Linda challenged students to name the new species in one of Marine Mania’s annual academic contests, FishBowl. We described to the students important characteristics that distinguish the new species from related ones. They suggested several names. We selected two: kadadakaleguak (“short rib bone”) suggested by Alyssa Roces, then a student at Okkodo High School, and echongpachot ("crooked mouth") suggested by Aydan Charfauros, then at Tamuning Elementary School. Other participating students were from George Washington High School, Agana Heights Elementary School, and F.B. Leon Guerrero Middle School. The third species is named “marianae” after the archipelago in which it is found.

Snailfish are one of the most widely distributed types of fish. They live in habitats from tide pools in the North Pacific, including Oregon, to the deepest trenches of the ocean. They are most abundant and diverse in temperate and polar regions of the world, and found less often in subtropical and tropical areas. One snailfish species holds the record as the deepest fish scientists have observed. These cold-water fishes occur worldwide in waters of suitable temperatures. In the tropics, those temperatures only occur at bathyal and greater depths, which are poorly sampled. Scientists have very few records of snailfishes from islands in the tropical and subtropical Pacific Ocean. The new species described in this study are very rare and all three species are known only from the Mariana Archipelago. Only 18 snailfishes were caught in 2,745 shrimp trap sets.

The new species are deep-water fishes known from 2,963 to 3,960 feet (903 to 1,207 meters), a depth range that is poorly explored in the Mariana Archipelago. A lot is known about shallow-water marine habitats of the Marianas that are accessible to divers. Researchers have explored the deeper parts of the Mariana Trench because of its fame as the deepest part of the ocean. In the Mariana Islands, snailfish were previously best known from observations and collections of species in the trench at depths of 3.85–5.06 miles (6,198–8,145 meters). Much less is known about the deep-water habitats of the Marianas between the shallows and the deep trench.

This study illustrates the importance of NOAA’s exploratory work and the value of its collections. These samples increase our understanding of biodiversity in the U.S. Pacific. The names of these species also illustrate the significance of linking NOAA's discoveries to the communities in which they are made. We hope that engaging students in the selection of names for the new species will help increase future generations' interest in ocean science. 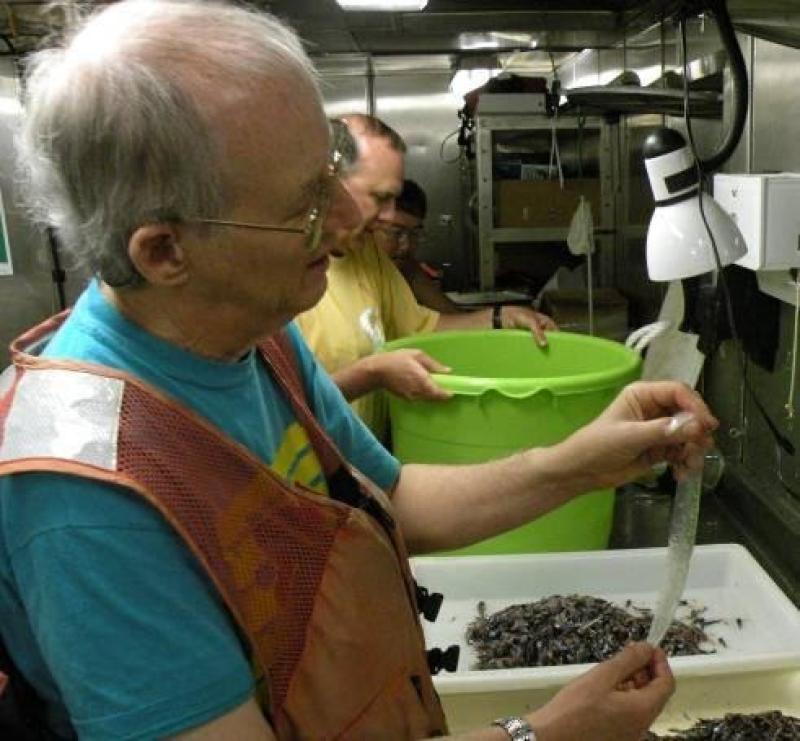 Bruce Mundy is an ichthyologist and fishery biologist who worked for NOAA Fisheries in Honolulu for 33 years before retiring in early 2019. His work included, among other things, studies of larval fish distributions, larval fish identifications, coral reef fish distributions at remote Pacific Islands, and the distribution of deep-sea fishes. He was the scientific editor of the NOAA NMFS publication Fishery Bulletin in 2011-2014. In 2015-2017, he participated by telepresence in deep-sea survey...

Getting Transparent About Sustainable Fishing and Seafood Marketing in Hawaiʻi 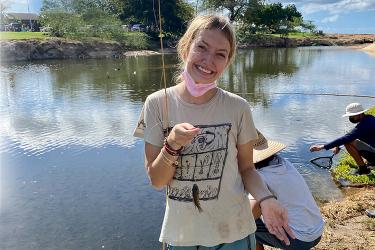 Prior to being a Hollings Preparation Program intern, I worked on native wetland restoration at the Nānākuli Muliwai. Photo courtesy of Andie Le Doux
Science Blog 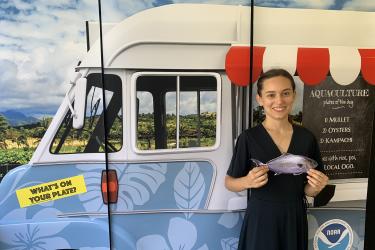 During my internship, I supported an outreach event to share information about careers at NOAA and aquaculture. Here you can see me at NOAA’s aquaculture photo booth with a cardboard kampachi, a fish grown on Hawai‘i Island. This event helped families learn about different types of aquaculture in the Pacific Islands region. Credit: NOAA Fisheries/Celeste Hanley
Science Blog