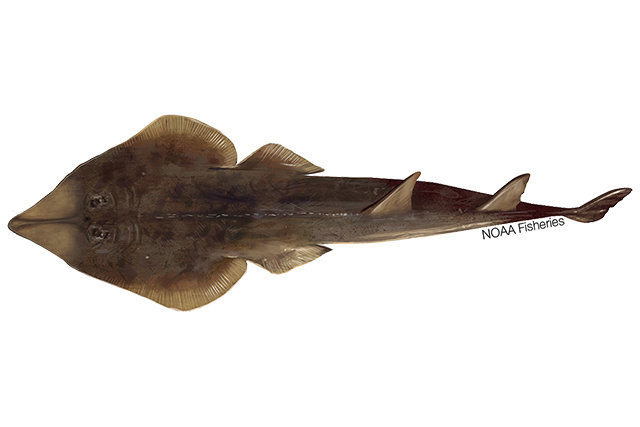 Weight
Unknown
Lifespan
Up to 28 years for females and 15 years for males
Length
Up to 4.5 feet
Threats
Overfishing
Region
Foreign
See Regulatory Actions

The Brazilian guitarfish is a cartilaginous fish, similar to skates and rays. The species once commonly occurred off the coast of southern Brazil, but due to significant fishing pressure, particularly on pregnant females, the species experienced a significant decline and population collapse in 1986. The main threat to the Brazilian guitarfish is overfishing and bycatch in various commercial and artisanal fisheries operating in its coastal inshore habitat. In 2017, NOAA Fisheries listed the species as endangered under the Endangered Species Act.

The Brazilian guitarfish is olive grey or chocolate brown in color and lacks light or dark markings. It has long nostrils and a “sooty” patch on its snout, with a transversely flat or a slightly convex crown. The species also has a row of large, thorn-like nodules running down the middle of its back. The dorsal fins are triangular and similar in size.

There is very little information on the diet or feeding behavior of Brazilian guitarfish. Based on one study from Argentina, the species likely eats Patagonian octopus (Octopus tehuelchus), shrimp (Hymenopeneus muelleri), decapods, isopods, and polychaetes.

Although the Brazilian guitarfish occurs in the southwestern Atlantic from Bahia, Brazil to Mar del Plata, Argentina, the species’ center of distribution and abundance is concentrated between 28° S and 34° S in southern Brazil, and is elsewhere rare. Adult Brazilian guitarfish live in shallow, coastal waters between November and March when pupping and mating occur, and move offshore for the rest of the year in waters of 130 feet depth. Newborns and juveniles live in shallow coastal waters of less than 66 feet depth year round.

The primary threat to the Brazilian guitarfish shark is overfishing in commercial and artisanal fisheries. The species is caught as bycatch in commercial trawl fisheries as well as artisanal beach seines and fixed nets. These fisheries operate throughout the species’ habitat year-round, including its nursery grounds where large numbers of pregnant females are caught.

In 2013, NOAA Fisheries received a petition (PDF, 538 pages) to list the Brazilian guitarfish as threatened or endangered under the Endangered Species Act. In our 90-day finding, we concluded that the petitioned action may be warranted. After completing a Status Review, we proposed to list the species as endangered and requested comments from the public. In 2017, NOAA Fisheries listed the Brazilian guitarfish as endangered under the Endangered Species Act.