NOAA Fisheries has worked with the U.S. Army Corps of Engineers and the Bonneville Power Administration to improve fish passage

Fish (e.g., salmon, steelhead, eulachon, sturgeon) migrating through the Columbia and Snake rivers must pass up to eight Federal dams. NOAA Fisheries has worked with the U.S. Army Corps of Engineers and the Bonneville Power Administration to improve fish passage through each dam. Juvenile fish passage systems and enhanced operations have provided significant improvements for fish survival in recent years. The illustration below identifies specific passage improvements. 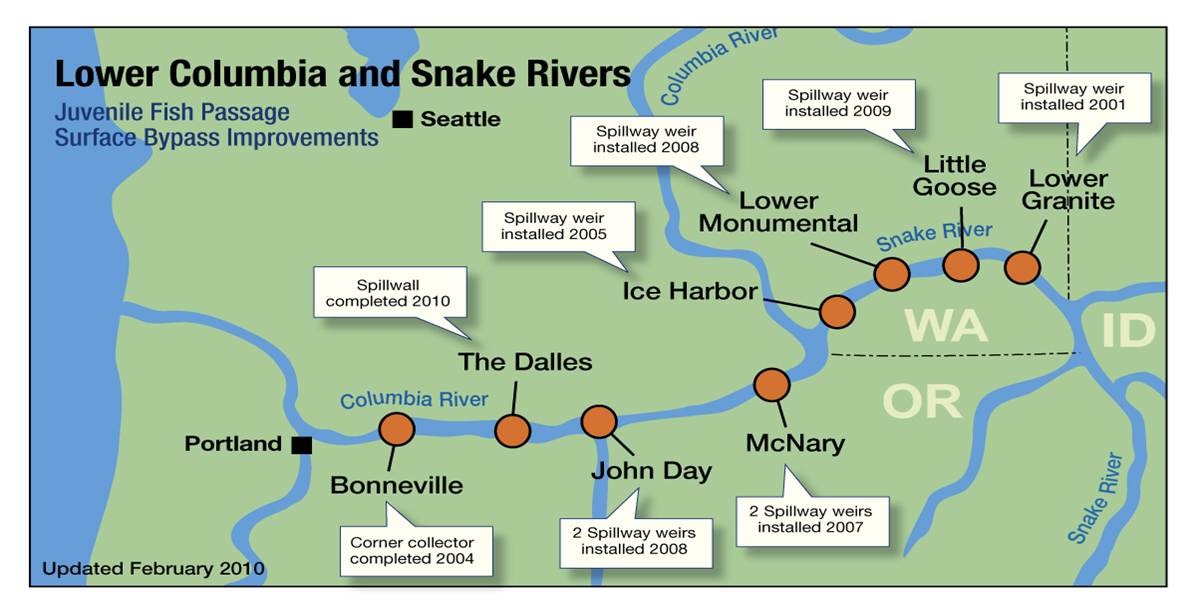 The FCRPS Action Agencies (Army Corps of Engineers, Bonneville Power Administration, and the Bureau of Reclamation) release (or spill) water over the Federal dams in the spring and summer to help juvenile salmon and steelhead migrate safely to the ocean. With spill, these fish go past the dams in water that flows through spillway openings, rather than traveling through turbines.

The effectiveness of spill to increase fish survival varies and depends on the configuration at each dam. While spill is effective, by itself it is not a simple or immediate solution to the issue of fish passage. For example, too much spill can create back-eddies where fish get trapped and become easy prey to predators. Too much spill can also cause gas bubble disease.

Each year, the U.S. Army Corps of Engineers (Corps) prepares Fish Operations Plans describing operations at each of the eight dams for safe fish passage. During the migration season, state and tribal fish managers work together with the Corps to manage real-time operations decisions for listed fish species.