The operation of the Federal Columbia River Power System (FCRPS) affects eulachon and the following 13 species of Columbia River Basin salmon and steelhead listed for protection under the Endangered Species Act (ESA).

The operation of the Federal Columbia River Power System (FCRPS) affects eulachon and the following 13 species of Columbia River Basin salmon and steelhead listed for protection under the Endangered Species Act (ESA).

The ESA requires the agencies that operate the FCRPS (FCRPS Action Agencies) to ensure that their actions are not likely to jeopardize the continued existence of a listed species, nor result in the destruction or adverse modification of designated critical habitat.

The actions in the FCRPS Biological Opinion are, in general, a 10-year operations and configuration plan for the FCRPS facilities, as well as the mainstem effects for various other hydro projects on Columbia River tributaries operated for irrigation purposes. The FCRPS Biological Opinion sets performance standards of 96 percent average per-dam survival for spring migrants and 93 percent for summer migrating fish. Additional actions includes habitat, hatchery, predation management, and harvest actions to mitigate for the adverse effects of the hydrosystem, as well as numerous research, monitoring, and evaluation actions to support and inform adaptive management decisions.

Regional state and tribal entities oversee the implementation of the FCRPS Biological Opinion through the Regional Oversight Implementation Group, consisting of senior policy representatives from federal agencies, the States, and tribes.

Letters of Authorization for Research

For a project to be eligible for a letter of authorization, it must meet the following requirements:

We also recommend that the proposed research be reviewed by a regional fisheries review panel, such as the Independent Scientific Review Panel and Studies Review Work Group. 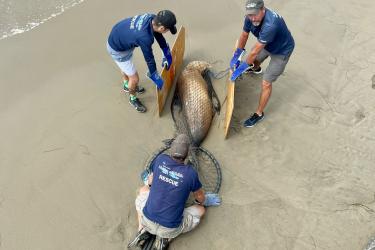