Congress established the Pacific Coastal Salmon Recovery Fund (PCSRF) to reverse the decline of West Coast salmon and steelhead. This competitive grants program provides funding to states and tribes to protect, conserve, and restore these populations. 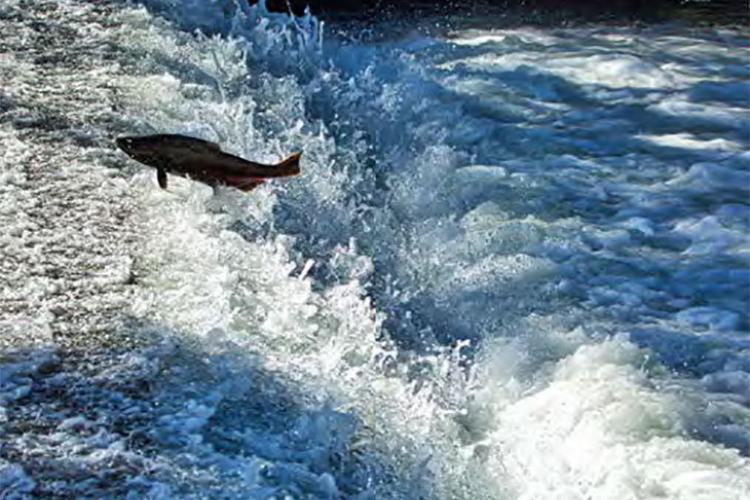 Pacific salmon and steelhead are much more than essential elements of a healthy Pacific Coast ecosystem. They are cultural icons woven into the fabric of local communities and economies. Salmon runs tie the region's people to the landscape, but pressures from a changing environment and human activities have compromised the strength of these runs.

The Pacific Coastal Salmon Recovery Fund (PCSRF) was established by Congress in 2000 to reverse the declines of Pacific salmon and steelhead. The program supports conservation efforts in California, Oregon, Washington, Idaho, and Alaska. It is essential to preventing the extinction of the 28 listed salmon and steelhead species on the West Coast. In many cases, has stabilized the populations and contributed to their recovery course.

Guiding Restoration Through Science and Collaboration

PCSRF has catalyzed the development of a vibrant community of salmon restoration experts. It has fostered indispensable partnerships among landowners, local governments, and state, tribal, and federal agencies. PCSRF restoration efforts have a collaborative nature and strong scientific foundation. This ensures that funds effectively and efficiently benefit salmon populations and their habitats.

NOAA Fisheries administers PCSRF's competitive grants process. As of October 2019, we have awarded states and tribes a total of more than $1.4 billion. The program has also leveraged nearly $1.7 billion in other non-PCSRF contributions. These investments have significant impacts on local economies and support local job development.

Learn more about the grant process

Salmon restoration benefits fish populations and their habitats. The value of these investments goes far beyond recovering threatened and endangered species. The financial investments in habitat restoration contribute to local communities and their economies.

PCSRF grantees contract with local watershed groups, conservation agencies, land trusts, and other entities to manage habitat restoration projects. In turn, those agencies contract with local businesses and suppliers to carry out the work. These partners contribute funding on top of PCSRF dollars. This cost-sharing model increases the economic benefits realized in local communities.

The jobs and economic benefits of salmon restoration activities are largely realized in the local and rural communities. The vast majority of habitat restoration investments are spent in the state in which the project sponsor is located (approximately 90 percent). In non-metropolitan counties, more than 60 percent is spent within the county. These economic benefits are often localized and provide important stability to economically distressed communities. In Oregon alone, habitat restoration projects generated as many as 6,400 jobs and more than $977 million between 2001 and 2010.

Several studies indicate that a $1 million investment in watershed restoration creates between 13 and 32 jobs and $2.2 and $3.4 million in economic activity.

With PCSRF funding and the jobs that it creates, states and tribes have undertaken more than 13,700 projects. This has resulted in significant changes in salmon habitat conditions and availability. As of October 2019, access to nearly 1.1 million acres of spawning and rearing habitat has been restored and protected for salmon. Access to more than 10,900 miles of previously inaccessible streams has been re-established.