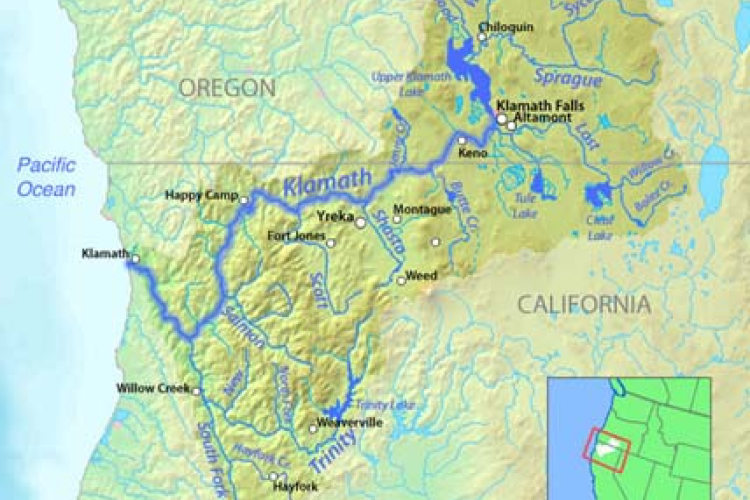 The Klamath River runs through southern Oregon and northern California and drains a basin encompassing 12,000 square miles. The headwaters of the Klamath River originate in Oregon and flow through the Cascade Mountain Range to the Pacific Ocean south of Crescent City, California, totaling approximately 263 miles in length. The Klamath Basin has long been celebrated for its lakes, streams, forests, hunting, fishing, and agriculture. The Klamath River was once the third largest salmon-producing river on the West Coast. It was the life force of the Native Americans who relied on it for its generous abundance of salmon and trout. The name “Klamath” was derived from the Indian word “Tlamatl” which means “swiftness” in the Chinook language.

The Klamath River has been referred to as the “upside down river” because of its geography. Typical rivers originate high in the mountains, with steep gradients and are relatively undeveloped until they reach valleys where gradients are lower, temperatures are warmer, and there is an increased level of urbanization. The Klamath River, however, originates in the arid deserts of eastern Oregon, which contain a considerable amount of urbanization and agriculture. Low gradients and large reservoirs are present in the upstream reaches of the Klamath watershed. Conversely, the lower reaches of the river run through the temperate rainforests of California and remain relatively undisturbed with mostly tribal and federal land ownership.

The Reclamation Act of 1902 (43 U.S.C. 391 et seq.) authorized the Secretary of the Interior to locate, construct, operate, and maintain works for the storage, diversion, and development of water for the reclamation of arid and semiarid lands in the western States. The Klamath Project currently includes several mainstem dams used for irrigation and flood control in the upper Klamath Basin.

Learn more about Water Management in the Klamath River Basin

The construction of PacifiCorp’s hydroelectric dams on the Klamath River contributed in part to the decline in salmon and steelhead abundance, fishing opportunity, and water quality throughout the Klamath Basin. These detrimental impacts led to uncertainties in PacifiCorp’s ability to meet long term regulatory compliance standards. Ultimately, willing stakeholders in the Klamath Basin came to an agreement, called the Klamath Hydroelectric Settlement Agreement (KHSA). Part of this agreement includes the removal of four mainstem dams - Iron Gate, Copco 1, Copco 2, and JC Boyle.

Learn more about Hydroelectric Management in the Klamath River Basin

Learn more about NOAA Fisheries Restoration in the Klamath Basin

In the Klamath Basin, a large portion of the habitat for coho salmon is found on private lands such as those owned by timber companies, ranchers, and farmers. Therefore, partnerships between NOAA Fisheries and landowners are critical for the survival and recovery of the species. NOAA Fisheries offers tools, such as Habitat Conservation Plans (HCPs) and Safe Harbor Agreements (SHAs) under the Endangered Species Act, to provide landowners regulatory assurances for restoring and improving habitat for protected fish on private property.