We conduct research on loggerhead turtles, an infrequent visitor to Southern California 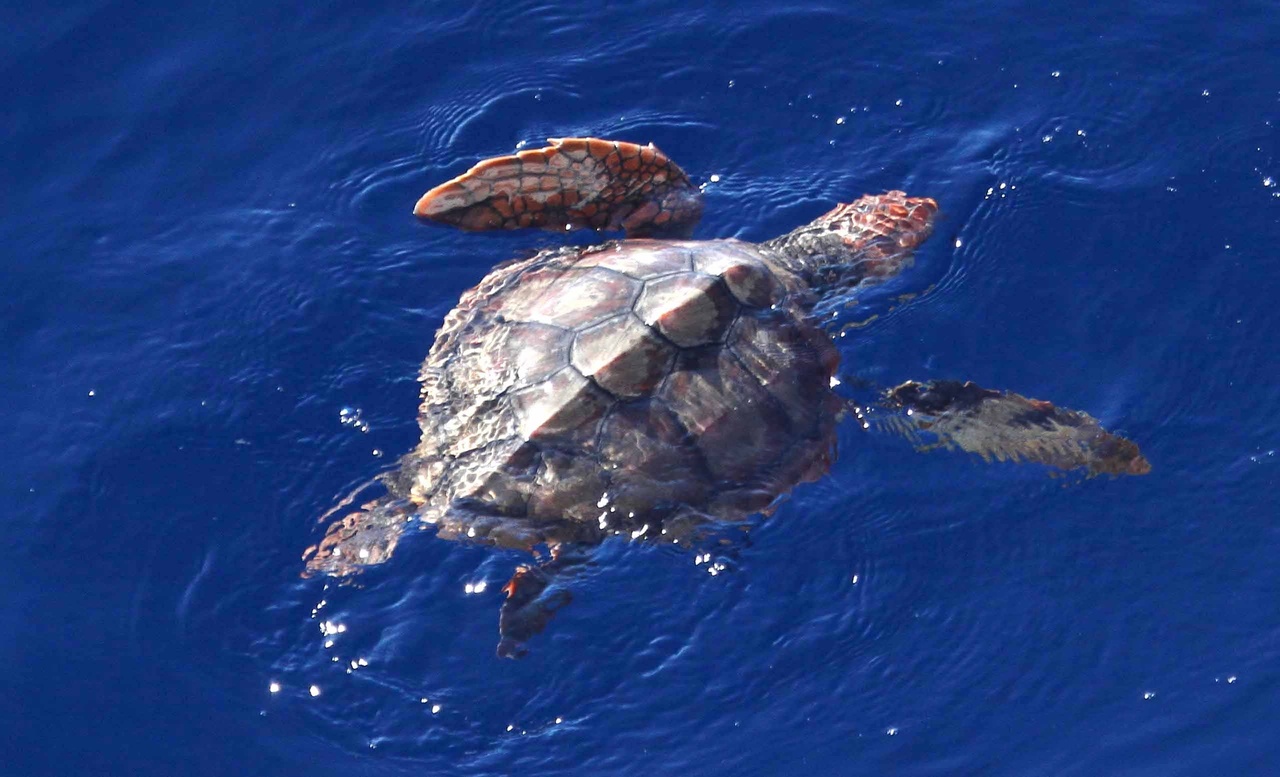 Off the coast of Southern California, loggerhead turtles are present during anomalously warm periods. These loggerheads are part of the North Pacific population, which originates from nesting beaches in Japan. Hatchlings drift/swim across the Pacific Ocean and some will reach the eastern edge of the North Pacific, specifically along the central Pacific coast of the Baja California peninsula, Mexico, where these turtles spend decades until they mature. Loggerheads are also found off southern California, but their presence is more ephemeral. Our researchers have conducted aerial surveys to estimate abundance through line-transect analysis. During September and October 2011 we flew 3650 km and found no turtles. During the same time period in 2015, we flew 5000 km and found more than 200 loggerheads. We estimated over 15,000 loggerheads in the area in 2015. We also deployed satellite transmitters on loggerheads caught off southern California. Reports from the public over the years have enhanced our knowledge of spatial and temporal patterns of loggerhead presence in our waters, and we look forward to studying this species locally, whenever they are present. In August 2018, we flew a third aerial survey off of southern California, but only two loggerheads were spotted over more than 1,000 km of trackline. Although this was not surprising considering the relatively normal offshore water temperatures, we suspect that as mean water temperatures continue to increase in future decades we will see loggerheads become a more regular visitor to our region.

With loggerhead presence in our offshore waters a natural focus is to try and limit their interactions with commercial fisheries efforts.  For example, an observed correlation between bycatch of loggerheads in the California-based drift gillnet fishery and the presence of El Niño conditions led NOAA Fisheries to develop a time-limited spatial closure of the CADGN fishery off southern California in 2003. The closure, which is implemented between 1 June and 31 August, is triggered when the agency officially declares or predicts El Niño conditions in any given year. This closure has been implemented in 2014, 2015, and 2016.  With proactive fisheries management efforts like this and others, we expect that human threats to loggerheads in our region will be reduced.

To learn more about the age, growth, and long-term habitat use patterns of turtles in the eastern Pacific, specifically off the coast of the Baja California peninsula, Mexico, Marine Turtle Ecology and Assessment researchers applied a combination of skeletochronology and stable isotope analysis to the bones collected from dead-stranded turtles. Ongoing international efforts are working to reduce the number of loggerhead interactions with the small-scale fisheries off the coast of BCP, and the use of the samples from the dead animals are helping to inform management and protect future generations of loggerheads.

You Too Can Help!

With more eyes and cellphones on the water we can expand our ability to learn about loggerhead turtles in southern California, and you can help in this effort! If you see a loggerhead or any other species of sea turtle, please report your sighting to swfsc.turtle-sightings@noaa.gov.  Any information you can provide is appreciated.  We especially like to receive photos and supporting information such as location (latitude and longitude would be best but any major landmarks are also good), species (if possible), date and time, and behavior.