The oceanography of the Northern California Current regional ecosystem.

NOAA Fisheries is responsible for the stewardship of the nation's ocean resources and their habitat including those that are a part of the California Current System. Here in the Pacific Northwest, the marine and anadramous animals we study occupy key habitats, including:

These habitats have unique physical conditions that affect spawning and larval transport, leading to species-specific growth, survival, and recruitment variations. Many species have pelagic larvae/juvenile stages. Their recruitment is affected by broad-scale variation in ocean circulation—which involves the transport of eggs and larvae—and ocean productivity, which affects the feeding environment of larval and juvenile fish.

The California Current system is a broad, slow, meandering current. It flows south from the northern tip of Vancouver Island (50°N) to Punta Eugenia near central Baja, California (27°N), extending laterally several hundred miles offshore (Figure INT-01) into deep oceanic waters off the continental shelf. Over the continental shelf, flows are typically southward in spring, summer, and fall but reverse to northward during the winter (known as the Davidson Current).

The transitions between northward and southward flow over the shelf occur during March/April (“spring transition”) and October/November (“fall transition”). Another important circulation feature within the California Current system is the 100–300 m deep, northward flowing California Undercurrent found year-round over the outer shelf and slope. This current seems to be continuous from Southern California (33°N) to the British Columbia coast (50°N). 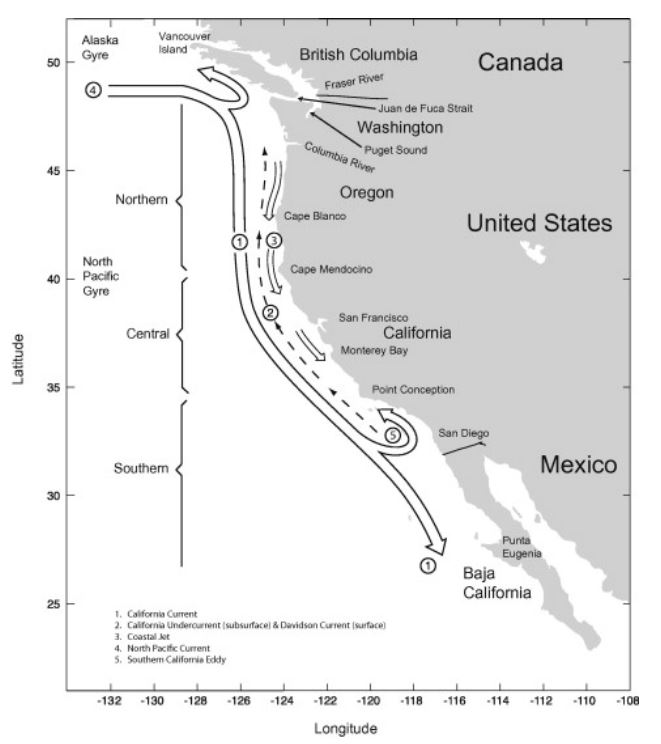 Figure INT-01. Map of the California Current System. Major regions, currents, and geographic features are shown. The California Current derives from both the North Pacific Current, to the North, and the coastal jet, to the east. Credit: From Checkley and Barth, 2009. https://doi.org/10.1016/j.pocean.2009.07.028)

Coastal upwelling is the dominant physical forcing affecting production in the California Current System. Strong, northerly winds that blow from April to September drive upwelling along the Oregon and Washington coasts.

Upwelling can occur year-round off the northern and central California coast. The winds transport surface waters (upper 15 m) offshore, which are replaced by the upwelling of deep (100-125 m), cold (8°C), and nutrient-rich waters from the shelf break region (Figure CU-01).

The upwelled water fuels high phytoplankton production and subsequent high biomass of copepods, euphausiids, and other zooplankton during the summer.

Though there are seasonal trends, coastal upwelling is not a continuous process. It is broken into episodic upwelling events. Upwelling favorable winds (equatorward) generally blow for 1-2 week periods interspersed by periods of weak winds or reversals in wind direction that lead to relaxation events (Austin and Barth 2002). A positive correlation has been found between the duration and number of upwelling events and the volume of primary and secondary production, indicating production is dependent on local winds (Small and Menzies 1981).

The same upwelled waters that fuel high plankton productivity can also advect the plankton (particularly zooplankton and juvenile/larval fishes) offshore into relatively oligotrophic waters. Bakun (1996) argues that for an animal to be successful in upwelling environments, adults must locate enriched habitats with some mechanism for retaining larvae within the system and concentrating food for larvae.

Offshore transport may be why many species do not spawn during the upwelling season or in an active upwelling region.

For example, Dover sole, sablefish, Dungeness crab, and pink shrimp all spawn during the winter months before the onset of upwelling. Alternatively, other species perform an extended migration to spawn outside active upwelling regions, like Hake. They travel from Vancouver Island (49°N) to the South California Bight (35°N) to spawn in the autumn and winter. To migrate back north, adults (like Hake) and their juveniles and larvae ride the deep, poleward California Undercurrent (Figure INT-01).

Other species, such as English sole, spawn in bays or estuaries where advective losses are minimized. Salmonids and eulachon smelt spawn in rivers, completely outside the upwelling system. Some species, such as rockfish, simply bypass the egg and larval stages by giving birth to live precocious "juvenile" individuals.

California Current productivity varies on climatic time scales. We take this timeframe into account when considering variability in fish recruitment and growth.

For example, the North Pacific Ocean experiences dramatic shifts in climate every 10–20 years, indexed by the Pacific Decadal Oscillation (PDO; Mantua and Hare 2002). The location of the Aleutian Low shifts (eastward or westward) in the winter—affecting wind strength and direction—leading to alternating states of either a warm, less-productive phase, or a more-productive, cool phase.

Due to time lags in the ecosystem response to phase changes of the PDO, the simple relationships summarized in Table CPV-01 only hold during years of persistent recurrence of one phase or another.

Table CPV-01. Summary of how the sign of the PDO influences broad-scale and local physical ocean condition indicators and biological indicators.

Climate and sea surface temperatures off the Oregon and Washington coast are also influenced by changes in climate at the equator, described as the El Niño Southern Oscillation (ENSO; El Niño = warm, La Niña = cool). Temperature signals from equatorial waters can travel through the ocean via Kelvin waves, propagating up the coast of North America into Oregon’s and Washington’s coastal waters.

ENSO signals from the equator can also be transmitted to the Gulf of Alaska via atmospheric teleconnections. For example, El Niño conditions can strengthen the Aleutian Low pressure system, resulting in more frequent and larger local winter storms and a disruption to local spring and summer upwelling winds. A summary of these interactions is available from NOAA's Earth Systems Research Laboratory.

From 1992 to 1998, the Oregon and Washington coasts experienced almost continuous El Niño-like conditions during the summer (i.e., reduced upwelling and warmer ocean conditions).

Since 1998, ocean conditions have improved markedly, and another regime shift may have been initiated in late 1998. However, this shift to productive conditions was interrupted for three years (late 2002-late 2005) and again during the large marine heatwave in the NE Pacific from 2013 to 2016. Whether or not short-term (3-5 year) variability will become the norm remains to be seen

Back to Ocean Ecosystem Indicators of Pacific Salmon on the West Coast.