While 2018 was fairly neutral, our 2019 indicators ranked on the warmer side. We found this true especially for the basin-scale indices (PDO, ONI), the local temperature metrics, and the winter ichthyoplankton metrics.

Many of the biological variables were neutral. However, the May-Sept northern copepod anomalies were much higher than normal, ranking second highest in our time series.

The high abundance of northern copepods is usually an indicator of good feeding conditions in the Northern California Current. However, most of 2019’s other indicators point to a more neutral and/or poor year for outmigrating juvenile salmon.

The PDO turned positive (warm phase) in January 2014 and has remained positive through September of 2019. The PDO value in October 2019 was -0.45, was the first negative value since 2013, but then returned to positive (0.15) in November of 2019. Weak El Niño conditions (positive Ocean Niño Index values greater than or equal to -0.5) persisted during the fall/winter of 2018/2019 from October through April and then became neutral throughout 2019.

The winter downwelling period was close to the climatological mean. The onset of upwelling occurred on April 19, 2019, and was relatively strong at the beginning of the season but decreased mid-June and remained weaker than normal. Weak upwelling favorable winds continued through November, which is rare but also occurred in 2013. 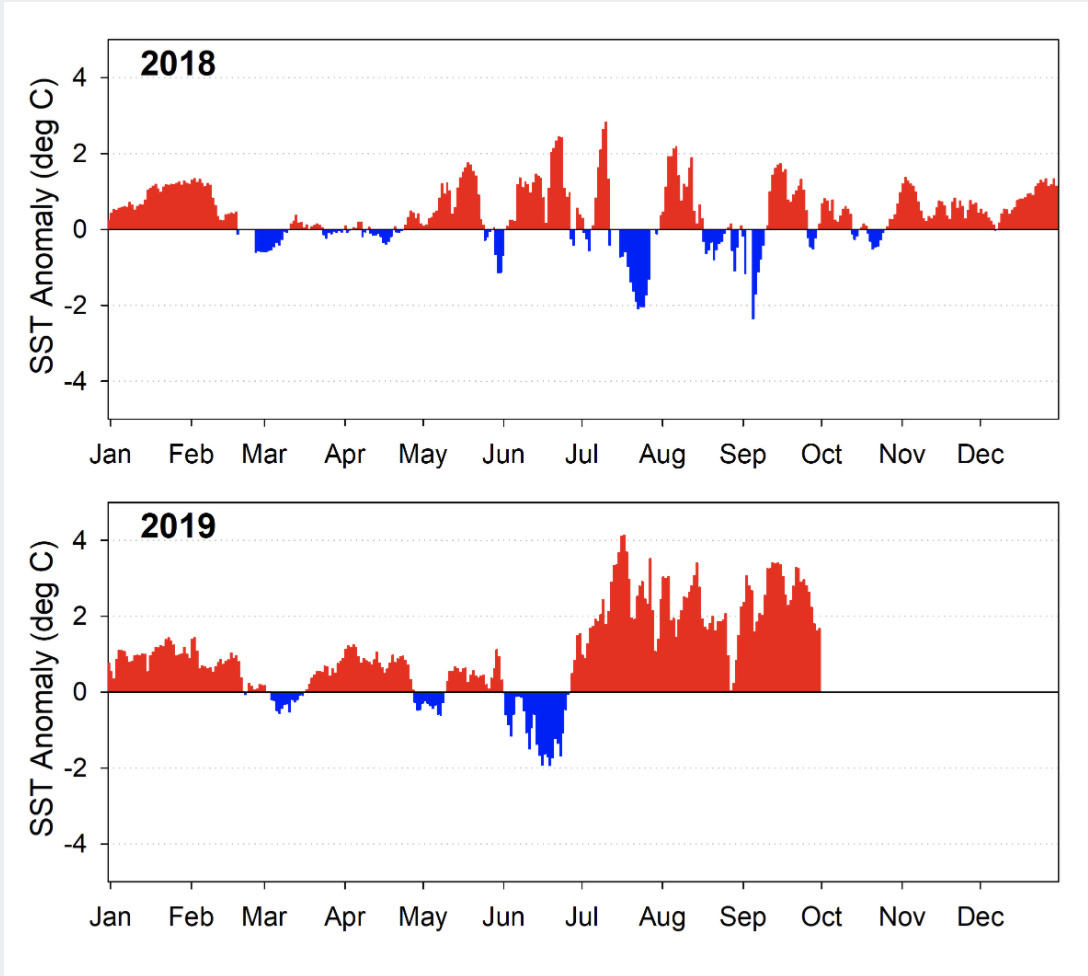 Hypoxic oxygen concentrations below 1.4 ml/L were observed on the shelf off Newport, OR only in August of 2019 (Figure 2). However, we found hypoxic conditions further north from Grays Harbor, WA to Cape Meares, OR during late June, and the area of hypoxia was 6th out of the 13 years, so about average (Figures 3 & 4). 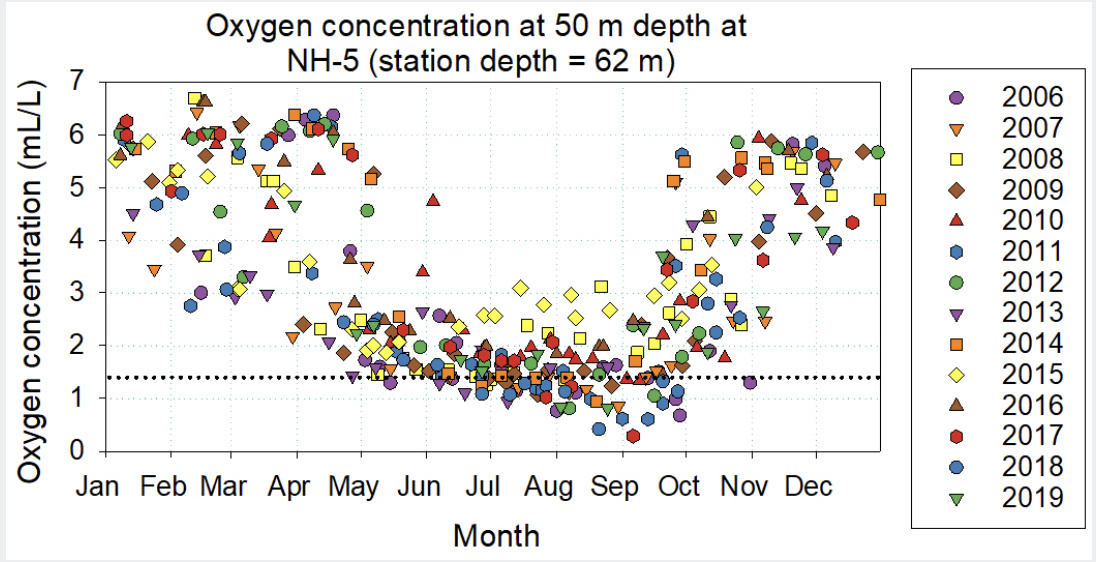 Figure 2.  Oxygen concentration in bottom waters at a baseline station NH 05. Hypoxia is defined as waters with oxygen concentrations <1.4 ml/L, and is observed only during the coastal upwelling season, especially during Jun-Sep. Credit: NOAA Fisheries 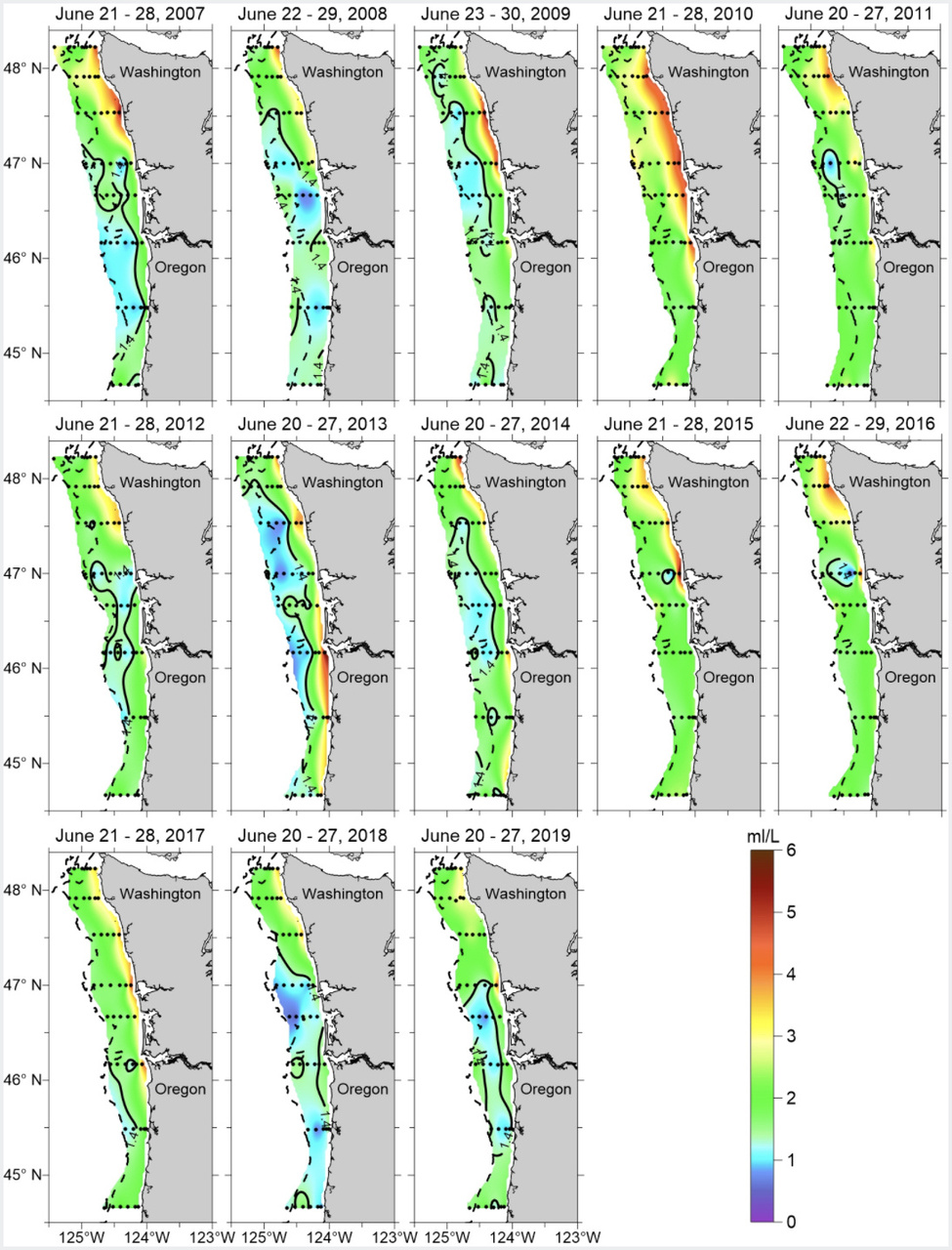 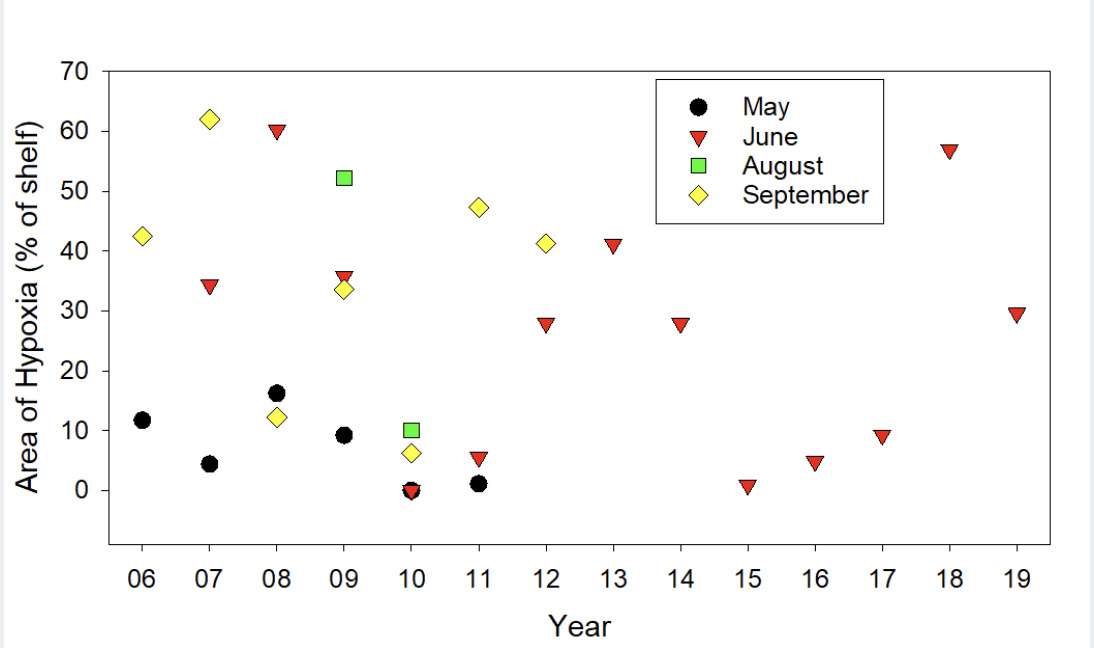 Figure 4. The area of the shelf containing hypoxic bottom waters during the May, June, August and September surveys. The shelf area surveyed is 15,750 km2. The shelf area and region of hypoxia were calculated from maps similar to those shown in Figure HYP-02. Credit: NOAA Fisheries

During the anomalously warm years in 2015 and 2016, the copepod community remained in a warm state and never transitioned to a cold water (upwelling) community during those years. During January through May of 2017, the copepod community was still anomalously warm. However, the community did shift to a cold water community in late June 2017, 2 months later than the 1998–2014 climatology. In both 2018 and 2019, the community shift from winter to summer occurred about one month later than the climatology. However, in 2019, the fall transition (the shift from an upwelling to a downwelling copepod community) was very early, which, together with the late start, resulted in a 2.5-month shorter duration of the cold-water copepod community. During the summer of 2019, the northern copepod anomalies were much higher than normal, ranking second highest in our time series (Figure 5). 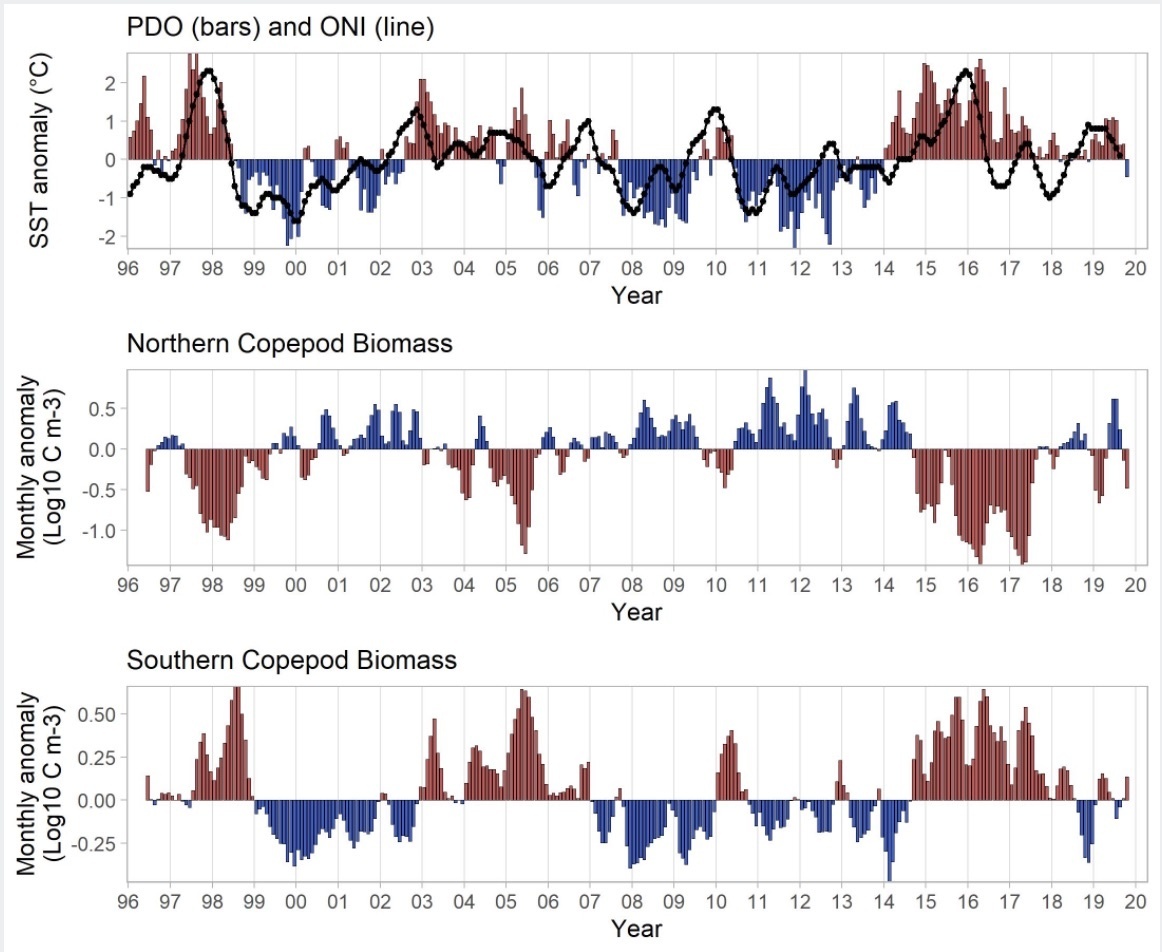 Figure 5. The Pacific Decadal Oscillation (upper), and monthly biomass anomalies of the northern (middle) and southern (lower) copepod taxa from 1969 to present. Biomass values are log base-10 in units of mg carbon m–3. Credit: NOAA Fisheries

Colonial tunicates called pyrosomes were a common occurrence in our plankton nets from fall 2016 through midsummer 2018. We did not encounter pyrosomes in 2019.

The winter biomass of larval stages of fish species common in salmon diets in 2019 was the 20th lowest in the 22-year time series (Figure 6). The community composition of ichthyoplankton in 2019 was dominated by offshore taxa, similar to that seen in 2015-2017, with the community indicator suggesting poor food conditions for piscivorous juvenile salmon that out-migrate into the ocean in 2019. 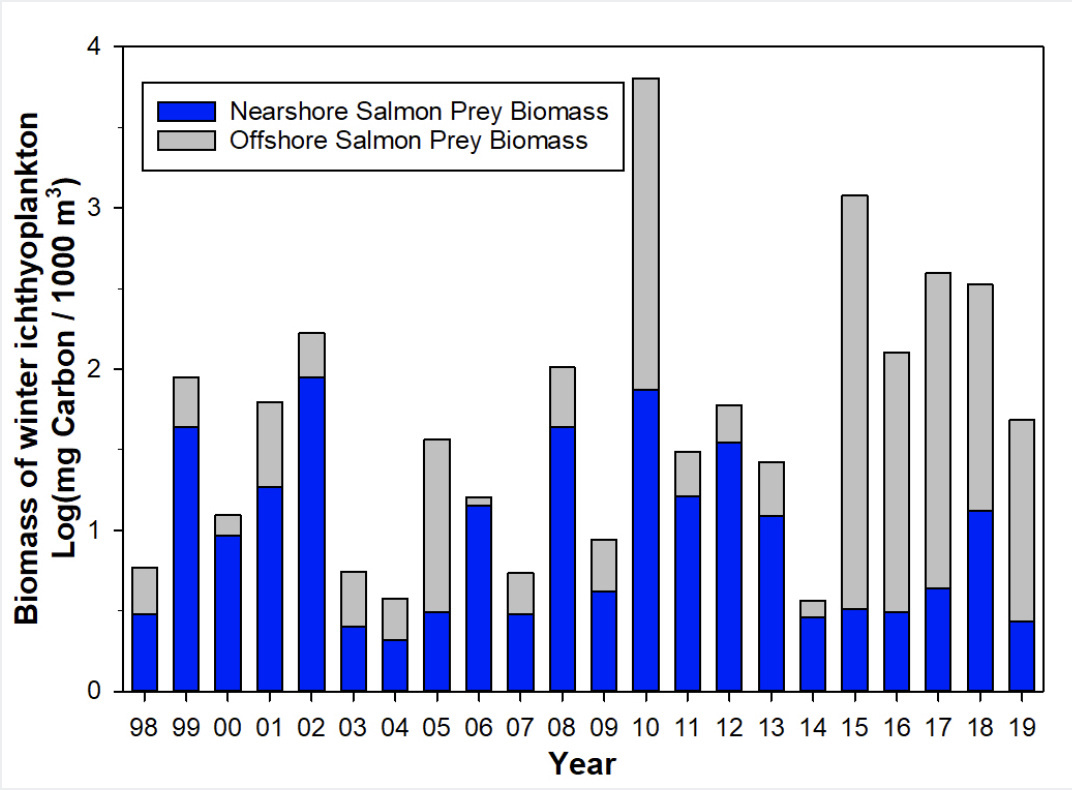