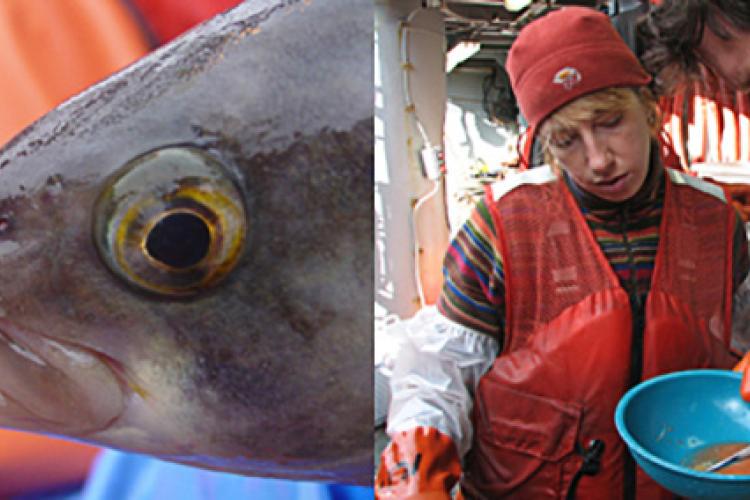 During the Atka mackerel mark-recapture research charters from 2002 to 2004, approximately 2,700 stomach samples were collected. These samples were analyzed in the Resource and Ecology and Ecosystem Modeling laboratory and  Atka mackerel food habits were extensively examined (in fulfillment of a Master’s thesis). The primary focus of this research is on the feeding ecology of Atka mackerel in two Aleutian Island passes. Previous research has shown disparate Atka mackerel growth along a longitudinal gradient with size-at-age decreasing from east to west across the Aleutian chain.  In general, latitudinal growth differences in fish have been well documented, commonly due to genetic and temperature clines. Longitudinal growth differences are less common and in the case of Atka mackerel, genetic variation between our study areas was excluded as a factor. The hypotheses are based on current evidence that the observed longitudinal growth difference is a combination of up to three factors, prey quantity, prey quality and temperature.

The secondary focus of this research was to examine the spatial and temporal variation in Atka mackerel food habits. In these 2 study areas The Magnuson-Stevens Act mandates that all Fishery Management Plans identify those habitats, including water column and substrates necessary to fish for spawning, feeding or growth to maturity. Average stomach fullness was used as a proxy for feeding intensity.

In both study areas there appeared to be distinct feedings grounds. Additionally, one of the areas showed significantly higher average stomach fullness inside the trawl exclusion zones. Essential fish habitat includes both the water column as well as bottom habitat. To understand the mechanisms that may be contributing to the observed spatial patterns in feeding intensity, several variables were examined: bottom depth, average fish length per observation, time of day and temperature. Using both surface and bottom temperature, areas were identified where the water column was well mixed or stratified. The only significant factor explaining observed feeding patterns was water column structure (mixed vs. stratified). It appeared that Atka mackerel prefer areas of strong mixing for feeding. However, in the fall months feeding intensity declines sharply. During this time, egg cannibalism contributes significantly to the Atka mackerel diet. The spatial pattern observed at the Amchitka study site showed the only feeding taking place occurred inside the trawl exclusion zone where egg cannibalism was prevalent. This may be due to the fact that Atka mackerel nests were located inside the trawl exclusion zone.