We use information collected during the Alaska Fisheries Science Center's annual longline survey on the continental slope of the eastern Bering Sea, Aleutian Islands, and the Gulf of Alaska to estimate the size of the sablefish population in Alaska. 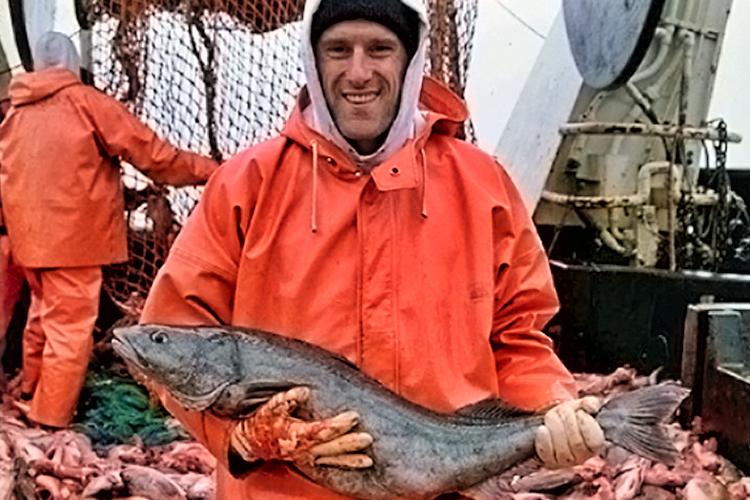 Adult sablefish are found along the continental slope, shelf gullies, and in deep fjords commonly in depths between 366 m to 914 m [200 to 500 fathoms (fm)], although they have been found in depths of less than 183 m (100 fm) to over 1829 m (1000 fm). Sablefish observed from a manned submersible were found on or within 1 m of the bottom. Through our own research and collaborations with the Alaska Department of Fish and Game, we collect a wealth of information on sablefish each year including information on their life span and growth and where they spawn.

We conduct an annual longline survey to learn more about sablefish and major groundfish species in the Bering Sea, Aleutian Islands, and Gulf of Alaska. The survey lasts three months and each day nearly nine miles of hook and line gear is fished on the ocean floor at depths from 200-1000 meters. The survey is conducted using a chartered fishing vessel capable of catching and processing the catch at sea which allows the vessel to stay at sea for multiple weeks between port calls. A unique aspect of this survey is that the charter vessel retains most of the catch after the scientific data are recorded, which funds the survey operations.

The relative abundance indices produced from this survey are combined with age, length, and fishery data to estimate absolute abundance of several major groundfish species. Together this information is used to estimate population size and determine catch quotas for this commercially important fish species in Alaska. Although in terms of landed weight, sablefish support a relatively small fishery, its high price per pound makes it a nearly 100 million dollar fishery, third in value to walleye pollock and Pacific cod.

What Do We Know About Sablefish in Alaska? 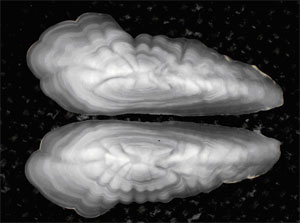 Sablefish are a long-lived species with fish over age 40 years commonly found in commercial samples. The maximum reported age in Alaska is 94 years. In Southeast Alaska inside waters the maximum age is 65 years (from Alaska Department of Fish and Game Survey data, 1988-2001). However, because sablefish are difficult to age, these ages are approximate.

Spawning occurs pelagically at depths of 300-500 m near the edges of the continental slope. Eggs develop at depth and larvae develop near the surface up to 180 miles offshore. The average spawning date, based on otolith analysis, is March 30. During surveys of the outer continental shelf, most young-of-the-year sablefish were caught in the central and eastern Gulf of Alaska. Near the end of the first summer, pelagic juveniles less than 20 cm drift inshore and spend the winter and following summer in inshore waters, reaching 30-40 cm by the end of their second summer. After their second summer, they begin moving offshore, typically reaching their adult habitat, the upper continental slope, at 4 to 5 years. 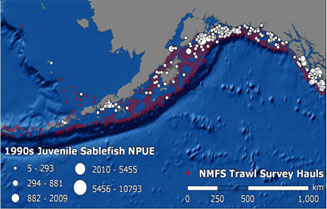 Distribution of juvenile sablefish in the 1990s as sampled by the trawl survey.

Sablefish are assessed as a single population in Federal waters off Alaska because northern sablefish are highly migratory for at least part of their life. Sablefish are managed by discrete regions to distribute exploitation throughout their wide geographical range. There are four management areas in the Gulf of Alaska: Western, Central, West Yakutat, and East Yakutat/Southeast Outside (SEO) and two management areas in the Bering Sea/Aleutian Islands (BSAI): the eastern Bering Sea (EBS) and the Aleutian Islands region.

Because juveniles appear to migrate all throughout Alaskan waters (see map above), little fine-scale genetic structure is expected. However, some genetic work is currently underway to test this hypothesis. 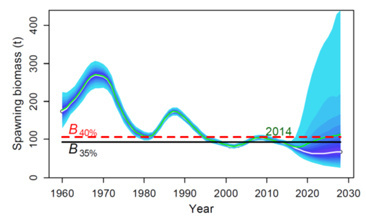 The Alaska Fisheries Science Center models the entire federally managed Alaska sablefish fishery as one population, integrating data from the Bering Sea, Aleutian Islands, and the Gulf of Alaska. The model is sex-specific because males and females have different growth and maturity rates, and females attain larger maximum sizes.

The model incorporates data from a variety of sources such as the historical Japanese longline survey and fisheries, the annual domestic Alaska Fisheries Science Center longline survey, the biennial NOAA Fisheries bottom trawl survey in the Gulf of Alaska, and the domestic fixed and trawl gear fisheries. The data provided by these sources include catch, relative abundance, age and length compositions, size-at-age, and maturity-at-age.

The model is a separable age-structured model coded in AD Model Builder, which uses a maximum likelihood and Bayesian approach to estimate parameters such as fishing mortality, absolute abundance, selectivity, and catchability. The model is updated annually in conjunction with new longline survey data. The model is also used to project the population forward in time to calculate fishing mortality and quotas for subsequent years under various scenarios. These quotas are allocated to smaller management areas by computing a weighted 5-year average of survey and fishery catch rates by area. Bayesian MCMC methods are used to quantify the uncertainty of estimates.

Current estimates indicate that there were two peaks in biomass (1970 and 1990), with periods of low recruitment and heavy fishing leading to rapid declines. Several above average year classes have recently returned spawning biomass close to the target level. 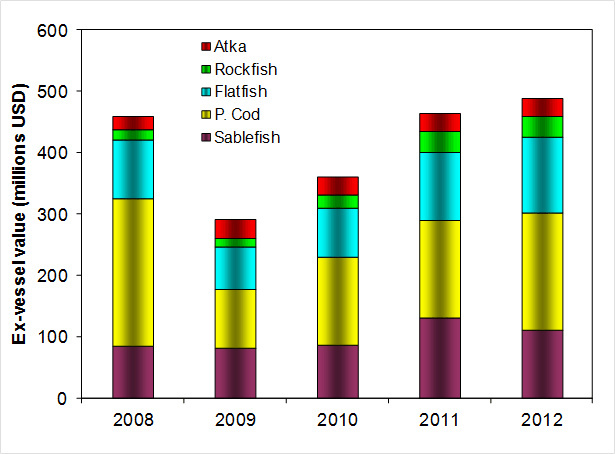 Due to its rich oil content, sablefish is exceptionally flavorful and an excellent fish for smoking. It is considered a delicacy in many countries, particularly Japan, for its sweet taste and flaky texture. Sablefish is very high in healthy long-chain omega 3 fatty acids, EPA (eicosapentaenoic acid), and DHA (docosahexaenoic acid). It contains approximately as much EPA and DHA as wild salmon. Wild Alaskan sablefish is also very low in PCBs, dioxins, and mercury.

Sablefish is one of the highest valued finfish per pound in Alaska commercial fisheries (more than $3/lb ex-vessel price). Although in terms of landed weight, it is a relatively small fishery. Its high price per pound makes it a nearly 100 million dollar fishery, 3rd in value to walleye pollock and Pacific cod (see figure below).