We develop computer models and input a variety of data collected during research surveys in Alaska to determine the condition of Pacific Ocean Perch stocks. 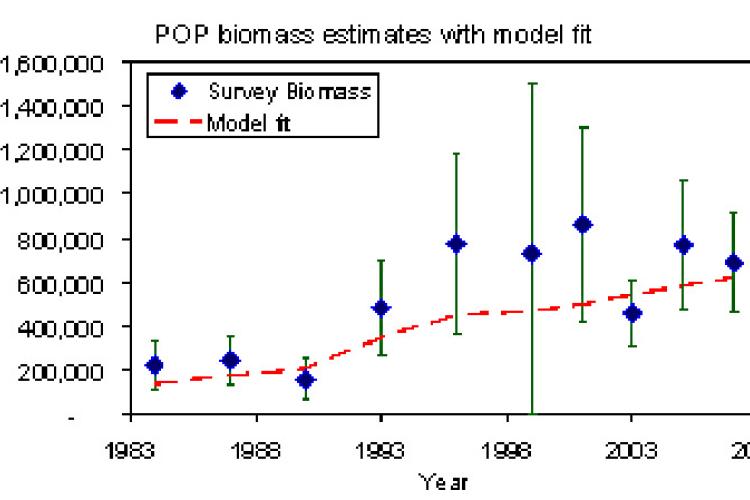 However, in general, rockfish are very difficult to survey because they can be patchy, partly pelagic, or associated with untrawlable bottom habitat. Survey biomass estimates for Pacific ocean perch have shown rapid increases in the last decade. However, because these estimates are imprecise, estimated total biomass in the stock assessment has more gradually increased from a low near 100,000 t in 1980 to around 300,000 t currently. The historic low is estimated precisely, while recent increases are not quite as certain. Current biomass is likely between 200,000 and 600,000 t. Age of 50% selection are about 5 and 6.5 years for survey and fishery, respectively. Estimated fishing mortality shows that fishing mortality has decreased dramatically from historic rates and has leveled out in the last decade.

Recruitment for Pacific ocean perch is highly variable and large recruitments comprise much of the biomass for future years. Recruitment appears to have increased since the early 1970s, with the 1986 year class becoming progressively more important. The 1990s started to show some steady above-average recruitments. However, these recruitments, especially recently, are highly uncertain.