Alaska Fisheries Science Center conducts a variety of research on Pacific ocean perch, which seem to be most abundant in the Gulf of Alaska and Aleutian Islands. 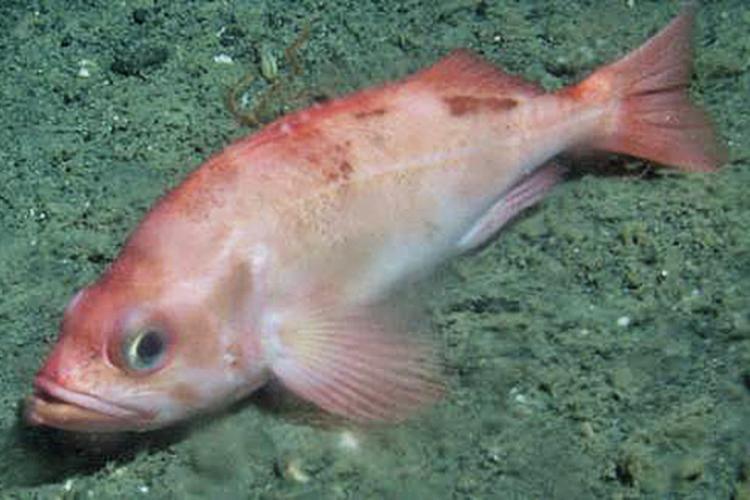 Through our survey and other related research we have learned that adult fish are found primarily offshore on the outer continental shelf and the upper continental slope in depths 150-420 m. Seasonal differences in depth distribution have been noted by many investigators. In the summer, adults inhabit shallower depths, especially those between 150 and 300 m. In the fall, adults apparently migrate farther offshore to depths of ~300-420 m. They reside in these deeper depths until about May, when they return to their shallower summer distribution.

Their seasonal distribution pattern is probably related to summer feeding and winter spawning. Although small numbers of Pacific ocean perch are dispersed throughout their preferred depth range on the continental shelf and slope, most of the population occurs in patchy, localized aggregations. Pacific ocean perch are generally considered to be semi-demersal, but there can be a significant pelagic component to their distribution. Pacific ocean perch often move off-bottom at night to feed, apparently following diel euphausiid migrations. Commercial fishing data in the Gulf of Alaska since 1995 show that pelagic trawls fished off-bottom have accounted for as much as 20% of the annual harvest of this species. 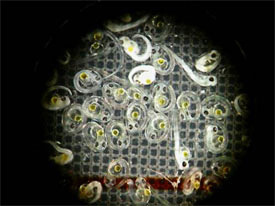 Rockfish eggs and larvae under magnification.

There is much uncertainty about the life history of Pacific ocean perch, although generally more is known than for other rockfish species. The species appears to be viviparous (the eggs develop internally and receive at least some nourishment from the mother), with internal fertilization and the release of live young. Insemination occurs in the fall, and sperm are retained within the female until fertilization takes place ~2 months later. The eggs hatch internally and parturition (release of larvae) occurs in April-May.

Information on the early life of this species is very sparse, especially for the first year of life. Pacific ocean perch larvae are thought to be pelagic and drift with the current. Oceanic conditions may sometimes cause advection to sub-optimal areas, resulting in high recruitment variability (variable survival to majority). However, larval studies of rockfish have been hindered by difficulties in species identification since many larval rockfish species share the same morphological (developmental) characteristics. Genetic techniques using allozymes and mitochondrial DNA are capable of identifying larvae and juveniles to species, but are expensive and time-consuming.

We have positively identified post-larval and early young-of-the-year Pacific ocean perch in offshore surface waters of the Gulf of Alaska, which suggests this may be the preferred habitat of this life stage. Transformation to a demersal (living closer to the seafloor) existence may take place within the first year. Small juveniles probably reside inshore in very rocky, high-relief areas, and by age 3 begin to migrate to deeper offshore waters of the continental shelf. As they grow, they continue to migrate deeper, eventually reaching the continental slope, where they reach adulthood. 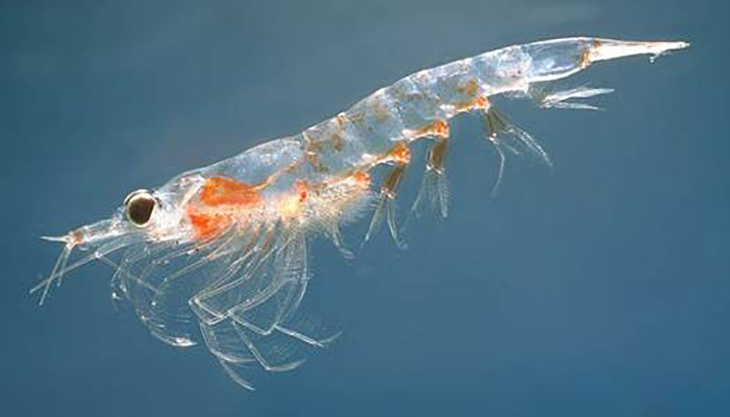 Through on our age and growth studies we have learned that Pacific ocean perch is a very slow growing species, with a low rate of natural mortality (estimated at 0.06), a relatively old age at 50% maturity (10.5 years for females in the Gulf of Alaska), and a very old maximum age of 98 years in Alaska (84 years maximum age in the Gulf of Alaska). Despite their viviparous nature, the fish is relatively fecund, producing large numbers of eggs.  The number of eggs/female in Alaska ranges from 10,000-300,000, depending upon the size of the fish.

Recent work on black rockfish (Sebastes melanops) has shown that larval survival may be dramatically higher from older female spawners. The black rockfish population has shown a distinct downward trend in age-structure in recent fishery samples off the west coast of North America, raising concerns about whether these are general results for most rockfish species. Pacific ocean perch were examined for senescence in reproductive activity of older fish and found that oogenesis (development of eggs) continued at advanced ages. It appears that older individuals have slightly higher egg dry weight than their middle-aged counterparts. Further research is being conducted on the relationship between age and larval production for Pacific ocean perch or other rockfish species in Alaska.

Because deepwater rockfish are subject to barotrauma (injury caused by changes in pressure when they are pulled up from ocean depths), they are very difficult to tag. As a result, most theories on the degree of movement have been based on genetics and speculation. Future genetic work should help answer these questions. In addition, in situ tagging devices such as those developed at Star-Oddi in Iceland might prove useful.

We use a statistical catch-at-age model to help us determine stock status for this species. We input a variety of data including fishery and survey age and length distributions and catch information.

However, in general, rockfish are very difficult to catch during vessel research surveys because their distribution in the ocean can be patchy. They are often associated with untrawlable bottom habitat. Survey biomass estimates for Pacific ocean perch have shown rapid increases in the last decade. However, because these estimates are imprecise, estimated total biomass in the stock assessment has more gradually increased from a low near 100,000 t in 1980 to around 300,000 t currently. The historic low is estimated precisely, while recent increases are not quite as certain. Current biomass is likely between 200,000 and 600,000 t. Age of 50% selection are about 5 and 6.5 years for survey and fishery, respectively. Estimated fishing mortality shows that fishing mortality has decreased dramatically from historic rates and has leveled out in the last decade.

Recruitment for Pacific ocean perch is highly variable and large recruitments comprise much of the biomass for future years. Recruitment appears to have increased since the early 1970s, with the 1986 year class becoming progressively more important. The 1990s started to show some steady above average recruitments. However, these recruitments, especially recently, are highly uncertain. 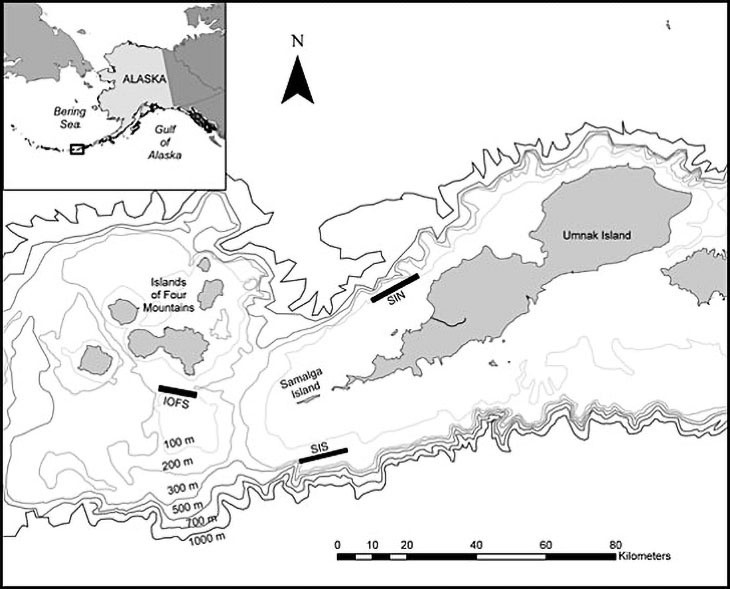 Map of the Samalga Pass and Islands of Four Mountains area in the Aleutian Islands showing the three study sites.

There is very little known of the specific characteristics of juvenile nursery habitat. In general juvenile rockfish are often associated with structured habitats, such as rocky outcrops, boulder fields, deep-water sponges and corals. Nothing is known of the costs and benefits for juvenile Pacific ocean perch in terms of survival and growth of residing in different habitat types.

Two acoustic research surveys were conducted in 2004 to help determine if habitat limitation is a factor affecting recruitment in this species, specific habitats used by juveniles and their value need to be determined. This work was carried out in the Aleutian Islands around Samalga Pass and the Islands of Four Mountains.  Additional work is ongoing.

Last updated by Alaska Fisheries Science Center on May 04, 2022