On Monday, September 7, a young female Hawaiian monk seal pup was found abandoned during a NOAA monk seal survey of Ni'ihau Island. The pup was emaciated and would certainly have d 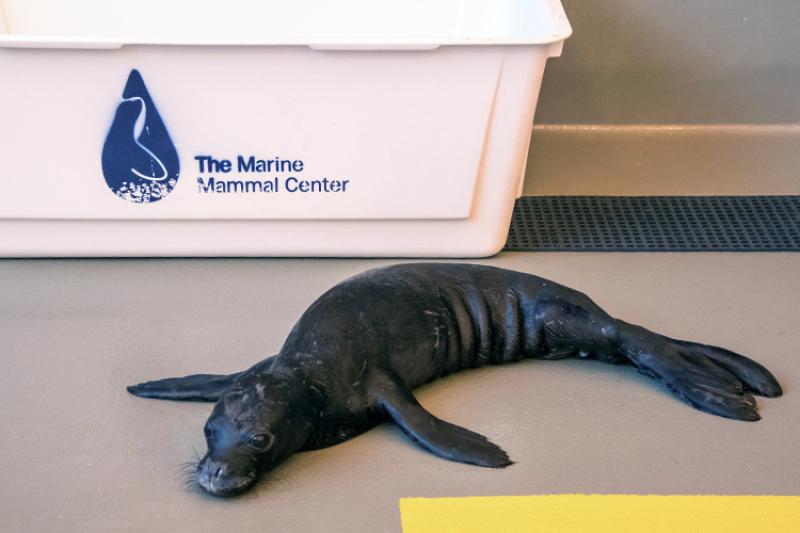 On Monday, September 7, a young female Hawaiian monk seal pup was found abandoned during a NOAA monk seal survey of Ni'ihau Island. The pup was emaciated and would certainly have died without intervention. A plan was devised to transport the seal to Ke Kai Ola, a monk seal rehabilitation facility in Kailua-Kona operated by The Marine Mammal Center. The Robinson family, who own Ni'ihau, and Ni'ihau Ranch staff were supporting the monk seal survey and helped with the first critical step by transporting the young pup to Kauai via helicopter. They also gave the young seal a name, Kilo.

Once on Kauai, Dr. Michelle Barbieri, a veterinarian for the NOAA Hawaiian Monk Seal Research Program and The Marine Mammal Center, assessed the pup and worked to stabilize it.

"It's a really good thing that the team was there to find this seal. She was in dire need of supportive care and would not have made it much longer in the wild," said Barbieri. The pup was severely dehydrated, malnourished and likely anemic, but still showed a remarkable amount of energy. The first action was to start rehydrating the seal while finalizing transport plans.

"With a number of competing and equally important missions occurring throughout the Hawaiian Islands and the greater Pacific Ocean, our Coast Guard personnel work hard to ensure we are best prepared to respond to these critical operations," said Eric Roberts, Marine Mammal Response Coordinator, Coast Guard 14th District. "This particular case highlights a perfect example, we had a resource available and were able to provide a unique service to help a federally protected and critically endangered species."

Once at Ke Kai Ola, the pup was weighed, measured and given a full physical examination. Veterinary staff and trained volunteers gave the pup electrolytes through a stomach tube, and will continue to do so 4 to 5 times daily. "The tube feedings will start to include blended whole fish in the next 24 hours, as this pup is in dire need of calories. But we have to get her rehydrated first," says Deb Wickham, Operations Manager at Ke Kai Ola. Blood samples will be collected and analyzed tomorrow. The pup is in guarded condition but experts are optimistic that she will be able to make a full recovery and be released into the wild in a few months.

In its first year of operations, Ke Kai Ola has rehabilitated eight young monk seals from the Northwestern Hawaiian Islands. Six have been successfully returned to the wild and the remaining two will be headed home this weekend. Kilo is the first patient from the main Hawaiian Islands to come into the hospital for rehabilitation.

There are currently about 1,100 monk seals left in Hawaii and each individual female seal is important to help ensure the future of the species. NOAA Fisheries is the lead for monk seal recovery efforts, but it is a network of partners that makes much of their mission successful.

"The compassion and support for monk seals shown by the Robinson family and Ni'ihau residents in transporting the seal from Ni'ihau; the rapid response by the Coast Guard to get the seal to urgently needed care; and the careful rehabilitation by The Marine Mammal Center, all were necessary to give this young seal a real chance for survival," David Schofield, NOAA's Regional Marine Mammal Response Program Coordinator says. "And in turn they give the many pups she could have in the future the chance to help save this critically endangered species from extinction."

About the Marine Mammal Center

The Marine Mammal Center is a nonprofit veterinary hospital, research and educational center dedicated to the rescue and rehabilitation of sick and injured marine mammals and to the study of their health. Since 1975, the Center has been headquartered in the Marin Headlands, Sausalito, Calif., within the Golden Gate National Parks and has rescued and treated nearly 20,000 marine mammals. In 2014, the Center opened Ke Kai Ola, a hospital for the rehabilitation of the critically endangered Hawaiian monk seal, in Kailua-Kona, Hawaii. For more information, please visit www.MarineMammalCenter.org.

About the U.S. Coast Guard

Safeguarding marine mammals falls under the Coast Guard's living marine resources mission, one of the service's 11 statutory missions. The nation's waterways and their ecosystems are vital to the country's economy and health. This includes ensuring the country's marine protected species are provided the protection necessary to help their populations recover to healthy, sustainable levels.