The traditional ceremony honored the achievements of the outgoing captain and anticipated continued success under its new leadership. 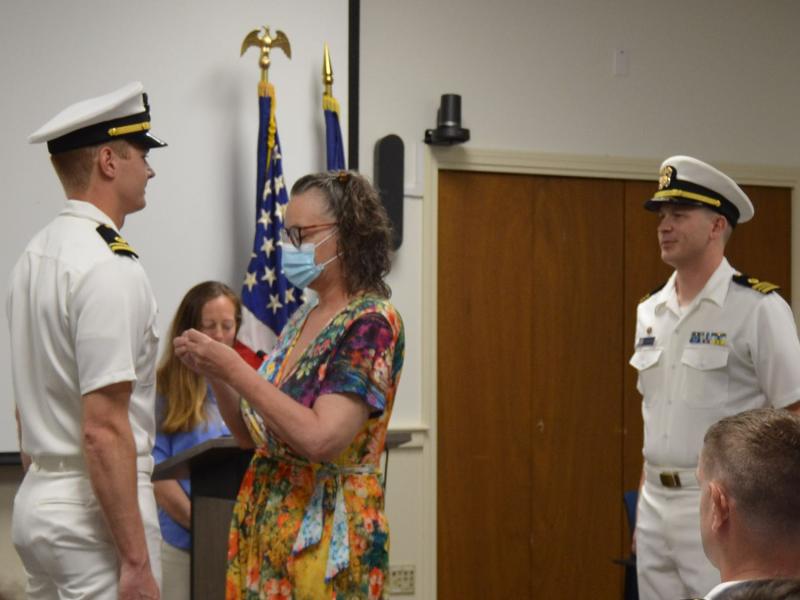 The Gloria Michelle is a 72-foot vessel that conducts surveys and other science research projects from Virginia to Canada. The NOAA Corps is a uniformed service that operates and manages ships and aircraft for NOAA’s research efforts. It has commanded the Gloria Michelle since 1980.

Creed relieved Lt. Cmdr. Benjamin VanDine, who had been the officer in charge on the vessel for the past 4 years. Under VanDine’s command, the Gloria Michelle lost no sea days because of mechanical or medical issues. This is an impressive feat for an assignment that spanned the height of the COVID-19 pandemic.

Creed had worked closely with VanDine as the junior officer-in-charge. He presented his predecessor with a plaque, a framed illustration of the Gloria Michelle, and a small trophy naming him “Officer of the Extra Year.” Typically, officers serve 3 years in this assignment, but logistical complications from COVID-19 extended VanDine’s service an additional year.

In VanDine’s next assignment, he will serve as the executive officer of the Surface and Upper Air Division in the Office of Observations at NOAA’s National Weather Service in Silver Spring, Maryland.