Love of the ocean led to a career at sea for a New Jersey native. 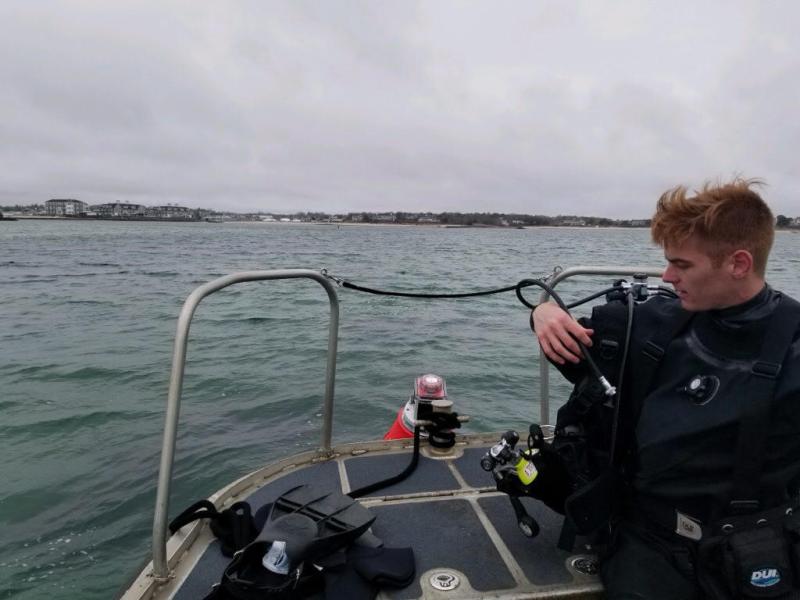 Alex Creed lived one block from Raritan Bay in Cliffwood Beach, New Jersey growing up. That meant he spent lots of time going to the beach, surfing, fishing, and scuba diving as a child. From first grade through high school, he explored the nearby marine environment and has always loved the water. On June 8, 2022, he was named commanding officer of the R/V Gloria Michelle, a 72-foot research vessel owned by NOAA's Northeast Fisheries Science Center and operated by NOAA Corps officers. Prior to that, Creed was assigned to the Gloria Michelle as the junior officer-in-charge.

His connection to NOAA actually began in high school at the Marine Academy of Science and Technology (MAST). The academy is a public vocational high school with a focus on marine science located at Sandy Hook, New Jersey. Teachers there mentioned NOAA Corps as a possible career path. He already knew he wanted to work in the marine sciences field, and took advantage of classes in marine biology and oceanography.

The James J. Howard Marine Sciences Laboratory, home of NOAA Fisheries’ Sandy Hook Laboratory, is also located at Sandy Hook, and MAST is next door to it. Creed had a research class there during his senior year.

Creed’s interest in the marine world led him to Eckerd College in Saint Petersburg, Florida. He graduated with a bachelor’s degree in marine science with a focus on marine biology, and a minor in coastal management. Most of his college extracurricular studies, via internships and personal interest, were focused on wetlands and coastal ecosystems. They included work with a professor to study mangrove forests in Florida and Indonesia.

In college he became more involved with boating, both as a part of Eckerd College’s maritime search and rescue team and sailing for fun. He also worked as a commercial diver, cleaning boat bottoms for 3 months.

“While I was in college a friend of mine who graduated two years ahead of me went into the NOAA Corps,” Creed said. “That reignited my interest in the organization.” A recreational diver since 2009, he has been a NOAA diver since March 2019. ”Not all NOAA Corps officers are divers, but the opportunity to dive as part of my work was an extra incentive for me to join the Corps. Once I completed basic training, I was assigned to NOAA Ship Pisces, based in Pascagoula, Mississippi.”

His next stop was Woods Hole, Massachusetts and the R/V Gloria Michelle, a 72-foot vessel operated by the Northeast Fisheries Science Center. He joined the vessel as junior officer in charge at a formal change of command ceremony October 11, 2019. He joined Officer in Charge Benjamin VanDine on the two-man crew.

“I was very new and fresh with a lot to learn,“ Creed said. “My only other assignment had been on the 209-foot Pisces, a vessel similar to the NOAA Ship Henry B. Bigelow.” The Bigelow is assigned to the Northeast Fisheries Science Center, and is homeported in Newport, Rhode Island.

Aboard the Gloria Michelle, Creed has learned boat operations and how to conduct groundfish surveys in nearshore waters and the shrimp survey in the Gulf of Maine. He has also worked on special projects, such as outreach and education opportunities with local school students and the public.

“Time management is a critical skill in this line of work. It’s important to ensure everything is being done when it needs to in the present, while also planning for the long-term success of the boat,” Creed says.

His favorite part of the job as a NOAA Corps officer?  “It’s the breadth of experience we get in all aspects of NOAA’s missions. I like being involved and seeing the research NOAA scientists are conducting, and facilitating that research by running an operational platform. I look forward to the hands-on nature of the work and running the boat.”

His advice for students interested in a career in the Corps is to reach out and talk to an officer about what it’s like. “It is a great career that offers a wealth of opportunities.”

For now, the next few years will keep him in Woods Hole. “I hope to make NOAA Corps a career, so hopefully I will be somewhere in the fleet or ashore with NOAA for the next 20 years, or beyond.”