Local fishermen team up with scientists to find out why Chinook salmon returns to the Yukon River are declining. 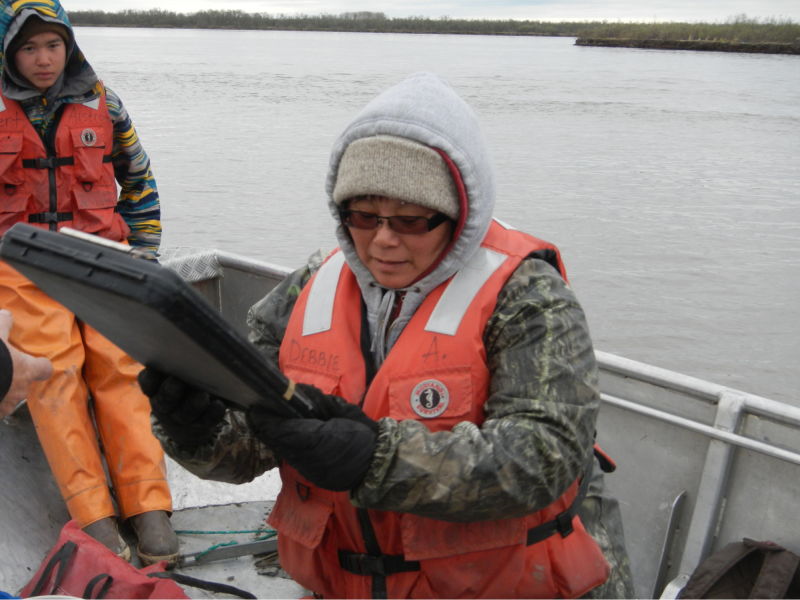 On the Yukon River, Chinook salmon are woven into the fabric of life and culture. They are a resource that indigenous people have harvested for more than 1,000 years. But over the last 20 years or more, the Chinook populations have declined dramatically. Fewer Chinook are returning to the river each year, and those that do are smaller and younger than they have been in the past. This has created hardship for the people who rely on this resource. It is nurturing a strong desire to understand and contribute to solutions to address the dwindling returns.

Ragnar Alstrom, Executive Director of Yukon Delta Fisheries Development Association, explains it this way: “We want to be a part of figuring out why our Chinook aren’t returning. Instead of standing by and waiting for someone else to figure it out, we want to be engaged in the science.”

So began a special partnership between NOAA Fisheries, Alaska Department of Fish and Game, and local fishermen from the villages of Emmonak and Alakanuk. Starting in 2014, the Yukon Delta Fisheries Development Association (YDFDA) worked with scientists to identify nine permanent sampling stations on the three main lower Yukon distributaries. Each summer, local fishermen and NOAA Fisheries biologists work together. They set and retrieve salmon sampling nets, identify and count the catch, and measure water temperature and depth. They send salmon samples to the NOAA Fisheries Auke Bay Laboratories where their diet and body condition are analyzed.

“Then in 2020 COVID-19 hit, and it shut down our ability to conduct any fieldwork that summer,” said Katharine Miller, NOAA fisheries biologist, Alaska Fisheries Science Center. “In Alaska there were particularly strong restrictions on anyone from outside going into small remote villages, because of the high vulnerability and very limited healthcare capabilities there. If we didn’t have the partnership with YDFDA, an entire summer of sampling would have been lost.”

Many of the YDFDA partners on this research had been with the project since it started in 2014. Thanks to their expertise, with a few additional COVID precautions, they were able to continue field sampling even though our scientists could not travel to the field station.

This is not the first time that YDFDA has been integral to keeping this time series going. In 2017 and again in 2019, YDFDA provided the funding needed to hire captains and technicians so we could continue to collect data and samples.

The partnership is a great example of the type of citizen science collaboration that NOAA is pursuing in its new Citizen Science Strategy released in January 2021. Community-based collaborations increase the cost effectiveness of projects, address social needs, provide hands-on STEM learning. They also connect the public directly to NOAA Fisheries science missions. It is a win-win for both the community and the agency.

“One of the great things about a project like this is that local people are directly involved in the science,” said Courtney Weiss, YDFDA biologist. “Many of the technicians we hire are high school students or recent graduates. This is a great opportunity to introduce these young people to the possibility of science careers and training in a field important to managing subsistence resources. It’s also a great way to provide economic development to the region.”

Sharon Alstrom started working with the project in 2017. She had been helping her father with the adult salmon test fishery for the Alaska Department of Fish and Game. She decided to make the switch to be part of the Yukon River juvenile salmon research.

“I love how this went from being just a job to a career!” said Sharon, who is now an undergraduate at Rio Salado in Arizona. “I am now working with Courtney at YDFDA all year on this project and also on my biology degree.”

The juvenile life stage is a particularly vulnerable time for many fish species—especially for salmon. They undergo a physiologically stressful transformation from a freshwater to marine environment as they leave their river homes. This stress may be exacerbated by rapid environmental changes in subarctic regions like the Yukon. Warmer winters, less ice, and higher water temperatures may affect juvenile fish health and survival.

“There is some evidence that much Chinook salmon mortality occurs during the freshwater and early marine period,” said Miller. “The more we learn about the factors affecting survival of juvenile Chinook salmon in the river, the closer we can get to understanding what is happening to the adult returns.”

But capturing juvenile salmon on a river as large and complex as the Yukon presents several challenges. The Yukon’s silty waters enter the Bering Sea at three main mouths spread across a delta the size of the state of Louisiana. Sloughs, back channels, and tributaries branch off from the three main channels. The huge sediment load carried by the river creates an ever-shifting mosaic of mid-channel islands and sandbars. Finding a 4-inch-long salmon in this environment is all about knowing where to fish and how to get around the river without getting stuck on a sandbar … or lost!

This is where the expertise of local residents and fishermen come in.

“This project is so successful because local residents who live and work in the environment year-round are partners in the research. It is also creating new opportunities for students to engage in science,” said Bob Foy, Alaska Fisheries Science Center Director. “This collaborative research underscores the importance of working together during times of change.”