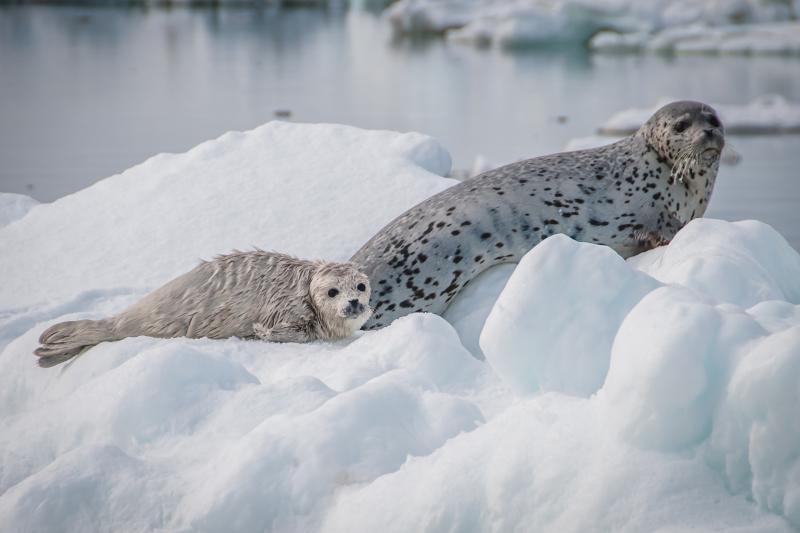 A new NOAA Fisheries study finds some of the first quantitative signs that three species of seals are experiencing impacts of warming in the Bering Sea and Aleutian Islands. These three species—ribbon, spotted, and harbor seals—are all typically resilient, long-lived predators that eat a variety of prey.

In the past decade the Arctic region has undergone a rapid transformation. Temperatures rose. Sea ice extent and thickness fluctuated dramatically, reaching both record highs and lows within the past decade.

Ecological changes have been profound and relatively well-documented for fish and lower trophic (food web) levels. Scientists have observed changes in species distributions, reproductive and mortality rates, and body condition of individuals.

Changes in upper trophic levels have been less apparent. Many predators are difficult to observe and monitor. Some, especially generalist predators, are thought to be relatively insensitive to short-term ecosystem shifts. Their ability to switch among diverse prey allows them to smoothly adapt to changes in a few prey species.

When these adaptable predators do show declines in condition, it likely reflects broad underlying ecological shifts in multiple prey species.

“Our findings point strongly to climate-related impacts. We saw declines in seal condition that coincided with recent pronounced warming,” said study leader Peter Boveng, biologist at NOAA Fisheries’ Alaska Fisheries Science Center Marine Mammal Laboratory. “Warming conditions in the Arctic seem to be affecting the condition of individual seals in a way that could impact their populations.”

These three seal species are abundant upper trophic level predators in the Pacific Arctic. They have high metabolic rates and their populations collectively number in the hundreds of thousands. Ribbon, spotted, and harbor seals are significant consumers with the potential to shape the food web.

Ribbon seals and spotted seals are ice-associated species. They breed mainly in the seasonally ice-covered waters of the Bering Sea and Sea of Okhotsk. These seals depend on sea ice during key life events, including pupping, breeding, and molting.

“There has been a lot of concern about ice-associated marine mammals and their fate in a warming arctic. Sea ice loss has been dramatic, and we anticipate that it will continue over the coming decades,” said Boveng. “We assumed that ice-associated seals in Alaska would be affected, but we didn’t yet have quantitative data in hand.”

Harbor seals are found in all coastal Alaska waters north to at least Bristol Bay and the Pribilof Islands. Most harbor seals do not depend on sea ice (except for those that haul out on ice floes in glacial fjords). That species as a whole may respond differently than ribbon and spotted seals to ecological change.

NOAA Fisheries is responsible for the protection of seals as well as other marine mammals. Together with our partners, Alaska Fisheries Science Center scientists provide the information needed to effectively manage and conserve seals in Alaska.

“We’re responsible for monitoring protected species to make sure they maintain their function in the ecosystems,” Boveng said. “Part of that is keeping tabs not just on population trends, but on the health and condition of individual animals. Are they facing problems with pathogens and contaminants? Are they finding the food they need? And are they continuing to meet the needs of Alaska Native communities that rely on them?”

Beginning in 2007, Boveng’s team assessed the body condition (how heavy a seal is for its length) of ribbon and spotted seals in the Bering Sea. They also assessed harbor seals in the Aleutian Islands. The study period included the North Pacific heat wave of 2014–2016 and its lingering effects through 2018. The primary goal of the research was to look for evidence of trends in body condition that might reflect bottom-up food web changes in the ecosystem during a period of rapid ecological change.

This work complements a long-term program conducted by the Alaska Department of Fish and Game to monitor the health and condition of seals. The program, in partnership with Alaska Native subsistence hunters, samples bearded, ringed, spotted, and a few ribbon seals harvested by hunters. This provides a relatively large number of samples, mostly from areas near communities and outside of the pupping season. The NOAA Fisheries study used live-caught seals sampled off shore and during pupping. Together these studies provide a more complete picture than either alone.

A Trend of Declining Body Condition

Overall, the body condition of the three seal species declined from 2007 to 2018. On top of this overall decline, pup condition declined in all three species, and ribbon and harbor seal condition decreased across all sex and age classes. In spotted seals, the decline in body condition was limited to the pups.

Declines in body condition of ribbon and spotted seal pups may have been due to poor foraging conditions for their mothers during pregnancy and while nursing. Their energy needs are very high during that period.

Both species concentrate near the sea ice edge during pupping. Historically, the edge has been located in a region where food is abundant. During the 2007–2018 study period, sea ice extent fluctuated from record highs to record lows. On average it decreased by 47,000 square kilometers a year. These changes mean the sea ice edge, especially in the later, warm years, may have been located in areas less favorable for seal foraging.

Ribbon seals may be more sensitive than spotted seals to sea ice loss. Ribbon seals are more adapted for deep diving. As the sea ice edge in the Bering Sea recedes northward into shallower waters, ribbon seal mothers and pups may find themselves far from their preferred foraging grounds. The foraging habits of spotted seals are more suited to shallow shelf waters. This may explain why adult ribbon seal body condition declined, while spotted seal adult condition remained stable or slightly increased.

During the study period, NOAA declared two unusual mortality events  for seals in Alaska. The first (2011–2016), involved all four species of ice seals in Alaska (ribbon, spotted, bearded, and ringed). Affected seals had sores, hair loss, and lethargic behavior, but most were not in poor nutritional condition. A definitive cause for this UME was not determined, but there was no clear link to food or climate-related changes.

The second UME was declared in 2019 after large numbers of dead and stranded bearded, ringed, and spotted seals were found beginning in June 2018. This UME shows more signs of being food-related: most of the stranded seals have been young and/or emaciated. The coincidence of this UME with record low sea-ice extent and absence of ice from vast portions of the pupping areas for these ice-associated seals strongly suggests a climate-related impact.

Though harbor seal data were limited to three sampling events during 2014–2016, the rate of decline in body condition was striking. The study estimated an annual decrease of about 6 kilograms each year for an average-sized individual of 64 kilograms.

Harbor seal populations have undergone a long term decline in the Aleutian Islands. The population dropped precipitously between 1980 and 1999. The decline was most dramatic in the western Aleutians, where counts dropped by 86 percent, to about 5,500 individuals. The population has not recovered since, and the cause is unknown.

“But we suspect that the recent declines in body condition during our study are an acute response to the very strong North Pacific marine heat wave, rather than a continued chronic response to whatever has caused the long-term decline in numbers,” said Boveng.

Increasing our Understanding of Seal Survival in a Changing Alaska

“Our results add to the knowledge we use to evaluate spotted, ribbon, and harbor seal status under the Marine Mammal Protection Act,” said Boveng. “These findings help build the body of information we need to make more informed assessments.”

Ringed and bearded seals are strongly associated with sea ice and are listed as threatened under the Endangered Species Act. These species could also be influenced by warming, ice variability, and resulting ecosystem changes. Information about body condition and other measurements collected by the Alaska Department of Fish and Game is a key part of assessments for those species and the spotted and ribbon seals that we studied.

Boveng’s team is exploring further ways to monitor body condition of seals and include it in assessments.

“We hope to develop new methods to incorporate body condition into large area surveys of population trends using high resolution cameras. As part of a move to expand the use of uncrewed aerial systems, NOAA is supporting the development of a method for this,” said Boveng. “Hopefully, we can develop body condition indices from those flights to extend our measurements from large-area surveys. That would give us access to thousands of measurements.”

Meanwhile, the current study potentially provides a glimpse of the future.

“Warm conditions like those recorded in 2018 and 2019 are predicted to become more frequent,” said Boveng. “If they do, impacts from loss of sea ice on the condition of seals are likely to become clearer.”