The Curious Relationship Between Acadian Redfish and Sea Pens

In 2015 some of the sea pens sampled were found to harbor larval redfish. Because there were also adult redfish in the shrimp survey tows, it was difficult to verify that larval fish were there because of an important biological phenomena or from spawning adults in the haul. 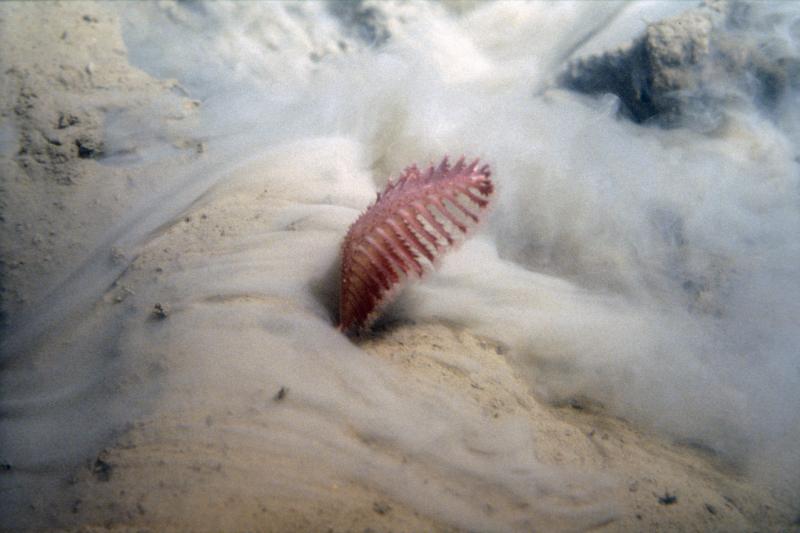 For decades, a single species of sea pens, Pennatula aculeate, has been observed on soft muddy bottoms in the Gulf of Maine. These soft corals resemble a quill pen made from a bird feather. They have no commercial value, but have raised curiosity and questions about their role in the Gulf’s ecosystem. NOAA Fisheries researchers aboard the R/V Gloria Michelle made a short trip Oct. 10-12 to the Gulf of Maine to collect sea pens as part of an on-going study of their relationship with larval redfish.

The sea pen’s “feathers” are actually coral polyps that capture prey as the water passes through them. NOAA and Maine state scientists have observed for some time that sea pens and Acadian redfish occur together. Are the sea pens essential fish habitat for the larval stage of Acadian redfish, a commercially valuable species?

During the Northeast Fisheries Science Center’s annual summer Gulf of Maine shrimp survey aboard the R/V Gloria Michelle, sea pens are sometimes caught in the trawl’s mesh net. For the past few years, survey scientists made a point of noting whether redfish were present in the catch and if the fish were spawning.

In 2015 some of the sea pens sampled were found to harbor larval redfish. Because there were also adult redfish in the shrimp survey tows, it was difficult to verify that larval fish were there because of an important biological phenomena or from spawning adults in the haul.

To further test this connection, Rich Langton from NEFSC and three University of Maine students headed to sea aboard the Gloria Michelle in June of 2016 to capture sea pens and any associated redfish larvae. They conducted 19 beam trawls at 150 - 180 meter depths (roughly 490-600 feet deep), successfully avoiding adult redfish while capturing many sea pens. The animals are now part of an ongoing study to determine the occurrence of associated fish larvae and to better understand the age and growth of the sea pens themselves.

“Very small sea pens were seen in the catch in 2016, which we are assuming reflects a recent recruitment event,” Langton said. “The findings from the 2016 cruise warranted further investigation.”

Fast forward to October 2017. Langton and colleagues DeMond Timmon and Victoria Kentner from the NEFSC’s Sandy Hook Laboratory continued to evaluate the relationship between larval redfish and sea pens, looking at changes in the size structure of the sea pen population by revisiting stations sampled in 2016. One of their goals is to compare the size of the sea pens captured a year later to document any pattern of growth in the corals.

Despite losing a day to weather, the team conducted eight trawls, revisiting a cluster of stations roughly northeast of Platts Bank, and captured hundreds of sea pens representing different size classes. Individual sea pens were frozen for examination in the lab. There, researchers will examine the sea pens under a dissecting microscope, looking for fish larvae. Each animal will also be measured and the length recorded, and its hard central rod will be examined to see if there are growth rings, used much like tree rings, to age sea pens.

While collections of sea pens during recent shrimp surveys has confirmed a larval redfish-sea pen association, Langton says it is difficult to definitively state that this is a biological relationship rather than an artifact of the co-occurrence of redfish and sea pens in the trawl haul.