Disentangling a Whale of a Problem 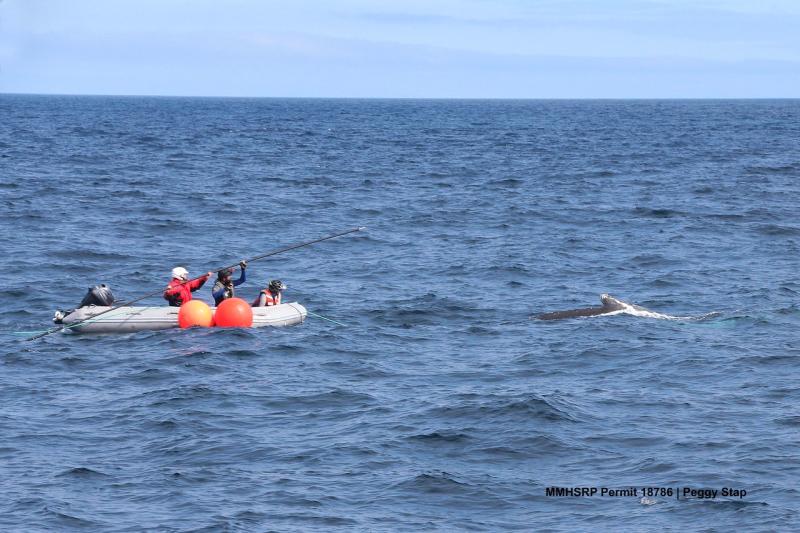 The hotline rings. A whale is in danger.

Fishermen report the location of a humpback tangled in tightly twisted fishing lines. An entanglement response team speeds to the coordinates to evaluate the situation. They must make a critical decision—act quickly to remove as much fishing gear as possible, or monitor closely and allow the whale to shed the gear without human intervention.

The stakes are high. A life hangs in the balance.

This scenario unfolded a few weeks ago off the coast of California. Fortunately, the whale was freed by trained and authorized responders using specialized tools.

Unfortunately, similar incidents are occurring more frequently. Within the last month, an 80-foot adult blue whale was seen near Orange County, California, dragging 200 feet of fishing line and buoys. Disentanglement teams attempted to cut away the gear but could not get close enough.

NOAA Fisheries National Entanglement Response Program Coordinator Jamison Smith and California Stranding Network Coordinator Justin Viezbicke confirmed the number of entanglement reports is steadily rising on the West Coast. It’s unclear how much of the increase is due to changes in ocean conditions, whale abundance and distribution, or patterns of human activity, and how much can be attributed to increased public reporting. The numbers are nonetheless cause for concern.

All Whales at Risk

Scar studies in U.S. waters show that 83 percent of all right whales and 70 percent of whales overall have been entangled in fishing gear or other marine debris at some point in their lives.

While these studies also reveal that whales can escape gear on their own, sometimes they cannot. Such encounters can be deadly. Fishing gear and debris can constrict and cut into a whale’s skin and muscle causing injury and potential infection. Gear and debris can also bind whales to fishing floats and buoys, making it harder for them to dive below the surface. If left unnoticed or unreported, the whale can suffer a long, agonizing death.

The best way to combat entanglements, according to Smith and Viezbicke, is to educate the fishing industry and general public on how to reduce entanglement risks through modifications to fishing gear and/or fishing techniques and how to properly report an entangled whale.

“The public needs to know how to report an entanglement case to their regional entanglement hotline,” said Smith. “That higher level of public understanding and reporting makes a huge difference. If more people know they can call someone to deal with these difficult situations, it greatly improves our response ability.”

Fishermen have been receptive to outreach efforts. “There’s been a lot more collaboration with fishermen than in the past,” said Smith. “Making sure fishermen are willing to communicate with us and educating them so they know what to look for and how to report an incident has been significant.”

And the fishing industry is doing more than just reporting. The Massachusetts Environmental Trust recently awarded a set of grants for new lobster fishery buoy lines engineered to break under the weight of a large whale. In California, the Dungeness Crab Working Group was formed to address entanglement issues within the fishery. They developed a best practices guide with NOAA’s West Coast Region to help crab fishermen reduce the risk of entanglements.

The West Coast Dungeness crab fishery is also required to mark their fishing gear for identification. This allows entanglement response teams to get back to the individual fisherman and understand the exact gear configuration and placement that may have led to a whale becoming entangled.

“The biggest challenge for us is when we find an animal that is not necessarily in the same location where it was initially entangled,” said Viezbicke. For example, response teams in Hawaii have found whales entangled in gear that had been set in Alaska. It’s important to know the different types of gear used, so NOAA Fisheries or the states can better understand the causes of entanglement and when necessary, propose regulations appropriately.

Smith and Viezbicke added that, although they are optimistic that fishing gear modifications will reduce the threat of future entanglements, it still takes years to test new gear and techniques and to assess the results. Timely reporting remains the most effective way to save a whale’s life.

So, if you see an entangled whale, who you gonna call? Your local Entanglement Hotline, of course.