“Dive Into the Issue”: Visualizing Climate Change with Melissa Karp

Explore how NOAA Fisheries’ new, interactive fisheries data portal shows how specific marine species’ locations have shifted over time, which may be in response to climate change. This tool can help us better understand and respond to these changes. 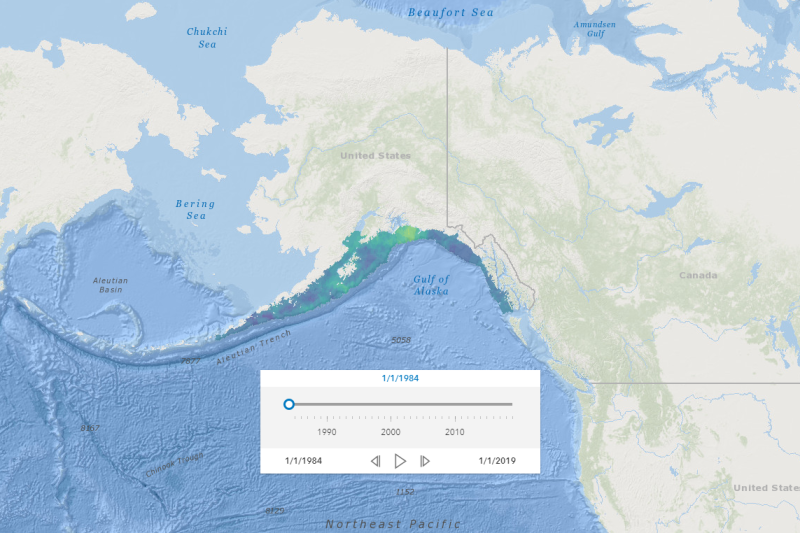 A visualization of the species richness (predicted number of species by location) from annual Gulf of Alaska survey trawl data.

Global warming impacts nearly every aspect of NOAA Fisheries’ conservation and management mission, including where marine species live in the ocean. As the ocean warms, some species adapt by moving into cooler and deeper water so they remain in their preferred water temperatures.

These changes in species distributions, or ranges, have implications for coastal and marine ecosystems, the fishing industry, and stock assessments and management. They can dramatically alter marine ecosystems—for example, by impacting interactions between species, affecting which species dominate an ecosystem. They also put stress on habitats and reduce biodiversity.

Changes in marine ecosystems can have big implications for the sustainability of U.S. fishing—commercial, recreational, and subsistence. Changes in species' distributions can also have social, cultural, and economic impacts on fishing-dependent communities. For example, if commercial species shift farther from home ports, it increases travel distance and costs for the commercial fishing industry. And when species move outside of standard survey boundaries, it can impact estimates of abundance that feed into stock assessments.

A new data visualization tool, the Distribution Mapping and Analysis Portal, or DisMAP, can help stakeholders like fishery managers and researchers understand and respond to changes in marine species' distributions. The portal uses NOAA Fisheries bottom trawl survey data—some dating back almost 50 years. Stakeholders can use the portal’s map-based visualizations to explore changes over time in the distributions of more than 800 different species of marine fish and invertebrates found throughout U.S. waters.

Explore how the data can help our stakeholders and partners safeguard America’s valuable marine resources and the communities that depend on them in this interview with the portal’s project lead, Melissa Karp.

This interview was condensed and edited for clarity.

Looking at the local level, how can this tool help us better understand climate change’s impacts on fishing communities?

Well, we know that we’re seeing climate change impacts now, and in our own lifetimes. My grandma, who lived to be 94, grew up in the same area that I grew up in, in the suburbs outside of Philadelphia. She told this story about ice skating on the Crum Creek when she was a kid. But at the end of the story, she would say, “nowadays that creek never freezes.” I think a lot of these observed environmental changes are being experienced by people through generational stories.

Similarly, fishing is often a very generational activity. You might think about a fisherman who always went to the same fishing spot when they were younger and caught tons of summer flounder. But as the years went on, they caught less. Now, when they take their grandkids to that fishing spot, they hardly catch any.

The tool can help us better understand what’s happening below the ocean’s surface in stories like this. Users can step back from these micro experiences to tell a bigger story about what’s happening on a larger scale, over time and space. They can see what potential climate-driven changes are happening in our ocean’s ecosystems. That fisherman can use the maps and tools in the portal to dive into why they might not be catching as much summer flounder in a given location anymore. One potential reason is that it has moved out of the area.

So we know that climate change is already impacting the nation’s valuable marine life and ecosystems. Have you noticed any broad trends in fish distribution changes while using the portal yourself?

Yes, definitely. Off the Northeast coast for example, you see a quite large northward move. Species have moved on average 29 miles in the fall and 37 miles in the spring since 1974. That might not seem like much, but that's an average across all species, so some species are moving much further than that. For instance, black sea bass and American lobster distributions have changed more drastically. In a couple of regions, like in the Gulf of Mexico and in the Gulf of Alaska, you don’t see species moving northward as much because they're limited by the Gulf and Aleutian islands coastlines. If a species is unable to move to its preferred water temperatures, it could negatively affect the species’ population numbers.

How can stakeholders use the tool to help increase the United States’ resilience to climate change?

For our fishery management partners, we're hoping the portal can provide them with detailed visuals of which species’ distributions are changing. Those data-backed visuals can help with decision-making, like allocating how many fish can be caught in a certain area, for instance.

We have a really cool area overlap analysis feature. Let’s take the fishermen from the story above. Using the area overlap tool, they can draw the area of their favorite fishing spot on the distribution map of summer flounder for example, and track how that species is moving in or out of that area of interest over time. It can help them answer questions like, “How much of the species is found in that area and how does it change over time?”

How can users connect visualizations of a species' distribution to actual climate change effects?

Right, the natural next question people are going to ask when something has changed is “why did this happen?” Currently, the portal does not provide information on the actual causes of a species distribution change. However, users are able to download data for their species of interest to explore outside the portal. After downloading data, researchers can focus on that species and quickly run their own analyses to dive into the issue. They might use the data to model the relationship between ocean conditions, like sea surface temperature, and where the species likes to live to explore the causes behind why a species’ distribution might be changing. In many cases, we know that climate change effects are large, but we need tools like this portal to help better understand what’s changing and why.

This is the first version of the portal. What features do you want to add?

We’re planning to add data from other surveys to map species distributions in additional regions like Hawaii and Canada. And we want to build a module that focuses on interactions among multiple marine species, or communities of species. We also plan to build a module that analyzes quantities of fish species available to fishing ports.

But in the nearer term, by the end of next year, we want to add projections of where species distributions might be in the future. To develop future projections, we need to model a species’ response to environmental conditions. For instance, a species might increase its abundance up to a certain sea surface temperature, and then its numbers start to decrease at higher temperatures.

Our staff and academic partners have developed species distribution models that use environmental conditions data, like temperature and salinity, to predict current and future distribution patterns. Once these are added to the portal, users will be able to see how species' distributions may change in the future. With more information on what may change, they’ll be better able to prepare for and respond to climate change impacts on these very valuable fisheries.