Outplanting places hundreds of juvenile abalone into their historic habitat. 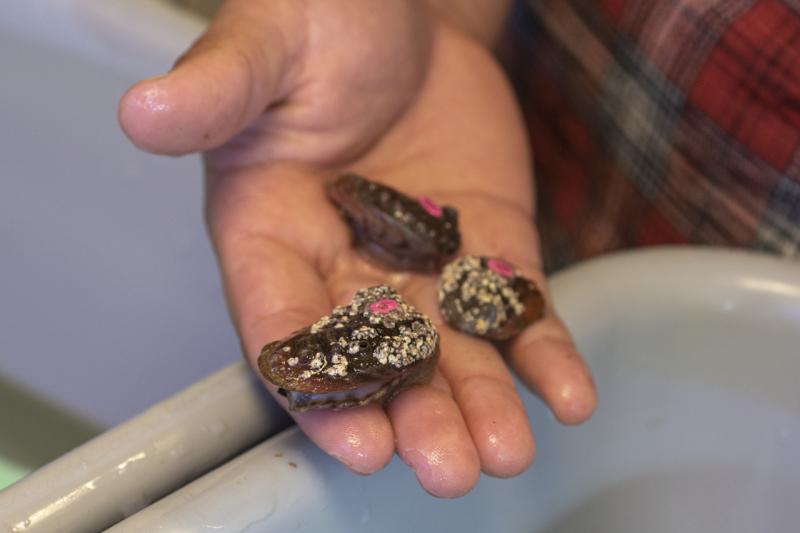 At 7 a.m. on November 18, a dedicated group of scientific divers gathered on a southern California dock, loading their gear in preparation for a day of diving. In addition to their tanks, wetsuits, and years of underwater research experience, they carried precious cargo – hundreds of juvenile white abalone grown in captivity and ready to be released into the ocean.

This marked the first release of endangered white abalone into the wild off southern California, a key recovery strategy for the native species. The release is a major step towards bringing white abalone back from the brink of extinction, and it happened thanks to the help of many highly skilled and supportive partners.

This marine snail that lives on rocky reefs as deep as 60 meters was once common along the coasts of southern California and Baja California. Their numbers declined dramatically, however, during a brief but intense commercial fishery during the 1970s. Now, the white abalone that remain in the ocean are too few and far apart to reproduce and recover the populations. 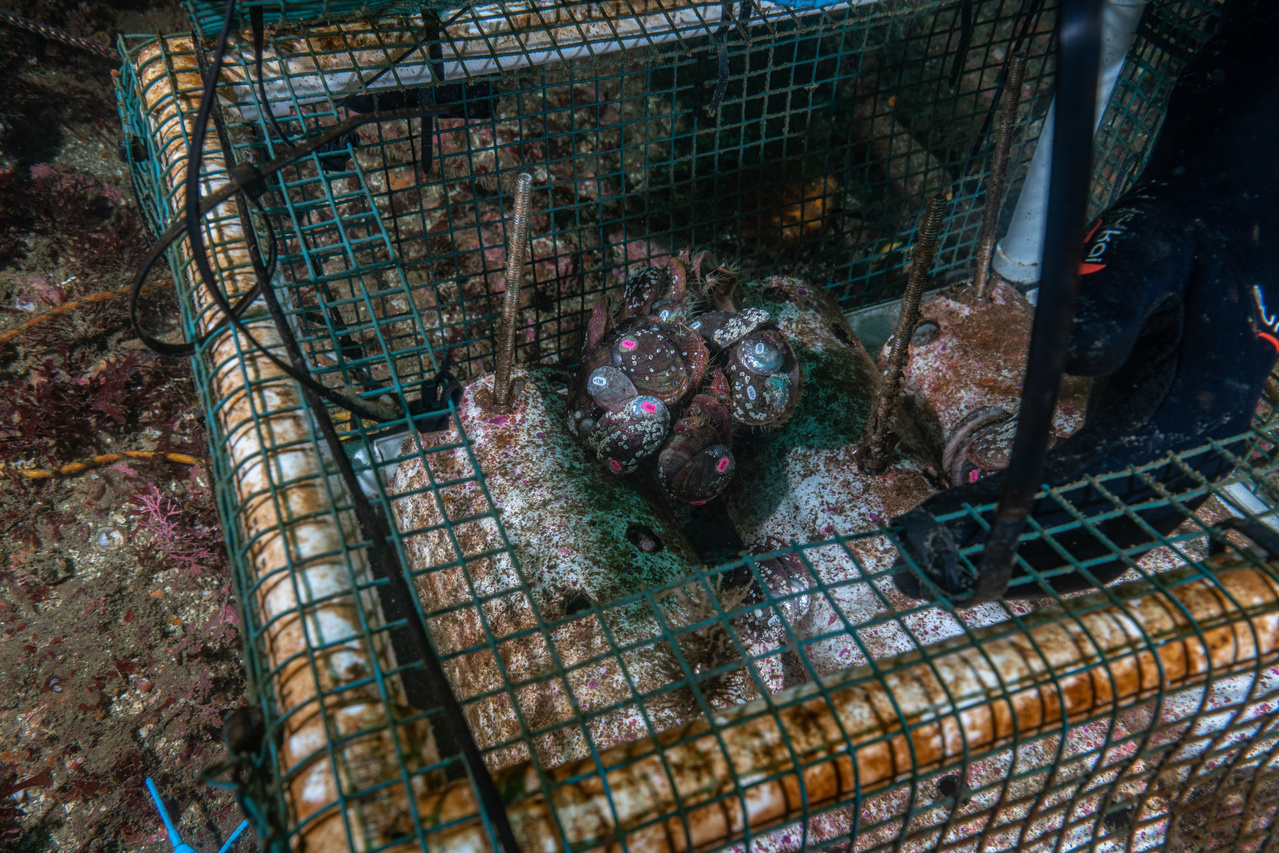 Juvenile white abalone in a box-shaped outplant module, made of PVC and mesh to protect the abalone. Each abalone is marked with a unique numbered tag, visible on the shell. Photo: Adam Obaza, Paua Marine Research Group.

“This milestone marks great excitement and optimism for the white abalone recovery program,” said Melissa Neuman, a fisheries biologist with NOAA Fisheries’ West Coast Region who has been leading federal recovery efforts since 2002. “Our team efforts have refined methods in captive breeding to the point where we now have thousands of young abalone to outplant to the wild. Our past experimentation with release methods for other abalone species gives us confidence that we will be successful.”

Since listing white abalone under the Endangered Species Act in 2001, NOAA Fisheries has worked with partners across the West Coast to recover the species. The white abalone captive breeding program led by the University of California Davis’ Bodega Marine Laboratory (BML) has produced and reared thousands of healthy white abalone in labs and aquaria throughout California. Now, some of those white abalone are ready to enter the ocean, where they will live, grow, and hopefully reestablish self-sustaining populations.

“Early on we knew that this species was really in danger of going extinct and that the only viable alternative to save it was starting a captive breeding program,” said Ian Taniguchi, a biologist with the California Department of Fish and Wildlife (CDFW) who has been involved in white abalone restoration since 1992. “The task at hand appeared to be a monumental challenge at the time and I am not sure if any of us fully believed that it was possible, but we had to try,” he said. 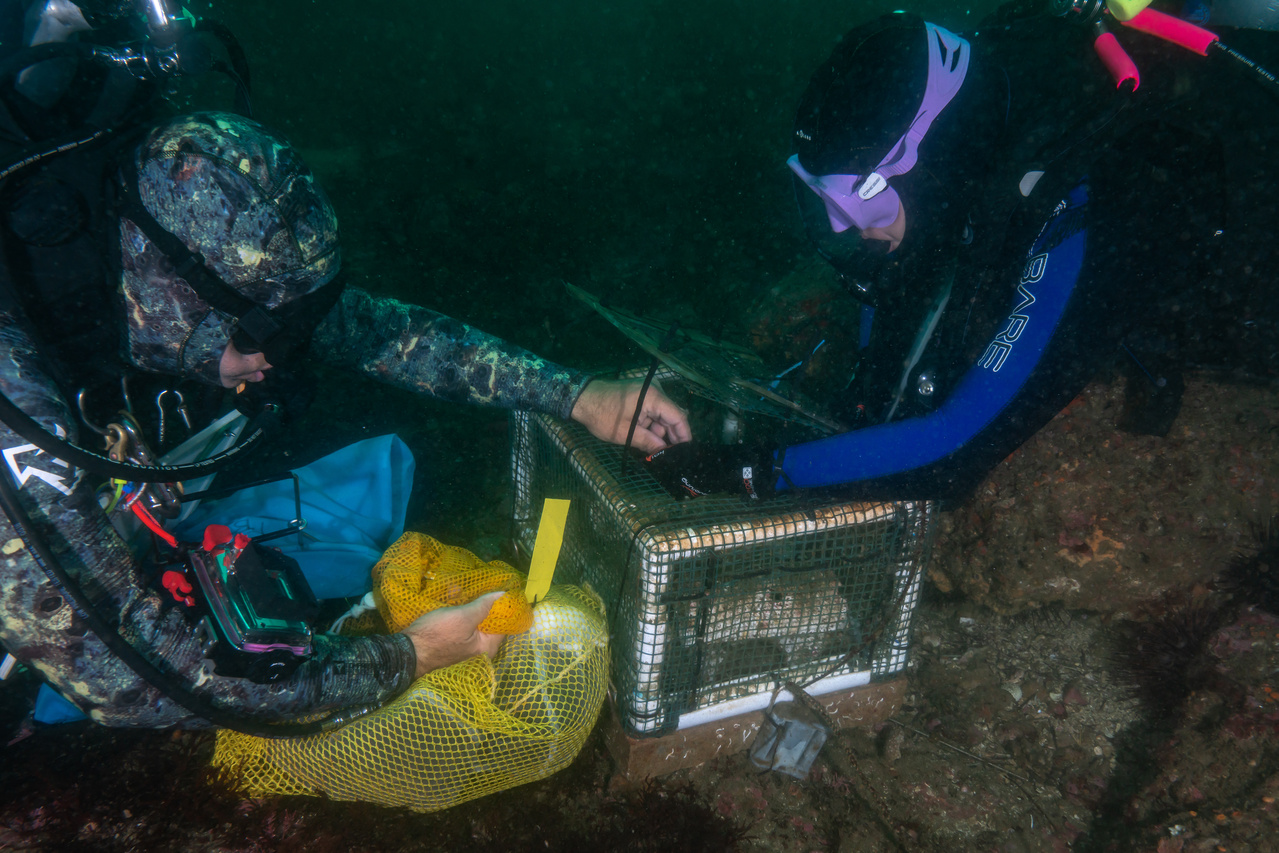 “Looking back at the progress we have made over the past 27 years that has led to this milestone moment, I truly think that it is possible to save this species from extinction,” Taniguchi said.

In August, thousands of juvenile white abalone from one to 3.5 inches in size made their way down the coast from BML, packed in coolers in the back of a vehicle. They arrived at holding facilities in southern California, where researchers prepared them for life in the ocean. Biologists measured and marked each one with a unique numbered tag glued to their shell to distinguish them from wild white abalone.

In November, scientific divers from NOAA Fisheries, CDFW, Paua Marine Research Group, The Bay Foundation, and the Aquarium of the Pacific transported coolers full of juvenile white abalone to two field sites. The divers placed about 800 white abalone into temporary homes that had been prepared for them, called outplant modules. The modules are made of PVC and mesh designed to protect the animals as they acclimate to ocean conditions.

Over the next few years, divers will regularly visit the sites to monitor the survival and growth of the abalone. Additional releases are planned at six-month intervals, with a goal of outplanting tens of thousands of juvenile white abalone over the next five years.

Outplanting white abalone to the wild is the only way to increase the wild population quickly and reduce the risk of extinction, biologists say. The lessons learned from these experimental outplantings will guide future, large-scale efforts to restore white abalone, a species that helped to support a multi-million dollar commercial and recreational fishery in California and plays an important role in maintaining healthy kelp forests.