What happens to a fishing community when it’s disrupted by marine heatwave-associated harmful algal bloom closures? 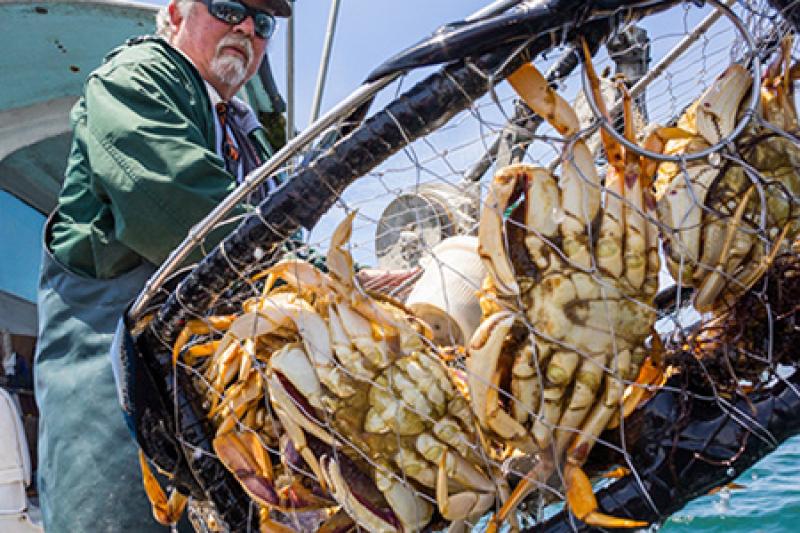 Fishermen contend with regulations, natural disasters, and the ups and downs of the stocks they fish, along with many other changes. As a result, fishing communities are quite resilient. That is, they can withstand, recover from, and adapt to change.

But how much pressure can they stand? The 2014–2016 North Pacific marine heatwave, known as the Blob, led to a harmful algal bloom of unprecedented scale. It necessitated substantial delays in the opening of the 2015–16 U.S. West Coast Dungeness crab fishery. The fishery is vital to West Coast communities. It produces around 26 percent of all annual fishing revenue and supports more than 30 percent of all commercial fishing vessels.

Previous studies have documented the devastating economic impacts from the 2015–16 event on Dungeness crab fishermen. Members of affected coastal communities attest that these socioeconomic effects rippled through associated industries and coastal communities. But can changes in fishing practices in response to this significant climate shock be quantified?

"We wanted to examine the extent to which the Dungeness crab fishery delays affected participation in other fisheries, and the duration of those changes," said Mary Fisher, a doctoral student at the University of Washington. Fisher did the work as a National Science Foundation Graduate Research Internship Program Fellow at NOAA's Northwest Fisheries Science Center.

Fisher and her colleagues at NOAA Fisheries, University of Washington, and Oregon State University studied the impacts on more than 2,500 vessels across seven California fishing communities. The researchers wanted to see how a climate-related shock (like the heatwave and associated harmful algal bloom) can impact communities' use of ocean resources.

The researchers used 10 years of fishery landings data to map resource use networks for seven California port groups where Dungeness crab is an important revenue source. The networks visualize the portfolio of fisheries that a community harvests and how vessels move between fisheries. The network visualization is similar to a food web, except that the connections represent harvest by fishing vessels rather than predator-prey relationships.

Researchers found that 71 percent of California Dungeness crab fishing vessels temporarily left the industry and stopped fishing altogether during the delays. The two other strategies that fishermen used to cope with the disruption were:

These communities, located in central California, were less dependent on Dungeness crab and had shorter fishery delays. In these communities, fishermen had access to more open fisheries during the winter months and were more flexible in how they fished previously. These characteristics provided more options, buffering fishermen from the disruption to the Dungeness crab fishing season.

No matter how central Dungeness crab was to a community's fisheries portfolio, the researchers didn't observe any significant, lasting changes in how vessels participated in fisheries after the closures lifted. This suggests fishing communities may mostly return to "normal" fishing practices relatively quickly after short-term disturbances like climate shocks, provided those changes don't pile up one after the other.

The results highlight the importance of nearshore groundfish fisheries like sablefish, rockfish, and lingcod as alternatives to the Dungeness crab fishery. "Most of the crab vessels that stayed out on the water were using pot or hook-and-line gear to fish groundfish," says Fisher. "I think we can expect access to these fisheries to continue to be important during crab season delays."

Fishermen with larger vessels also landed their catch at different ports, a strategy less common among smaller vessels. This was possible in part because regulations only restricted fishing in delayed areas at the district level. In 2018, the California Department of Fish and Wildlife amended these rules, called the Fair Start Provisions. The amendments provide more protection to fishermen at a finer scale than districts in the event of future delays.