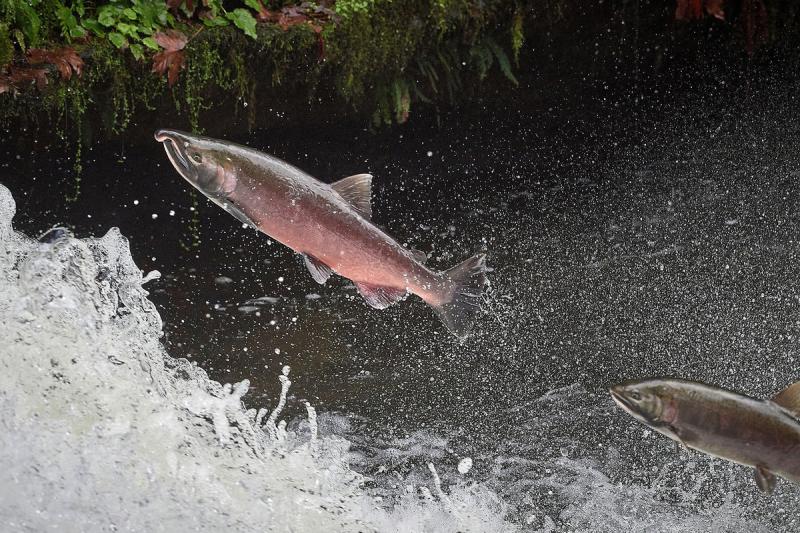 Four threatened species of salmon and steelhead on the lower Columbia River should retain their current listing statuses under the Endangered Species Act (ESA), NOAA Fisheries has determined.Threatened Oregon Coast coho salmon and threatened Lake Ozette sockeye salmon should also retain their current statuses. The agency’s West Coast Region released 5-year reviews that weighed the progress of the six species toward recovery and recommended priority actions for the next 5 years.

The reviews are the latest 5-year check-ins on the ESA listing status of 28 threatened and endangered West Coast salmon and steelhead species. NOAA Fisheries expects to complete the reviews in the next several months.

Most of the species lack sufficient access to functional floodplain habitat, the reviews found. Where rivers can reach their floodplains, high seasonal river flows can turn low-lying lands along rivers into productive wetlands. Juvenile salmon feed and grow there on their way to the ocean. Dikes, levees, and rip-rap that isolate rivers from their floodplains eliminate that opportunity. That leaves the juvenile fish in simplified channels with less hiding cover and prey. Floodplains and wetlands also absorb cool water and then gradually release it back into rivers, which will be increasingly important as the climate warms.

The highest-priority recommendations of the 5-year reviews for five of the six species include reopening and restoring this valuable floodplain habitat to support salmon recovery.

Four species of threatened salmon and steelhead in the lower Columbia River also face risks from deteriorated water quality and barriers blocking access to spawning habitat. For example, dams on the Lewis River in southwest Washington keep spring Chinook salmon from reaching the healthiest habitat. The reviews recommend reestablishing and improving fish passage on the Lewis and Cowlitz Rivers for Chinook salmon.

“Those barriers will be essential to address to move these species closer to recovery,” said Bonnie Shorin, a recovery coordinator who worked on the reviews. “High-quality habitat can be an important asset for recovery, but the fish have to be able to reach it.”

They also call for restoring spawning and rearing habitat, especially for Lower Columbia chum and fall Chinook salmon. The reviews recognize progress in restoring some of the habitat that juvenile salmon need as they migrate through the Columbia River estuary to the ocean. For example, partners reopened almost 1,000 acres of floodplain habitat in Steigerwald National Wildlife Refuge near Washougal, Washington. It will provide important habitat for juvenile salmon to feed and grow, improving their odds of survival when they reach the ocean. The restoration efforts also offer new opportunities for recreation and wildlife watching.

“Oregon Coast coho weathered some challenging years well and are still ahead of where they were 10 years ago,” said Lance Kruzic, a fisheries biologist who led the review for the species. “The robust fishing opportunities of the last few years demonstrate how much these fish can contribute to the coastal economy and quality of life. We are on the right track to reach recovery, but there is more work to do to get there.”

The review of Oregon Coast coho also recognizes progress in reducing the impacts of hatchery fish on naturally spawning populations. Most hatchery programs have been phased out, reducing releases from millions of fish decades ago to only about 260,000 each year now. Wild fish now make up more than 95 percent of most populations, improving their productivity and resilience against risks such as climate change.

The resilience of those naturally spawning fish demonstrates that recovery is within reach for the species, the review found. However, coho spend a year growing in freshwater rivers before migrating to the ocean. That can make them vulnerable to high temperatures and drought exacerbated by climate change and may test their resilience.

Historic new agreements have paved the way for updates in state logging practices that will also benefit salmon in the long-term. Oregon Coast coho have already benefited from more than 200 habitat restoration projects. These efforts have provided access to long-blocked habitats and enhanced and expanded high quality rearing habitats for young fish.

The review recommends continuing those initiatives and expanding restoration of juvenile nursery habitat in floodplains, for instance. It also suggests developing beaver conservation plans where there is local support. That would harness nature’s engineers to create wetland habitat ideal for juvenile coho salmon.

“There is increasing resolve that we know what Oregon Coast coho need to reach recovery, and this review will help further focus efforts,” said Irma Lagomarsino, who has represented NOAA Fisheries on the Tidegate Partnership and promoted other recovery efforts.

Ozette Lake sockeye salmon are a small but distinct population of sockeye salmon in Ozette Lake and the Ozette River on the Olympic Peninsula in Washington. They were listed as threatened in 1999. Their spawning habitat is largely within Olympic National Park, which helps protect their habitat from development. The population has increased slightly since the last review in 2016 and generally over the last 15 years, but may now be entering a negative phase, the review said.

A conservation hatchery program has helped improve the diversity of the population and may have stabilized or even increased its abundance. However, more needs to be done, the review found. The population also faces risk from climate change, invasive species, and shifting conditions in their lake spawning habitat, such as low dissolved oxygen and encroaching upland vegetation.

As with other species, the review recommends restoring spawning habitat. For Ozette Lake sockeye, that includes removing vegetation encroaching on beaches where the sockeye spawn. The review also calls for studying the possibility of planting sockeye eggs on spawning beaches within Olympic National Park to promote recolonization of the habitat.