A trained team freed an entangled humpback whale near Tatoosh Island at the tip of Washington’s Olympic Peninsula Thursday night, removing ropes that had hog-tied the whale between its mouth and tail. 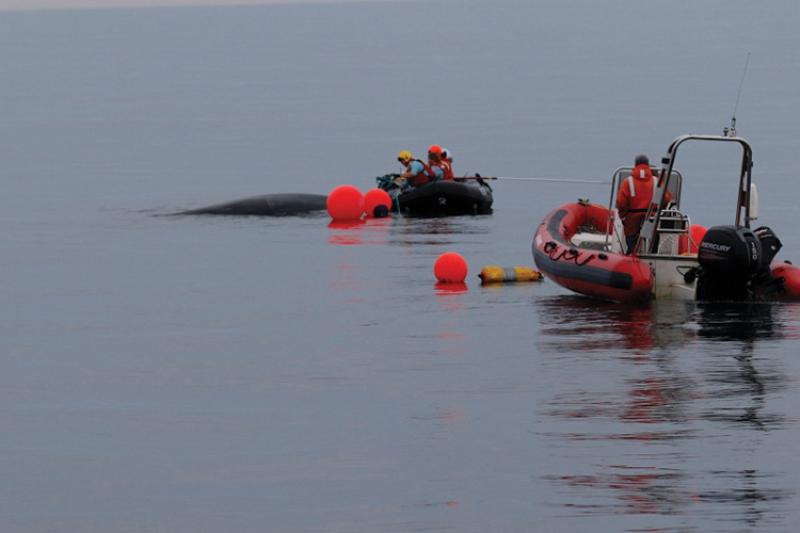 The entangled whale was first reported just before noon Thursday, August 8, by Todd’s Extreme Fishing. He stayed with the whale to monitor its location until the Makah Tribe and U.S. Coast Guard arrived to take over the watch. This assistance was essential in keeping track of the whale’s condition and location while a response team mobilized and arrived on the scene.

“They did exactly the right thing by keeping their distance and watching the whale so the team could quickly find it,” said Kristin Wilkinson, regional coordinator of NOAA Fisheries’ Pacific Northwest Large Whale Entanglement Response Network.

The response team included members from SR3: Sealife Response, Rehabilitation, and Research; Cascadia Research Collective; the Makah Tribe; Washington Department of Fish and Wildlife; and World Vets. Response teams must complete extensive training and work under a NOAA Fisheries permit because disentangling large whales can be difficult and dangerous.

Untangling the whale was complicated because ropes running between its mouth and tail had left it hogtied at the surface, said Doug Sandilands of SR3, who helped lead the response. It was unclear whether the ropes had been attached to a crab trap or other fishing gear.

The team cut the ropes at key points to remove almost all the line except for a small section that remained in the whale’s mouth—likely to fall out on its own.

The whale appeared to be in good condition and was swimming normally after the team removed the ropes.

Anyone spotting an entangled whale should report it to NOAA Fisheries’ 24/7 hotline by calling (877) SOS-WHALE (877-767-9425) or hailing the U.S. Coast Guard on VHF Channel 16. Please stay with the whale as long as it is safe to do so, but never attempt disentanglement or remove any gear without training and authorization. Please try to get video or photos showing the entangling gear but remember to stay 100 yards from the whale and watch for lines in the water.