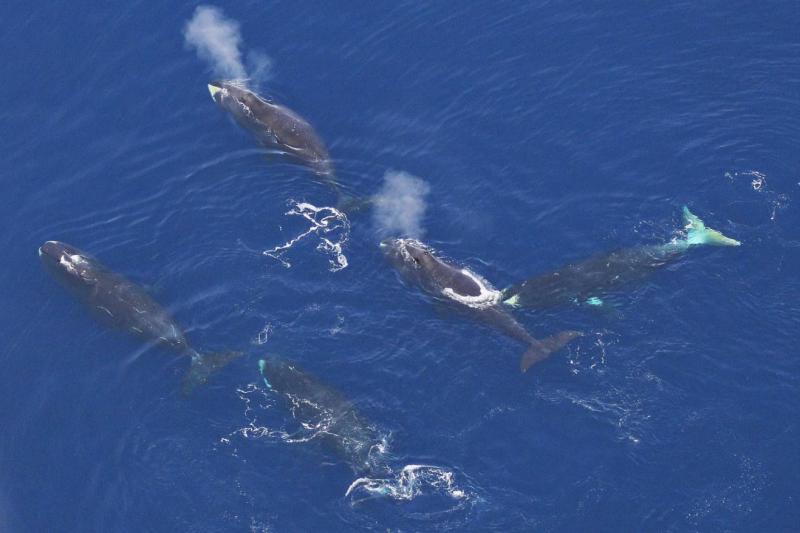 For the first time, scientists have direct evidence that killer whales are preying on bowhead whales in the U.S. Pacific Arctic. A dramatic loss of sea ice in recent years may be leaving bowheads more vulnerable to killer whale predation.

"Until now, bowhead whales in the U.S. Pacific Arctic were thought to experience minimal predation pressure from killer whales. Our study suggests that is no longer the case,” said Amy Willoughby, the NOAA Fisheries Affiliate/University of Washington scientist who led the research. “We now know that during 2009–2018, killer whale predation was the primary cause of death observed for bowhead whales in the region.”

The new study is the first to examine non-harvest mortality of bowhead whales in the U.S. Pacific Arctic (northeastern Chukchi Sea and western Beaufort Sea). This collaborative research provides multi-year evidence of killer whale predation on bowhead whales in this region.

Bowhead whales are vital nutritional, spiritual, and cultural resources for 11 Alaska Native whaling communities that hunt them for subsistence. These communities are located where bowhead whales come closest to the Alaskan shore on their spring and autumn migrations. Understanding how environmental changes influence bowhead whale mortality and behavior is vital for these communities to prepare for the future as the Arctic continues to warm.

Before it was stopped in the early 1900s, commercial whaling brought bowhead whales to near extinction. Though still endangered, the western Arctic bowhead population has recovered considerably. It supports a subsistence harvest under co-management by NOAA Fisheries and Alaska Native organizations.

Understanding mortality is essential to effectively manage and conserve endangered bowhead whales. Scientists need to know the number and cause of deaths, and what threats may lead to future mortality.

Of all great whales, the bowhead is most adapted to Arctic life. Bowheads live almost exclusively in seasonally ice-covered seas. Thick blubber insulates them from freezing temperatures. Their massive skulls are icebreakers: Alaska Native whalers have reported bowheads surfacing through 2 feet of solid ice.

In recent years, unprecedented warming and loss of sea ice has been rapidly transforming the Pacific Arctic ecosystem. Understanding how these changes influence bowhead mortality and behavior is crucial for effective management. It is vital for Alaska Native subsistence whaling communities that are preparing for and adapting to change.

“Sea ice extent during the summer and autumn in the eastern Chukchi and western Beaufort seas has declined dramatically in recent years. In this region there has also been earlier seasonal sea ice melting, later seasonal sea ice freeze-up, and thinner sea ice,” Willoughby said.

“Arctic killer whales don't like sea ice, unlike those in Antarctic waters. Once the bowheads get into the ice, they're safe from killer predation,” said bowhead expert Craig George, retired senior biologist at the North Slope Borough Department of Wildlife Management in Utqiaġvik, Alaska (formerly Barrow).

“The reduction of summer and autumn sea ice may mean bowhead whales can no longer avoid predators by escaping into thick ice,” Willoughby.

In 2009, the Aerial Surveys of Arctic Marine Mammals (ASAMM) project, funded by the Bureau of Ocean Energy Management and implemented by NOAA Fisheries, began photo-documenting whale carcasses. Images of bowhead whale carcasses were sent to experts at the North Slope Borough to determine the cause of death.

“In a nutshell, forensic examination is about making sense of the tale of the dead.

Killer whales are remarkable hunters of diverse marine prey. They use variable hunting strategies, either cooperative or as individuals, depending on the prey type. Much of what we know about the hunting techniques of killer whales on baleen whales and the resulting bodily injuries has been informed by eyewitness reports of killer whale attacks from indigenous hunters, biologists, and commercial whalers.

When examining photos as we did in this case, one follows the trail of evidence by assessing the key forensic signs. We look at the type of injury, bite characteristics, and bodily location to determine if the evidence at hand is consistent with killer whale predation. Sometimes there is no doubt given the extent of external injuries such as missing jaws, missing tongue, semi-circular bite marks, or rake marks. In other cases no conclusion can be reached and the cause of death remains a mystery.”

In 2015, the team analyzed a photo that yielded conclusive evidence. A photographed carcass of a bowhead whale calf showed killer whale rake marks on its flipper, and injuries to its jaw and mouth.

Observations suggest that killer whales have begun only in recent years to prey on bowhead whales in the U.S. Pacific Arctic. Successful predation by killer whales on bowheads in eastern Chukchi and western Beaufort seas study areas had not been documented by scientific research or indigenous ecological knowledge before this study.

Killer whale predation on gray whales in the U.S. Pacific Arctic had been well established through direct observations of attacks and necropsies of beached gray whales. Predation on bowheads in Russia and other locations along their migratory route had been previously documented. Killer whale scars were observed on bowhead whales harvested in the Alaskan Arctic. However, those bowheads had survived, and there was no way of knowing where the attacks took place.

Although the ASAMM survey team began photographing bowhead carcasses in only 2009, 30 prior years of visual ASAMM surveys showed no evidence of killer whale attacks on live bowheads. The first sighting of killer whales by the team occurred in 2012.

“We have been monitoring scars on harvested bowheads for 35 years. We noted scars from killer whale attacks, line entanglement, and ship strikes. We knew bowheads were attacked by killer whales. Native hunters on St. Lawrence island, Alaska, had reported bowhead carcasses likely killed by killer whales. But we had no evidence of successful predation within the eastern Chukchi and western Beaufort seas. However, for decades we found dead gray whales that were victims of killer whale attacks along the U.S. Chukchi coast,” said George. “We now have direct evidence of killer whales taking bowheads in U.S. Arctic waters over the last 10 years.”

Looking Toward the Future in a Changing Arctic

“We don’t yet know what the long-term effects of killer whale predation on bowhead whales will be,” said Willoughby.

But Willoughby sees a number of potential implications for Western Arctic bowhead whales and the subsistence communities that were built around them.

Along with removing bowhead whales from the population, killer whale predation pressure could influence bowhead whale behavior. It might force bowhead whales to migrate farther offshore, or they could stay close to the coastline in shallow water. The presence of killer whales could disrupt feeding opportunities for bowhead whales. Or bowheads may not be substantially affected at all.

“Gray whales are common in the northeastern Chukchi Sea, and more recently, fin and humpback whales appear to be moving farther north into the Arctic. Killer whales may target these species instead,” said Willoughby.

As the Arctic continues to warm, other factors may have an increasing impact.

“As sea ice melts, marine traffic and commercial fishing is expected to increase in these waters. That could further impact bowhead whales in this region. Warming may also affect bowhead whale food sources or other biological functions,” said Willoughby. “Our study provides insight for interpreting future information on bowhead whale mortality and causes of death.”

The next step in the project is to analyze photos from 2019, the final survey year for the project.

“Preliminary results suggest that 2019, one of the lightest ice years we’ve seen during these surveys, had the highest predation yet,” said Willoughby. “In the future we hope to be able to continue aerial surveys. As climate changes progress it will be increasingly important to monitor the ecological impacts of this apex predator in the U.S. Pacific Arctic.”

This research was a collaborative effort by NOAA Fisheries’ Alaska Fisheries Science Center (Amy Willoughby, Megan Ferguson, Janet Clarke, Amelia Brower); the University of Washington Joint Institute for the Study of the Atmosphere and Ocean (Willoughby, Clarke, Brower); the University of Washington School of Fishery and Aquatic Sciences (Ferguson); the North Slope Borough Department of Wildlife Management (Raphaela Stimmelmayr); the University of Alaska Fairbanks Institute of Arctic Biology (Stimmelmayr). Funding was provided by the Bureau of Ocean Energy Management and the Alaska Fisheries Science Center.

Arctic Currents: A Year in the Life of the Bowhead Whale