Keeping Boats on the Water

The Fishery Regulation Assessment Model helps managers evaluate and recommend annual harvest allocations in fisheries up and down the U.S. West Coast. NOAA scientists and managers worked with the Washington Department of Fish and Wildlife and industry representatives to provide genetic data in support of a recalibration effort aimed at improving the model and better understanding harvest impacts throughout the region. Results indicated at least one sensitive stock was encountered at lower rates than previously thought. 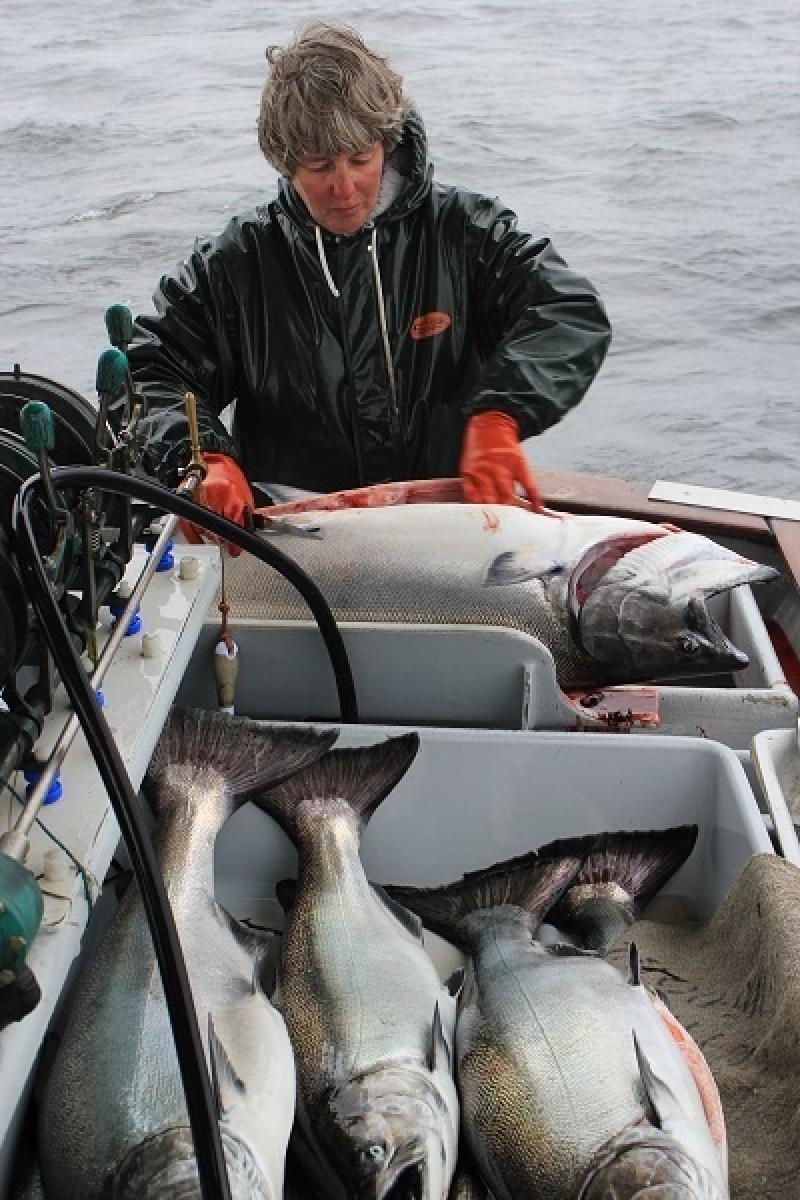 Whose Fish Are They?

Salmon are highly migratory—they don’t just stay in one place. They also don’t care where the U.S.–Canada border is, or where Oregon ends and Washington begins, traveling freely among these waters throughout their lives. And yet the people who live in these places all want a shot at catching them. So how do we decide, among all the competing groups of hungry humans, who gets to harvest salmon?

Enter the Fishery Regulation Assessment Model. The FRAM helps managers like the Pacific Fishery Management Council allocate harvest by predicting abundance and exploitation rates in individual West Coast fisheries. It’s a complex model that analyzes which stocks are present, in what numbers, and where. And then management takes into account various laws and regulations (like the Endangered Species Act, the Magnuson–Stevens Act, and international treaty obligations, including tribal) and determines how to divide up the fish.

Think of it like slicing a pie into ever-smaller pieces. As Paul Moran, a research geneticist at the Northwest Fisheries Science Center, explained: “You start out at the international level: allocation between the U.S. and Canada. Then within the U.S., you’re gonna divide it between tribal and non-tribal. And then between harvest and recreational. And then between early-season harvest and late-season. And then between management areas. And at each one of these steps, you have to ask: ‘How many fish are likely to be in this area? How many can we allow to be harvested? Which stocks will be impacted?’”

Moran is the lead author of an article recently published in Fisheries Magazine that shows how genetic analysis of fish at sea was used to improve the FRAM, potentially leading to more accurate harvest allocation for sustainable fishing of healthy, abundant stocks while reducing impacts to threatened or endangered stocks.

Stock Composition and the FRAM

To know which fish are where, we need to survey them. Traditionally, scientists and fishery managers used coded-wire tags inserted into the snouts of juvenile hatchery salmon. When the fish are caught, the tags are sent to a lab and analyzed to determine their origin and learn more about fish distribution, migration patterns, and abundance. The FRAM uses this information to estimate stock-specific harvest exploitation rates.

Meanwhile, geneticists like Moran have been working for decades developing and refining a technique called genetic stock identification. With genetic analysis, any fish can be analyzed at any point in its life cycle, not just those fish that were originally tagged as juveniles.

“All the coastwide salmon labs cooperated to develop a really powerful set of genetic markers,” he explained. “We standardized our data collection procedures and created a combined genetic repository that includes tens of thousands of known-origin samples.” When salmon are harvested at sea, a fin clip can be analyzed genetically and compared against this repository to identify the fish’s origin.

“You can take an individual fish at sea and say with extreme confidence, among 40 different genetic groups, ‘This fish came from the Fraser River or the Columbia or the Sacramento.’ It’s just amazing,” Moran said.

Good News for the Fishery

In their article, Moran and his coauthors describe their analysis of over 5,000 samples sent in by fishers in cooperation with the Washington Trollers Association. According to their findings, the stock composition of this fishery differs from that predicted by the FRAM in several important ways. For example, the genetic analysis found that populations of mid-Oregon coast Chinook salmon—which the FRAM had previously thought to be negligible—actually contributed nearly one-third of 2012 harvest in some areas.

“That’s a signal to the modelers,” Moran said, “to go in and figure out why. Did we miss something in the coded-wire tag recoveries? Is there something missing from our model?” Subsequent review of coded-wire-tag recoveries supported the genetic results, leading to additional scrutiny of the FRAM.

The study also found that the Columbia River tule, a threatened Chinook population that is a limiting stock for the entire fishery, is actually caught in lower numbers than previously thought. According to the genetic analysis, “No matter how you divided up the fishery, in almost every single time/area slice that we looked at, the proportional estimates were consistently much lower” than those estimated by the FRAM, Moran said.

So fewer of these ESA-listed fish are being caught than previously thought. That would seem to be good news for the entire fishery.

Moran did, however, caution against jumping to conclusions about what this might mean. “These are exploitation rates combined with abundance,” he stressed. “So in FRAM, maybe the tule stock abundance was too high, or the exploitation rate was too high. We don’t know which, and it certainly matters for harvest management. But whatever the explanation, the discrepancy draws attention to the issue. Now we can drill down and focus on why.”

So what does all this mean for fishing communities that rely on making a living from the sea? Until now, given the estimates provided by the FRAM, managers had to set strict harvest limits in areas where they thought sensitive stocks were present and harvested at high levels.

As Moran explained, “The problem is, if they don’t know what’s going on, managers are obligated to use a precautionary approach. So they’re going to have to limit production, limit harvest—limit opportunities.”

“This is the goal of modern fishery management,” he continued, “avoiding impacts on sensitive stocks. If we can understand the stock-specific impacts, then we can fish closer to the sustainable limit. And we don’t have to exercise the same level of precaution.”

By better understanding the composition and abundance of species within the fishery, managers are able to set limits that better reflect the actual numbers of fish at sea. And in some cases, that might mean increased harvest opportunities.

Moran smiled. “Keeping boats on the water. That’s what it’s all about.”