A NOAA-supported project in Traverse City, Michigan, is helping enhance habitat and food sources for fish like brook trout. 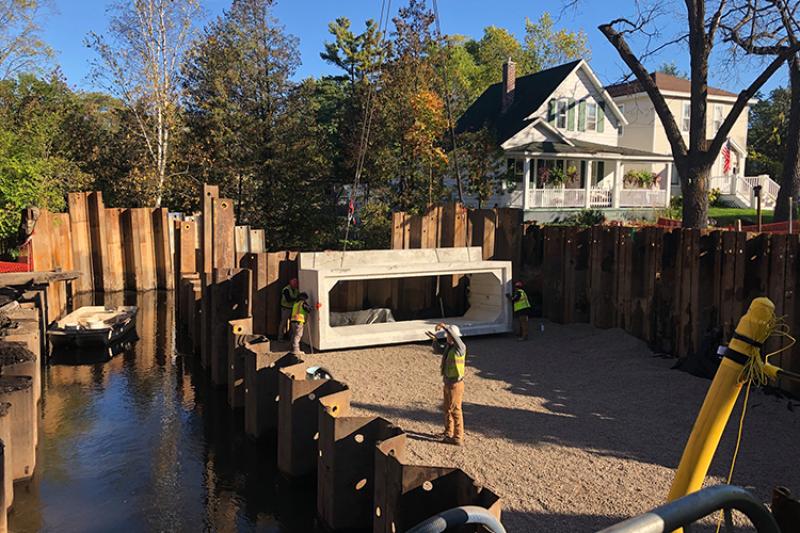 NOAA’s partners at The Watershed Center Grand Traverse Bay recently completed a project to restore habitat and improve fish passage on Kids Creek in Traverse City, Michigan. The effort received more than $1.5 million in NOAA funding through the Great Lakes Restoration Initiative. Through this work, our partners are helping enhance habitat and food sources for fish species such as brook trout.

Kids Creek is on Michigan’s Impaired Waters List, due to a decline in macroinvertebrates—small aquatic animals such as snails, worms, and insect larvae. Sediment and stormwater runoff have led to a loss of macroinvertebrate habitat, causing a decrease in their populations. Macroinvertebrates provide an important food source for brook trout and other fish species. Without proper habitat to support a healthy macroinvertebrate population, the fish populations that depend on them cannot thrive.

In addition to a lack of macroinvertebrate habitat, portions of the creek are filled in with sand or contain structures that impede water flow. This makes it difficult for migrating fish to access their habitat, and causes the project area to flood frequently.

Since 2018, NOAA has supported work to restore Kids Creek and remove it from the list of impaired waterways. This work has included replacing a series of three undersized culverts with appropriately sized structures. This will help restore the natural function of the stream, reducing sedimentation and providing a stable environment for fish and macroinvertebrates. It will also improve fish passage for existing brook trout populations. Close to 4,000 feet of the creek is expected to benefit from this work.

The project is led by The Watershed Center Grand Traverse Bay and supported by NOAA. Additional partners on this effort include:

Since 2010, the Office of Habitat Conservation’s Restoration Center has worked through the Great Lakes Restoration Initiative to restore habitat across the Great Lakes region. We have supported 85 projects, restored more than 4,600 acres of habitat for fish and wildlife, and opened up almost 500 miles of rivers and streams to fish migration through GLRI. This work has helped strengthen valuable Great Lakes fisheries, restore coastal wetlands that improve water quality, and provide recreational opportunities for the public’s use and enjoyment.

Last updated by Office of Habitat Conservation on December 21, 2022