Laying the Groundwork for Long-Term Restoration: A Look Back at the Recovery Act—Part 3

Habitat restoration efforts initiated through the American Recovery and Reinvestment Act of 2009 helped build the foundation for work that continues today. 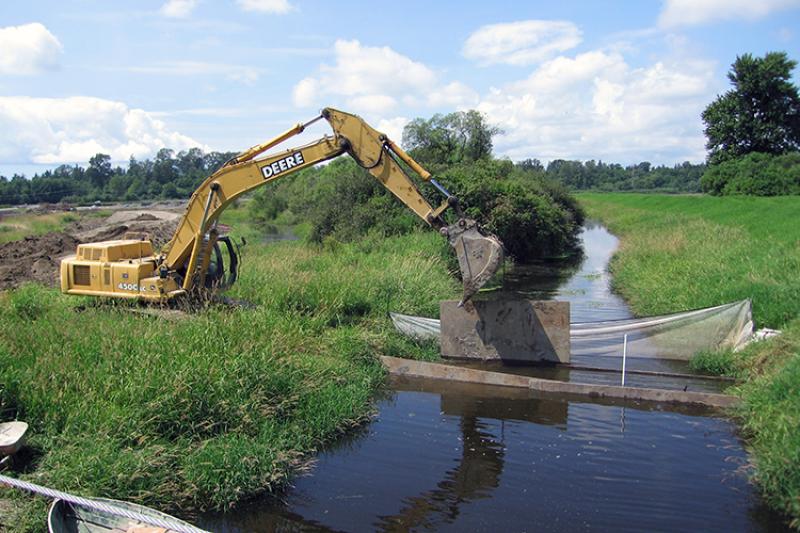 Through the American Recovery and Reinvestment Act of 2009, NOAA funded 125 habitat restoration projects in coastal areas throughout the country. Now, more than a decade later, we’re taking a look back at some of the projects we funded. We’ll explore the benefits this restoration work continues to bring to communities and ecosystems across the country. In Part 3 of this 3-part series, we’re highlighting examples of how Recovery Act projects laid the groundwork for continuing habitat restoration efforts.

Part 1 focused on community benefits like jobs and recreation, and Part 2 explored benefits to migratory fish and other coastal and marine species.

NOAA received $167 million from the Recovery Act to restore coastal habitat and help jumpstart the nation’s economy. We established 50 cooperative agreements that funded 125 high quality habitat restoration projects in 24 states and territories. They spanned from New England’s salt marshes to the coral reefs of the Pacific Islands.

We worked with dozens of partners across the country to reopen historic river habitat, remove marine debris, reconnect tidal wetlands, and restore shellfish and coral reefs. Many of these projects kick-started restoration efforts and collaborative partnerships that have lasted for years.

In California, one of the challenges facing endangered coho salmon and threatened steelhead trout is low levels of water in coastal streams. In this Mediterranean climate, streams often get plenty of water during rainy winter months, but water levels can decrease dramatically or even dry up during the summer months. This lack of water threatens the juvenile salmon and steelhead that rely on these streams throughout the summer.

The project supported construction of nine rainwater catchment systems: seven residential systems, a large agricultural system, and a system for the Bodega Volunteer Fire Department. Together, these systems created a total capacity of 497,000 gallons. They reduce the amount of water pulled from Salmon Creek, and provide a stable source of available water for project participants and the town of Bodega.

“The initial funding we received from NOAA was crucial, not only for implementing much-needed water conservation work in Salmon Creek, but also to launch our larger streamflow enhancement program,” said John Green, project manager with Gold Ridge RCD. “As part of that program, we have been building water conservation projects for the past decade in Salmon Creek, as well as Dutch Bill and Green Valley Creeks, both important salmon habitat streams in the Russian River watershed.”

The Skagit River estuary—part of Washington’s Puget Sound—provides important habitat for many species of salmon and steelhead, including threatened Puget Sound Chinook salmon. The region’s estuary and tidal marsh habitats provide critical areas for juvenile fish to feed, rest, and grow before migrating to the ocean. But the estuary has lost more than 70 percent of its historic tidal wetlands since the 1800s, limiting the recovery of these vulnerable species.

In addition to providing much-needed habitat for fish, the Skagit River region supports a thriving agricultural community. For farmers and residents, however, flooding poses a persistent problem. Aging dikes and drainage systems built in the 1930s are not always sufficient to protect the community from floods. Through a Recovery Act-funded effort, NOAA and partners were able to collaborate on habitat restoration that led to benefits for fish, farmers, and flood control.

NOAA worked with The Nature Conservancy, Skagit County Dike District 3 and Drainage District 17, and many other partners. Together, they restored 56 acres of marsh habitat in Fisher Slough, located within the Skagit River estuary. The project replaced old floodgates, updated drainage infrastructure, and rebuilt levees to restore natural tides to the marsh. With the tides restored, five times more area is now available for salmon habitat. Ten times as many juvenile Chinook have been observed in Fisher Slough. And the area provides almost five times as much flood storage capacity, reducing the risk of flood damage and drainage maintenance costs on neighboring agricultural lands.

By establishing equal goals for restoration and agricultural protection, the effort built new, non-traditional partnerships between the salmon recovery, agricultural, and flood risk reduction communities. The success of this ground-breaking effort led to the creation of the Farms, Fish, Flood Initiative. This regional partnership in the Skagit River is looking at where future, multi-benefit projects could be located.

NOAA and partners have used the experience gained on this project to help build other collaborative, multi-benefit projects. For example, the restoration of Fir Island Farm, also located in the Skagit River region, directly benefited from lessons learned through Fisher Slough. The Fir Island Farm project restored 131 acres of tidal marsh and channels, with the capacity to support more than 60,000 juvenile Chinook. The effort also installed new infrastructure that protects agricultural lands from increased coastal flooding expected due to climate change.

Through the Recovery Act, NOAA partnered with the North Carolina Coastal Federation to restore 78 acres of oyster reefs. Several large oyster sanctuaries were created in Pamlico Sound, while smaller, intertidal reefs were created throughout coastal North Carolina. This effort helped to speed the recovery of oysters in the state, and support species that rely on oysters for food and shelter. Monitoring conducted through the project also provided valuable lessons-learned about appropriate reef materials to use at varying salinity levels.

The project also created supplemental employment for oystermen, barge operators, tugboat captains, and other water-related industries. Some of these businesses, like Stevens Towing Co., have continued their work in the oyster reef restoration field thanks to the original project.

"This work opened up another avenue of business for us," said Simon Rich, general manager and partner at Stevens Towing Co. of North Carolina. "We are set to begin our fifth season of oyster sanctuary building this spring. This has been a new line of work for us that all started with the original project we did with NOAA and the North Carolina Coastal Federation. We were originally drawn to this work in part because there was a recession at the time, and some of our main industrial customers had slowed down. But mainly it was because we at Stevens all live, work, and play on the North Carolina coast, so we all have a huge interest in seeing the coastal environment thrive."

Last updated by Office of Habitat Conservation on June 02, 2021