Salmon, river herring, and other migratory fish species continue to benefit from habitat restoration projects funded through the American Recovery and Reinvestment Act of 2009. 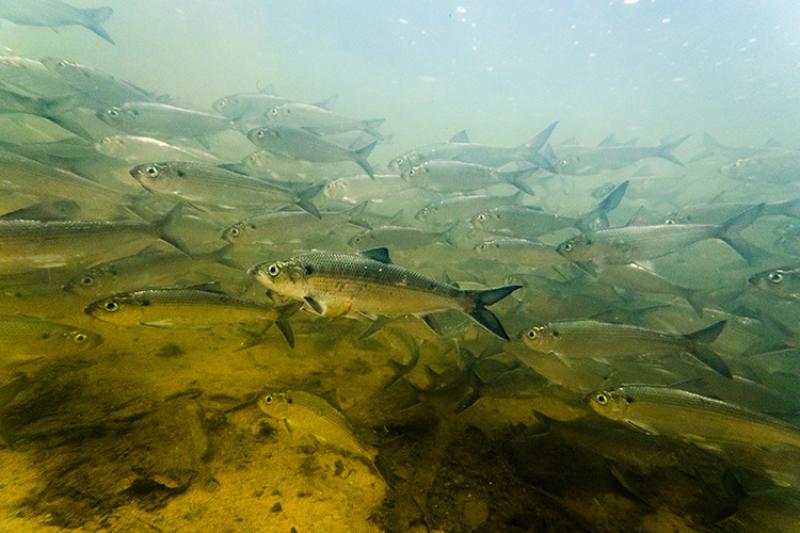 Through the American Recovery and Reinvestment Act of 2009, NOAA funded 125 habitat restoration projects in coastal areas throughout the country. Now, more than a decade later, we’re taking a look back at some of the projects we funded. We’ll explore the benefits this restoration work continues to bring to communities and ecosystems across the country. In Part 2 of this 3-part series, we’re highlighting examples of how Recovery Act projects have benefitted migratory fish.

NOAA received $167 million from the Recovery Act to restore coastal habitat and help jumpstart the nation’s economy. We established 50 cooperative agreements that funded 125 high quality habitat restoration projects in 24 states and territories. They spanned from New England’s salt marshes to the coral reefs of the Pacific Islands.

On-the-ground projects funded through the Recovery Act restored more than 25,000 acres of habitat. They opened more than 670 miles of stream for fish and removed more than 433,000 tons of marine debris. This work provided much-needed habitat for commercial and recreational fisheries, and for threatened and endangered species.

In Maine, the Penobscot River is home to eleven migratory fish species, including river herring, American shad, and American eel. It is also habitat for three species listed under the Endangered Species Act: Atlantic sturgeon, shortnose sturgeon, and Atlantic salmon. But for many years, dams, culverts, water pollution, and overfishing almost completely eliminated many migratory fish species and their habitats from the river. As a result, commercial species like Atlantic cod lost a key food source, and tribal subsistence fishing and recreational fisheries were also affected.

Opening the River to Fish Migration

NOAA partnered with the Penobscot River Restoration Trust to remove Great Works Dam and directly open two miles of the river to access by migratory fish. This dam removal was part of a broader initiative to restore and improve passage in the Penobscot River watershed, and reconnect inland habitat for endangered Atlantic salmon to the Gulf of Maine.

The removal of Great Works Dam allowed NOAA and partners to remove a second barrier, Veazie Dam, years earlier than anticipated. In all, we supported two dam removals plus the construction of a fish passage structure at Howland Dam. These efforts opened nearly 10 miles of river and improved access to nearly 1,000 stream miles in the Penobscot River watershed.

Monitoring the Road to Recovery

With Great Works and Veazie Dams removed, Milford Dam is now the first barrier that fish encounter when migrating up the Penobscot River. Each year, the Maine Department of Natural Resources records the number and species of fish that use the Milford Dam fish lift. This provides an estimate of fish moving upstream during the migration season.

Last year, staff recorded more than 11,000 shad and 1.9 million river herring passing through the fish lift, up from 800 shad and 187,000 herring in 2014. They also recorded more than 1,400 Atlantic salmon—the highest amount recorded in the Penobscot since 2011. Although these data represent just a fraction of the number of fish that historically returned to the river, the increase in numbers is encouraging. Dam removals, fish passage improvements, and other habitat restoration projects on the Penobscot are helping to support and recover these species.

The Klamath River, which flows through southern Oregon and northern California, was once the third largest salmon-producing river on the West Coast. It provides habitat for dozens of native fish species, including Chinook salmon, steelhead trout, and threatened coho salmon. But dams, land and water use impacts, and habitat loss have contributed to declines in fish populations. The decline has impacted tribal, recreational, and commercial fisheries and the communities and economies they support.

Creating a Refuge for Juvenile Salmon

One of the issues facing salmon and steelhead in the Klamath River is a lack of healthy winter habitat. Salmon thrive in cold, clear, water, and they also need areas of calm water to rest when the rivers run high.

Slow-moving areas that are off of the main channel of the river—referred to as “off-channel” habitat—provide important refuge areas for salmon during the winter months. In these off-channel refuges, juvenile fish are protected from high velocity waters during winter floods. Instead of using valuable energy to battle the currents, they can focus on eating and growing in the months before they migrate to the ocean.

NOAA partnered with the Yurok Tribe to restore habitat for salmon and steelhead in Terwer Creek and McGarvey Creek, tributaries to the Lower Klamath River. The project included the creation of two off-channel ponds, as well as the restoration of nine acres of in-stream habitat and 200 acres of streamside habitat. We also constructed a tribal plant nursery.

Prior to this project, NOAA had supported projects to create off-channel habitat in Oregon and Washington, but the technique was relatively new to California. With Recovery Act funding, the Yurok Tribe was able to implement a first-of-its-kind restoration effort in the state.

To monitor project results, the Yurok Tribe tagged fish using the off-channel ponds with passive integrated transponder (PIT) tags and installed PIT tag antennas within each pond. Using those tags and antennas, they were able to see where the fish were coming from, how long they were using this habitat, and how quickly they were growing.

Fish that used the new off-channel habitat were found to grow up to six times larger than fish in adjacent streams, which lacked slow-moving winter habitat. Some of these fish were traveling from streams more than 120 miles away to use these off-channel habitats. This illustrates how important the ponds are for fish throughout the Klamath River watershed.

Since these first two ponds were constructed, NOAA has continued to fund similar off-channel habitat restoration projects. Today, the technique plays an important role in protecting salmon and steelhead in California and beyond. Off-channel habitat restoration has been specifically identified as a high-priority action in recovery plans for threatened species such as Southern Oregon/Northern California Coast Coho salmon and Central California Coast Coho salmon.

Last updated by Office of Habitat Conservation on June 09, 2021