Restoring Habitat to Support Coastal Communities: A Look Back at the Recovery Act—Part 1

Habitat restoration projects funded through the American Recovery and Reinvestment Act of 2009 brought jobs, recreation, and other socioeconomic benefits to coastal communities around the country. 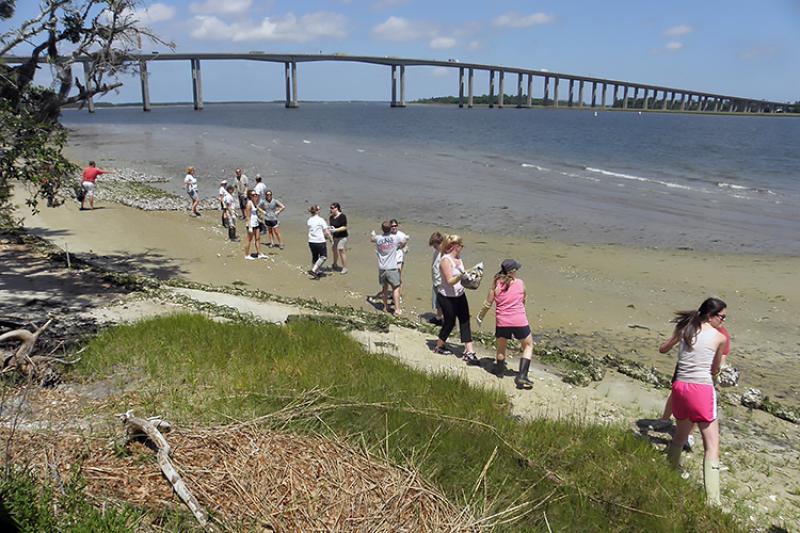 Through the American Recovery and Reinvestment Act of 2009, NOAA funded 125 habitat restoration projects in coastal areas throughout the country. Now, more than a decade later, we’re taking a look back at some of the projects we funded. We’ll explore the benefits this restoration work continues to bring to communities and ecosystems across the country.

In Part 1 of this 3-part series, we’re highlighting examples of the jobs, recreation, and other community benefits that Recovery Act projects have supported. Part 2 focuses on benefits to coastal and marine species. Part 3 explores how Recovery Act-funded projects laid the groundwork for continuing habitat restoration efforts.

NOAA received $167 million from the Recovery Act to restore coastal habitat and help jumpstart the nation’s economy. We established 50 cooperative agreements that funded 125 high quality habitat restoration projects in 24 states and territories. The projects spanned from New England’s salt marshes to the coral reefs of the Pacific Islands.

Below, learn about three Recovery Act projects and the benefits they have brought to coastal communities across the country.

The success of this partnership and the Recovery Act funding led us to expand our work supporting conservation corps programs. NOAA and the CCC worked together to launch the California Veterans Corps Fisheries Program in 2012. This program provides veterans with skills, training, and connections in the natural resource field. Participants help us meet our mission to conserve and manage coastal and marine ecosystems and resources.

Today, our veterans corps partnerships have expanded to include Oregon and Washington. More than 50 veterans have participated in these programs since the partnership started. Many of these veterans have gone on to further their education in the environmental field, and some have even been hired to work at NOAA. Army veteran Ryan Shorrow said participating in the California Veterans Corps was “the best decision that I have ever made in my life.”

NOAA partnered with the City of Charleston to stabilize shorelines and revitalize salt marsh habitat at three sites. In Plymouth Park and along Daniel Island Trail, living shorelines were used to help reduce flooding and erosion. These projects were the first of their kind on city property. On the West Ashley Greenway, a failing pedestrian bridge was restricting tidal flow to a salt marsh. Replacing the bridge restored flow to the marsh, reopened the trail to walking and biking, and allowed for recreational opportunities like kayaking in the restored marsh. Together, these projects restored more than 200 acres of habitat.

Today, these parks, trails, and recreation areas are still much-used by the local community. The shoreline protection measures continue to protect against erosion and flooding. Alongside restored habitat for fish, visitors can use the areas for walking, biking, fishing, kayaking, and more. NOAA also continues to partner with the City of Charleston on projects to restore habitat and benefit the community.

In the 1950s, wetlands at Lost River Preserve in Tampa Bay, Florida, were lost when they were filled for residential development and tropical fish farms. NOAA partnered with Ecosphere Restoration Institute, Hillsborough County and Southwest Florida Water Management District to restore nearly 70 acres of habitat in the area. Work on the project included removing invasive vegetation and restoring tidal flow to wetlands. Restoration of this site provided important nursery habitat for species like snook and spotted seatrout, both popular sportfish.

Like many other Recovery Act restoration projects, this project directly funded the work of several graduate students. They conducted data collection, sampling, and other monitoring efforts. These paid opportunities helped them build skills and experience in the environmental field, serving as crucial stepping stones in their career development.

“My work on the Lost River project was instrumental in allowing me to fund my graduate studies, and I would not be in the position I am today if I had not completed my Ph.D.,” said Dr. Jenny Hinton, who worked on the project as a graduate student and is now a senior program analyst with the Florida Department of Environmental Protection. “Working on the Lost River project was an excellent opportunity to see restoration in action. I’m now in charge of reviewing restoration projects that are proposed as compensatory mitigation, so having first-hand experience with restoration has been a great asset.”

Dr. Aaron Brown also worked on the Lost River project as a graduate student. "Working at the Lost River Preserve gave me my first taste of restoration ecology, which has become the focus of my career. I was able to pivot that position into an internship with the Southwest Florida Water Management District, which turned into a seven-year career working on dozens of restoration projects and culminating with a Senior Environmental Scientist position," said Dr. Brown, who is now a professor in the University of Tampa’s Biology Department and co-chair of the Tampa Bay Estuary Program’s Technical Advisory Committee. "I have stopped by the Lost River Preserve many times since my sampling days ended and am always impressed by the beautiful ecosystem it has become."

Last updated by Office of Habitat Conservation on June 02, 2021