Linda Despres: Overcoming the Odds to Fulfill a Dream

Despite early hurdles facing women going to sea, Linda Despres fulfilled her dream of a marine science career. During her 40 years at the Northeast Fisheries Science Center she spent 1,560 days at sea, and even a few underwater. 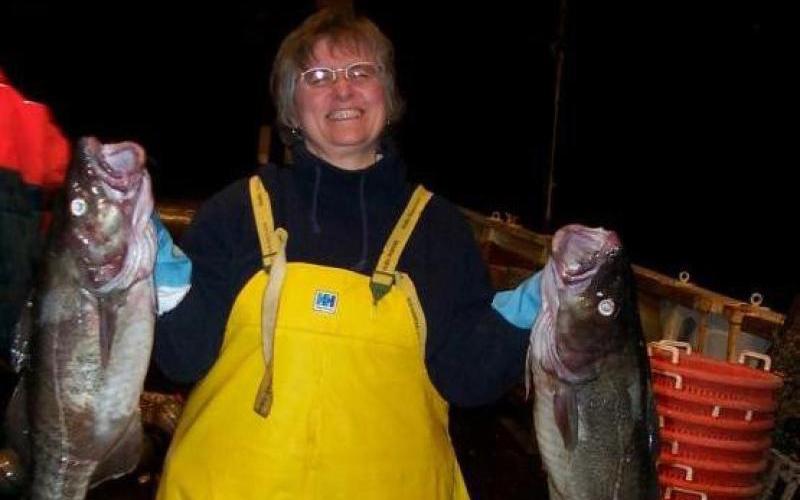 Fishing and spending time on boats is in her blood. Born in Brunswick, Maine, Linda Despres wanted to go to sea from an early age. Her father built a 36-foot sportfisherman named the “Linda Gal.” Starting at age 13, she and her family spent many summers on that boat fishing for tuna, cod, and mackerel. They also island hopped throughout Casco Bay to explore ashore. She watched Lloyd Bridges’ television show “Sea Hunt” and never missed a Jacques Cousteau special. One thing she did miss: seeing female divers or female researchers. Despite that, she took scuba lessons when she was 18 to see what she couldn’t see from a boat.

“I remember thinking that it would be great to have a degree in marine science so that I could be on boats. I never got seasick, and I preferred to be out in the fresh air,” she recalled. “My 1968 high school yearbook indicated that being an oceanographer was my dream job, but back in those days, those were not options for women.”

Undeterred, Despres pursued her dream. At the University of Maine, she focused on ecology, environmental sciences, fish biology, and wildlife biology “in case a job opened up as a game warden.” She graduated in 1972 with a bachelor of science degree in fishery biology.

During the summer of 1970, Despres volunteered at the Maine Department of Marine Fisheries in West Boothbay Harbor. “I was willing to do anything,” she said of the experience. “I spent the summer happily sorting and staging Northern shrimp larvae from plankton samples.” One day an opportunity arose to go to sea on the state’s research vessel to make plankton and fish tows. Her excitement soon turned to disappointment when she was later told she could not go because she would be the only female on board.

“It was a life-changing moment for me,” she recalled. “Somehow I found out that the person who had been in my position the year before was a male and he was able to go out. I couldn’t understand why I had been scrubbed… there shouldn’t be a difference because of my sex.” She contacted the Department of Marine Fisheries office in Augusta and was told she could go out but on a one-day trip. To make that happen, the captain changed the sailing schedule to leave the dock at 2 am and arrive at the first station at dawn. She learned to identify, weigh, measure and dissect fish. “This one-day trip aboard a research vessel parlayed into a 40-year career which not many women had the chance to experience at that time,” she said.

That same summer, her family sailed their boat to Falmouth Harbor. Despres wanted to visit Woods Hole “because Cousteau had been there and there was a world famous marine library there.” She remembers standing across from the Captain Kidd (a restaurant and bar) and saying to herself, “someday I am going to work here.”

The Lure of a Seagoing Career

After graduation, she spent more than a year applying for various state and federal jobs as a biological lab technician, game warden intern, and fish farm biologist. Within a week of each other, she received interview requests from the State of Maine for a game warden position and from the Northeast Fisheries Science Center for a sea-going lab technician. She was interviewed by fisheries biologist Brad Brown, who was committed to diversifying the center’s scientific staff.

Despres started her NOAA Fisheries career on July 2, 1973, three years after her first visit to Woods Hole. Her first cruise was on the 187-foot NOAA Ship Albatross IV. Her second was on the 230-foot Soviet research vessel Belogorsk that was conducting joint bottom trawl survey work with the fisheries lab. “Many staff were not excited about living on a converted commercial fishing trawler with food that was often unidentifiable and with language difficulties,” she recalled. “Since I grew up understanding and speaking French, learning another language was a positive challenge for me.”

“By my third trip, I was in charge of my team and sailed as Watch Chief. I was a motivated fast learner,” she recalled. “I had the great good fortune to sail on French, German, Soviet and Polish research vessels both in the North Atlantic, along France’s Normandy coast and on the Baltic Sea—in January. I made 87 cruises aboard the Albatross IV, 35 trips aboard the 155-foot Delaware II, and five aboard the 209-foot Henry B. Bigelow, along with 17 other trips aboard smaller domestic research vessels. I even got to go down twice in a two-person submarine looking for adult Northern shrimp in the Gulf of Maine.”

At sea Despres frequently sailed as Watch Chief and as Chief Scientist. Ashore, she became a supervisor of technical staff involved in the data collection process on survey cruises. A side interest in fish diseases and parasites led to membership in the International Council for the Exploration of the Seas fish pathology working group.

An opportunity to participate in a U.S. Agency for International Development program working with their Fisheries Department took her twice to Casablanca, Morocco. She assisted their survey staff to organize a standardized fisheries data collection program. While there, she taught the classes in French, and ended up assisting the Moroccan staff to implement the survey process.

Despres became the first woman Chief Scientist on a Center bottom trawl survey in May 1975. “I was so excited about being offered the opportunity, and the fact that the women in the scientific staff would be in the majority for the first time ever … seven women and six men. We were nicknamed the Magnificent 7 + 6!”

She has many vivid memories of trips good and bad, of sailing in stormy weather and developing various ways to sleep and not be thrown from the bunk. Working on the foreign vessels in the 1970s and 1980s brought experiences that filled her diaries and resulted in friendships that endure to this day.

But it is the time spent aboard the Albatross IV that will always be special. Its decommissioning in 2008 was an emotional time for Despres. It was the first ship she worked on, and she was the last chief scientist. To honor its memory, she received a grant to develop an exhibit. It focused on the ship and its three predecessors, the science it conducted, and those who sailed aboard it. The exhibit remains in the center’s Woods Hole Science Aquarium. She wrote an article about the vessel for the Woods Hole Historical Museum’s magazine Spritsail published in 2010.

Despres served on the federal women’s committee for many years and was active in supporting women going to sea. “One of my more memorable yet terrifying moments as a 25-year-old budding female scientist was when I responded to a newspaper article in 1975,” she recalled. Admiral Harrington from the Massachusetts Maritime Academy had implied that women could not withstand the rigors of life at sea. “I am of the personal belief that women are not strong enough to take the profession of the sea. I can’t see women standing watch for 4 hours in a bad storm,” he wrote. Despres replied, noting that “it is only fair to let anyone who desires the education in any particular field to have at least the exposure and to later make the decision whether or not to continue. Women wouldn’t always feel as if they had to prove themselves in their work if men would base their opinions on a person’s ability and not on their sex.” Six women were admitted to the academy in 1977.

Her contributions have been honored with the center’s Judith Brennan-Hoskins Award in 1987 for dedicated service and research excellence, and a 1988 Science and Research Director Award. In 2001 she and colleagues received a U.S. Department of Commerce Bronze Medal “for developing, testing and implementing a new automated data acquisition system for National Marine Fisheries Service fishery research vessels.” She has been featured in two books, a volume on women in natural resources, and numerous newspaper articles.

When Despres retired on July 2, 2013, she had sailed for 1,560 days at sea on bottom trawl, northern shrimp, surf clam, and sea scallop surveys. Having experienced her dream career, she is grateful to those whom she worked with and was taught by, and the countless people whom she met and remain as friends.